Climate How Finland uses the revitalization billions provided by the EU: Support for the installation of heat pumps, job charging points and the hydrogen industry 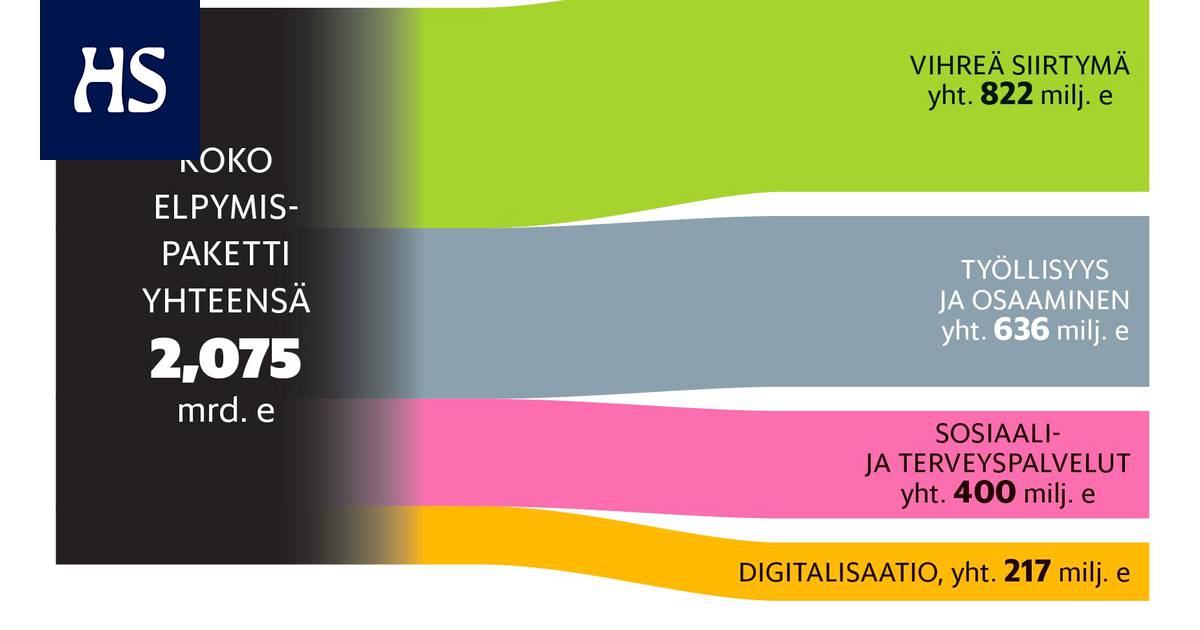 Much less support is being given to reducing emissions from transport than to energy production and industry.

EU Grants from the recovery package can significantly accelerate the phase-out of fossil fuels in Finland. The largest emission reductions are estimated to come from energy production and industry. They also receive significantly more support than, for example, the transport sector.

The Treasury minister Matti Vanhanen (Central) On Monday, the government presented a preliminary plan for how EU grants will be used. About half of the € 2.1 billion pot is in one way or another to accelerate the green transition.

The plan provides for more than EUR 800 million for the promotion of low-carbon solutions for industry and energy production, in addition to which almost EUR 270 million will be allocated to research and development. The allocation of R&D funds also emphasizes the development of climate solutions.

Government intends to distribute EU grants, inter alia, by supporting investment in electricity, heat and gas networks. To this end, a new support program will be set up with more than EUR 150 million.

Another pot of more than 150 million will be set aside for the introduction of new energy technologies, especially for large-scale pilot plants.

According to the government’s plan, this support could promote investments in, for example, offshore wind power, biorefineries using new types of raw materials or industrial-scale heat pumps.

Both grants will be prepared and distributed so quickly that the first construction work could start as early as next year.

Investment will also be accelerated by investing € 12 million in EU grants to increase the resources of licensing authorities.

The government intends to support the production of zero-emission hydrogen and the capture and utilization of carbon dioxide in industry with EUR 150 million. In addition, EUR 60 million will be used to support the improvement of energy efficiency and the electrification of processes.

Instead EU money is less available for transport emission reductions, at € 40 million. This is despite the fact that reducing the sector’s emissions in Finland has proved particularly difficult, and the current measures do not achieve the government’s carbon neutrality goal.

EUR 20 million from the pot will be set aside to support the construction of electric car charging points in housing associations. The support already in use will be increased and expanded so that jobs can also apply for support.

Another 20 million will be used to boost the public network of recharging points and biogas filling stations by increasing support for transport infrastructure.

The abandonment of oil heating by small houses and municipalities will be accelerated with a subsidy of EUR 70 million.

In the future, in addition to housing companies, jobs can apply for support for the construction of charging points for electric cars.­Picture: Jussi Nukari

Preliminary It is estimated that investments accelerated by EU grants could reduce Finland’s annual carbon dioxide emissions by six percent by 2026.

However, the figures are indicative only, as emission reductions depend on which individual projects ultimately receive subsidies.

Preliminary calculations also do not include the potential emission reduction effects of all financing projects. For example, a deficient charging network is seen as a significant slowdown in the electrification of traffic, so investment in the network can boost electric cars and reduce traffic emissions.

Subsidies for circular economy investments included in the program can also help reduce emissions. EU money is being channeled, for example, into the use of by-products and recycled materials in the construction industry, and the industry estimates that this could significantly reduce emissions from, for example, cement production.

To the plan there may still be changes. The government is due to approve the final plan by the end of April.

The plan first goes to the European Commission for evaluation, after which it is approved by the Council of EU member states.

‘Now I’m coming back’, the goodbye forever of another absurd death due to insecurity