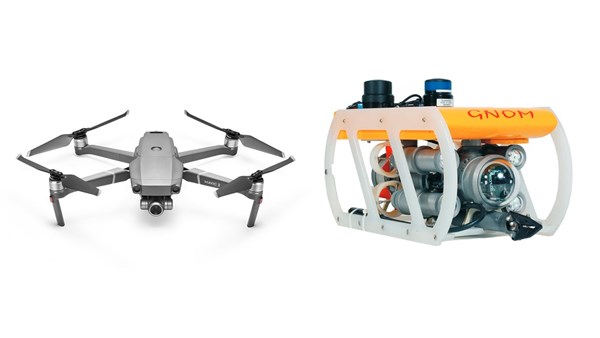 As part of its participation in the global celebrations of “World Oceans Day”, on June 8, 2021, which highlights the theme of the ocean under the title: “Life and Livelihoods”, and to promote the use of modern technologies in achieving sustainability at the level of all sectors, the Ministry of Climate Change and Environment launched a project A “pilot” research study for a vital digital survey of marine habitats in the UAE, based on drone technology and underwater robotic survey and measurement devices, for the first time in the region.
The study aims to measure the level of success of this type of technology in drawing an accurate digital map of marine habitats at the state level, and to compare its results with what is achieved by regular survey systems that rely on divers and traditional manual measurement.
For his part, Sultan Alwan, Acting Undersecretary of the Ministry of Climate Change and Environment, said: “Strengthening the innovation system and increasing the rate of employing modern technologies in achieving sustainability is one of the strategic objectives of the Ministry of Climate Change and Environment, which it is working to achieve in line with the goals of the UAE Vision 2021 and the UAE Centennial 2071, and the leadership’s directives. the rational.”

He added: “The study comes within the framework of the ministry’s work to achieve a set of its strategic objectives, which includes strengthening efforts to work for the climate, by studying the effects of climate change on marine habitats, and enhancing efforts to protect these habitats to ensure the sustainability of marine biodiversity, and it will also contribute to strengthening and supporting the system.” Research at the country level in general, where the experiment will combine the two techniques of aerial bio-digital survey using drones and the use of underwater marine survey robots to conduct the survey, and the success of the combination of the capabilities of these two technologies will be measured, and the accuracy and validity of the information and data that will be collected will be compared. With what traditional methods combine, and the outcomes of the experiment will be fully provided to all parties concerned with the marine environment in the country, and for academic institutions to enhance the research and study capabilities of their students.”
Alwan pointed out that the study’s ability to prove the success and accuracy of the applied new technologies will motivate specialists, academics and students to launch similar studies based on developing technologies and experimenting with the use of new technological systems in the study and mixing available technologies to benefit from their capabilities.

coral bleaching phenomenon
It is noteworthy that the increase in sea water temperatures caused by climate change is one of the most important reasons for the deterioration of marine habitats, especially coral reefs, represented by the expulsion of microscopic algae that live inside coral reefs, which causes the phenomenon of “coral bleaching”, which loses its role as a natural habitat for diversity. marine biology. According to survey studies of the Arabian Gulf waters, the efforts made have contributed to enhancing the capabilities of coral reefs to adapt to rising temperatures, as they developed their genes, which contributed to increasing the ability of some species to recover by more than 70%.