Claudio Magris: “The pandemic will change the world more than World War II” 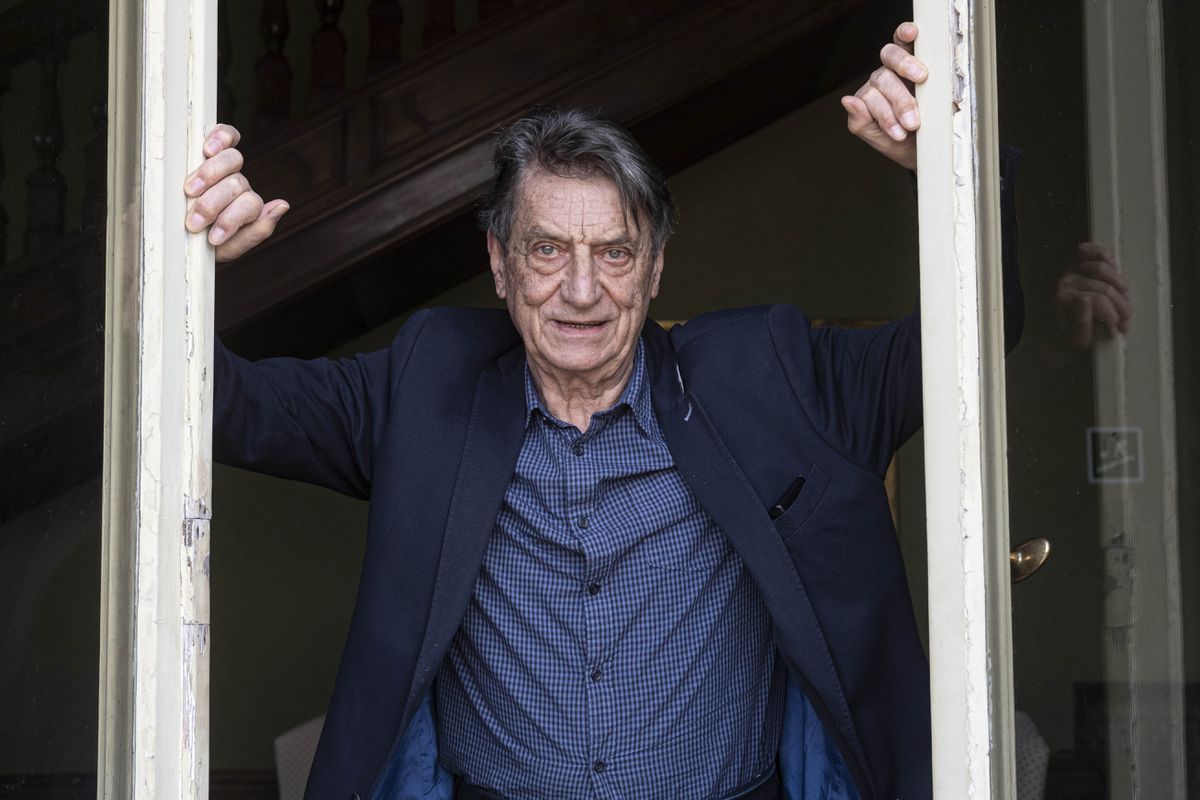 Claudio Magris (Trieste, 82 years old) has spent the pandemic confined in his home in Trieste (northern Italy). It has not been his best year. In no sense. One day he found himself staring out the window, not even wanting to read. Life locks us up sometimes: it has been a long time since he has been in the famous café of San Marco, where he enjoyed a certain anonymity on endless literary afternoons. But he has just been vaccinated and has traveled again. In the garden of the residence of the Spanish Embassy in the Roman Gianicolo, the author of Danube (Anagrama, 1986), the legendary tale with which he crossed the Iron Curtain and the wall of old Europe three years before it was demolished, is in a good mood. “It has not been the best period. But I haven’t died ”, he jokes.

Magris is the latest in a line of great Italian intellectuals and writers who deciphered Europe: its roots and its horizons. Germanic head and Italian soul, he has been a translator, critic, inveterate reader, traveler and even senator of the Italian Republic. He received the Prince of Asturias Award for Literature in 2004 and continues to be a beacon of culture and thought in Italy, despite the fact that it has been somewhat absent in the last year and a half.

Question. How are you these days?

Answer. It is very difficult to say. This period has coincided, by some combinations, with a stage in my life that I am not going to talk about here, but which has not been easy and has made everything more complicated. A time in which I have run the risk of concentrating too much on this aspect that I am telling you.

P. What impact has the pandemic had on you?

R. Disgust, fear, crisis, death, chance … It is impressive to see all this disaster and understand that you can never be sure. I have suffered a great discomfort, as if I had been punched by Cassius Clay … well he would have killed me completely. You try to survive, not to be defeated. But something that impressed me a lot was what I was reading to an Italian writer, now I don’t remember his name, which explained how during the first period of the pandemic, when we were most locked in, he lost the desire to read.

P. Just because he had more time?

R. The same thing happened to me. I lived a period in which I did what I could, went through my worries and kept the idea of ​​living, of course. But when I had nothing to do, I found myself negatively staring out the window in a state of latent depression. Reading or other art forms cannot be a fun to spend time waiting for the train. The fact of having so much time for the first time made it an empty time. And the reading became a false reading. A depressed reading.

“The fact of having so much time for the first time made it an empty time. And the reading became a false reading. A depressed reading “

P. Has it also happened to you with the desire to write?

R. I truly believe that in 2019, with the last book that I consider to have written, Curved Tempo to Krems… [hace un silencio]. Look before writing a book you have to have experiences, make a path, create a whole backpack. I wrote Danube after having traveled. And not only materially. I did it in my head, in my heart, in the car, with the boats … And now I don’t believe, and I mean it honestly even though it does bad publicity for me, that I am at the moment to start with the idea of ​​a book of a certain consistency. The point where that experience ended was with that work [Tempo curvo a Krems, que publicará Anagrama en septiembre].

P. He considers his experience as a writer concluded …

R. I would not say finished … I have been very happy with some works.

P. The pandemic devastates inner and outer worlds. Do you think we will live in a very different one?

R. Many political or cultural considerations can be made. But what strikes me is that it will change the world more than World War II. I belong to a generation for whom the present is not only today, Wednesday at noon, the day of the Second Republic in Spain. It is a somewhat longer time. My children did not see World War II, but it is part of their experiences, of what was present in their house. And now there is a kind of fragmentation of that time.

“The market is no longer perceived as an efficient system, but as the measure of life. And that is something that troubles, because the social and labor distances increase “

P. Had you lived it before?

R. When I was teaching at Bard College in Annandale-On-Hudson [Nueva York, donde también fue profesora Hannah Arendt] About 15 years ago, only 5 or 6 students in a class of 36 knew who Stalin was. I told them we couldn’t go on. It was not like naming an important Asian sovereign from centuries ago. Stalin is part of a lived world, with all its betrayals, millions of deaths in the name of certain ideals … Something that marks you not only in the short time of the day. It would be like taking a course on love at Flaubert and some not knowing what love or sex is. Should I start by talking about the organs of the human body? And that is something that has been accentuated in an incredible way. And it makes me feel, somehow, close to death. Because death is cancellation. And to observe how everything that I feel as a lasting present is erased produces a wound.

P. Will the cultural impact that it will cause and the new elements that will form the next present of that generation be comparable to that of the great wars?

R. You have to try not to be an integrated or an apocalyptic, as Umberto Eco said in his book. I have no will to die, even if it is not very far that day. But my death cannot be lived as the death of the world. So I do not know. But this distance relationship that we all maintain now will modify the political and social balance. When 40,000 workers came together in the Fiat, the force that emerged was automatic. The market is no longer perceived as an efficient system, but as the measure of life. And that is something that disturbs, because social and work distances increase. Think about the riders who bring us food and earn one euro per order. A new type of classes will be created that are not in conflict, however. I have no instruments to judge this change. But as I was saying, above all, that short memory impresses me.

P. Chronological time has continued to elapse during the pandemic, but the biographies of many people have been frozen. What kind of relationship will we have with this memory and what identity will be created?

R. I do not know what the memory of these days will be, but think of all the language of social networks concentrated in an instantaneity. When memory becomes so short that it seems that what happened this morning belongs to the times of the Reconquest, the relationship we maintain with identity is altered. Also with literature.

P. How will the pandemic change our relationship with death?

R. It’s hard to say, but it can be compared to what I remember from WWII and the bombings. There is something of it in this nightmare of the pandemic. But there was a certain hidden meaning in something like destiny. In this case, it is something more mysterious, which takes away some of its momentum. I am somewhat puzzled.

P. For some time, Italy has experienced unprecedented populist turbulence. What happened?

R. I do not know. But I confess that this radical transformation of politics has caught me very unprepared. I saw her, yes. But I admit a bewilderment, and I hope I understand it before I die. Because it is not just populism. There was a positioning of many people who believe they are on the left and behave as if they were on the right.

R. A cultural distortion: the black poet who refused to have her verses translated by a white man. Many took it as a progressive stance, when it is just racist. Just as it would be to say that an English or Spanish writer cannot be translated into English by an African American. I think about what my friend Édouard Glissant, a great writer from the Antilles, who fought for the liberation of his people and for all the cultural diversity of his islands, would have said: “The roots must not deepen the atavistic darkness of the origins, but extend into the surface like arms, like branches of a tree. Not to cancel our own diversity, but to turn it into something that allows us to find ourselves ”. And diversity is reciprocal. That is why the words of that poet cannot be interpreted as progressive.

“I never thought that I would see in the central square of Warsaw, the one that was destroyed by the Nazis, people who marched with swastikas and swastikas”

P. If today you were to embark on a project like DanubeHow would you count this Europe?

R. It’s hard to say because when I started writing it I didn’t know what I would do. A book is born on the way. You can’t tell what book you would do, it’s like talking like that about a child you haven’t fathered. But something that hurts me a lot is that today the hopes of many countries and the Danubian world seem to deny themselves. I never thought that I would see in the central square of Warsaw, the one that was destroyed by the Nazis, people parading with swastikas and swastikas. So you can’t ask me this … because surely today I wouldn’t write the Danube. But you know what?

R. Sometimes I have the feeling that if I exist in the world it is thanks to Spain. If the Danube Spanish, perhaps it would not have been translated into the other 30 languages. There was a strange connection that had never happened to me before. Great discussions and debates, but never a single misunderstanding. I feel like we speak a common language.

P. You have always vindicated that other shared idea: European patriotism. Is that feeling still possible with everything we are seeing?

R. Look, I have always dreamed of a Europe as a state. A state with a Constitution in which, naturally, each part of the state has its diversity. As in Italy with the regions, but on the basis of a common Constitution. And from that point of view, I am a European patriot. We are matrioskas. But a common basis is needed for there to be a European patriotism that is becoming increasingly rare.

P. In his book Snapshots (Anagrama, 2020), there is a chapter called Selfie in which it is observed with disgust. What portrait of yourself do you have at this moment?

R. Essentially it is a self-deprecating portrait. I am not worse than the others, but it is as if I had the feeling of ordering some things in my life, also from the past, but it is already impossible. Time is relative, I wrote a book calling it curved … But look, you have arrived here at 12 and now it is already one o’clock.

The innovation of a surveillance camera blinking and raising its eyebrow

Conurbano: they find six horses injured by mistreatment that were used for blood traction