CIV Mugello: Pirro is again champion with a double 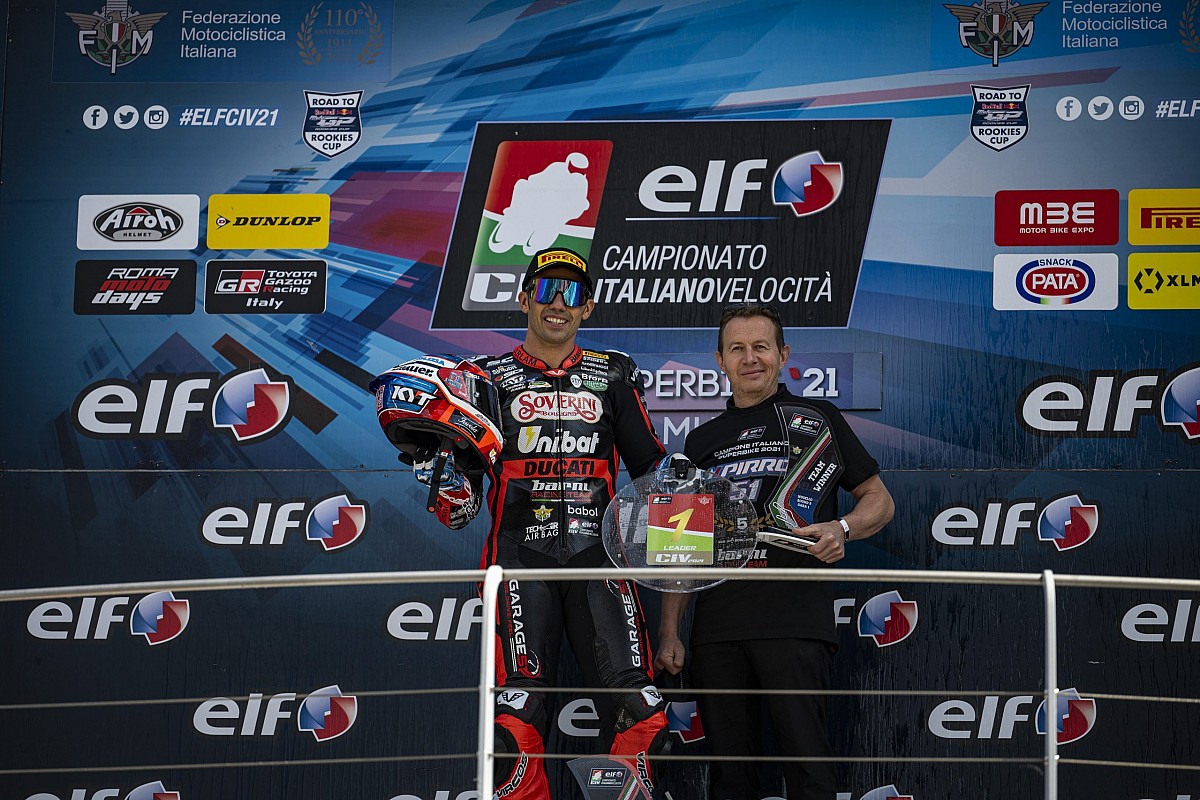 Mugello crowns Michele Pirro, who wins the Italian title with one round early and celebrates with a new double, thus winning nine of the ten races disputed this season. Superbike arrives in Vallelunga, the last round of the weekend, once the games are over. The titles, on the other hand, are still to be assigned in the other classes, where certainly the show was not lacking on the Tuscan track.

Saturday – The first of the two rounds of Round 5 ELF CIV at Mugello was enough for the rider of the Ducati Barni Racing team to rise again on the throne of the Italian SBK and become category champion for the fifth time, bringing to eight (5 in SBK, 1 in SS600 and 2 in Stock1000) the number of Italian laurels obtained in his fantastic career. His was an extraordinary year, with eight victories and a second place obtained so far. In the race Pirro simply dominated, quickly taking the lead and fleeing alone to victory and the title. On the other hand, technical problems for Lorenzo Zanetti (Broncos Racing Team), Pirro’s first rival in the championship, returned to the track after a forced stop in the pits and 11th at the finish. Second step of the podium for Flavio Ferroni (Aprilia Nuova M2 Racing), on the second podium of the season, while Alessandro Delbianco (Honda DMR Racing) ruled under the checkered flag Lorenzo Gabellini (Honda Althea Racing Team) for the third position. In the championship Pirro is mathematically champion with 220 points, followed by Zanetti (136 points) and Delbianco (117 points).

Sunday – Doubles and finishes at the photo finish in the Sunday races of Round five ELF CIV 2021 at Mugello, with Pirro dominating the SBK and also making race 2 his own by winning solo. Left alone in the lead after Alessandro Delbianco (Honda DMR Racing) crashed on the fifth lap, with him until then and 10th at the finish line, Pirro drove his Ducati with ease to the checkered flag. Conquering the ninth win of the season out of ten races. Spectacular as regards the fight for the remaining steps of the podium, with Luca Vitali (Honda Scuderia Improve by Tenjob) 2nd in front of Niccolò Canepa (Yamaha Keope Motor Team), with a podium where three different manufacturers stand out: Ducati, Honda and Yamaha . Lorenzo Gabellini (Honda Althea Racing Team) was fourth by a few cents, while a problem at the start forced Lorenzo Zanetti (Ducati Broncos Racing Team) to eighth place. In the championship the former Italian champion Pirro reaches 245 points, followed by Zanetti (144 points) and Vitali with (128 points).

Saturday – Matteo Bertelle confirms himself in great shape, and wins the victory in Race 1. The Pata Talento Azzurro FMI driver of the Minimoto Team on KTM managed to regulate his escape companion Elia Bartolini at the finish line, forced to settle for second place for only 44 cents. The standard bearer of the Bardahl VR46 Riders Academy on KTM still remains at the top of the general classification with 153 points, two more than Bertelle, with Pasquale Alfano (Protech Racing Team PRT, tenth in the race) third, 53 points behind the leader. Podium of the day completed by Zonta Van Den Goorbergh (D34G Racing), good at prevailing in the final over Andrea Giombini (Team Minimoto), Biagio Miceli (Junior Team Total Gresini) and Alessandro Sciarretta (SGM Tecnic).

Saturday – Once more Supersport offers a show and overtaking, with many riders fighting for the top positions. Among these, honorable mention for Federico Caricasulo (Yamaha), who at Mugello conquers his third consecutive victory, getting even closer to the top of the standings. The number 64 preceded Andy Verdoia (Yamaha Gomma Racing) and Davide Stirpe (MV Agusta Extreme Racing Service) by a few tenths. Only 7th the championship leader Roberto Mercandelli (Yamaha Team Red and Black), who maintains the leadership with 134 points, against the 122 points of Massimo Roccoli (today 4th at the finish line) and the 121 points of Stirpe.

Sunday – Double for Caricasulo in SS600: great show in Race 2 for Supersport, with Federico Caricasulo great star. The Yamaha rider has in fact repeated yesterday’s victory today, managing to overtake his opponents in the final and pass the finish line first. No holds barred battle for the other places on the podium, with Davide Stirpe (MV Agusta Extreme Racing Service) 2nd ahead of Matteo Patacca (Yamaha Bike and Motor Racing Team). Great result for Patacca, the first podium in the category for the Pata Talento Azzurro FMI driver, the only one in the SS600. Fight more open than ever regarding the title: Roberto Mercandelli (today 4th, Yamaha Team Red and Black) keeps the lead with 147 points, but is closely followed by Stirpe (141 points), Massimo Roccoli (8th today Yamaha Promo Driver Organization, 130 points) and today’s winner Caricasulo (125 points).

Saturday – Race 1 full of surprises in the entry class, starting with the fall of the poleman Leonardo Zanni, who fell to the ground while he was leading the solo race. The departure of Zanni triggered the fight for victory between Cesare Tiezzi (AC Racing Team), Alex Venturini (Team Runner Bike), Guido Pini and Alberto Ferrandez Beneite, good to recover despite the start from 29th position. The battle ended with Tiezzi winning in front of the two Pata Talenti Azzurri FMI drivers Venturini and Pini. And with Ferrandez Beneite fourth, penalized by one second for track limit. All in a category where the very young drivers wear the Red Bull Road to Rookies Cup logo on their suits, to testify the path that can bring the best talents to the world championship. In the overall standings the leader is Ferrandez Beneite with 128 points, followed by Riccardo Trolese (M&M Technical Team, 10th at the finish line after starting from the bottom) with 123 points and Edoardo Liguori with 105 points.

Sunday – Premoto3 podium enclosed in 82 cents: Many young talents in the ELF CIV entry class, fighting for success until the last meters. In a crazy last lap it was the poleman and Pata Talento Azurro FMI driver Leonardo Zanni (AC Racing Team) who triumphed, ahead of his team mate Cesare Tiezzi by just two thousandths. Podium completed by Edoardo Liguori (Team Pasini Racing), followed by Riccardo Trolese (M&M Technical Team) and Alberto Ferrandez Beneite (Team Runner Bike), able to conquer a place among the first despite the start from the bottom. All in a category where the very young drivers wear the Red Bull Road to Rookies Cup logo on their suits, to testify the path that can bring the best talents to the world championship. In the championship Ferrandez Beneite leads the standings with 139 points, followed by Trolese (136 points) and Liguori (121 points).

Saturday – The duel that has animated the category so far was also repeated in race 1 at Mugello, with the championship leader Matteo Vannucci (Junior Team AG Yamaha PATA) and his first pursuer Bahattin Sofuoglu (Yamaha) able to quickly greet the rest of the group , to play the victory alone. The latter went to the Turkish driver, good in the most classic of sprint finishes to mock the opponent for only 11 cents. Great battle on the finish line also for third place, won by Leonardo Carnevali (Box Pedercini Corse Kawasaki). In the championship Vannucci remains firmly in the lead with 186 points, against Sofuoglu’s 135 points, with Hugo De Cancellis at 90 points (Prodina Team Kawasaki, ninth in the race).

Sunday – Sofuoglu keeps alive the title speech in SS300: never underestimate the temper of Bahattin Sofuoglu (Yamaha), able to score a double at Mugello. After the success in Race 1, in fact, the Turkish rider repeated himself, triumphing against Matteo Vannucci (Junior Team AG Yamaha PATA). Once again the two star drivers in the category managed to make the difference against the rest of the group, coming to compete for the race on the final straight, where Sofuoglu used the effect of the slipstream to mock Vannucci. A close fight also for third place, which went like yesterday to Leonardo Carnevali (Kawasaki Box Pedercini Corse). The fight for the title is still open, with Vannucci first at 206 points, followed by Sofuoglu at 160 points and Carnevali at 101 points.