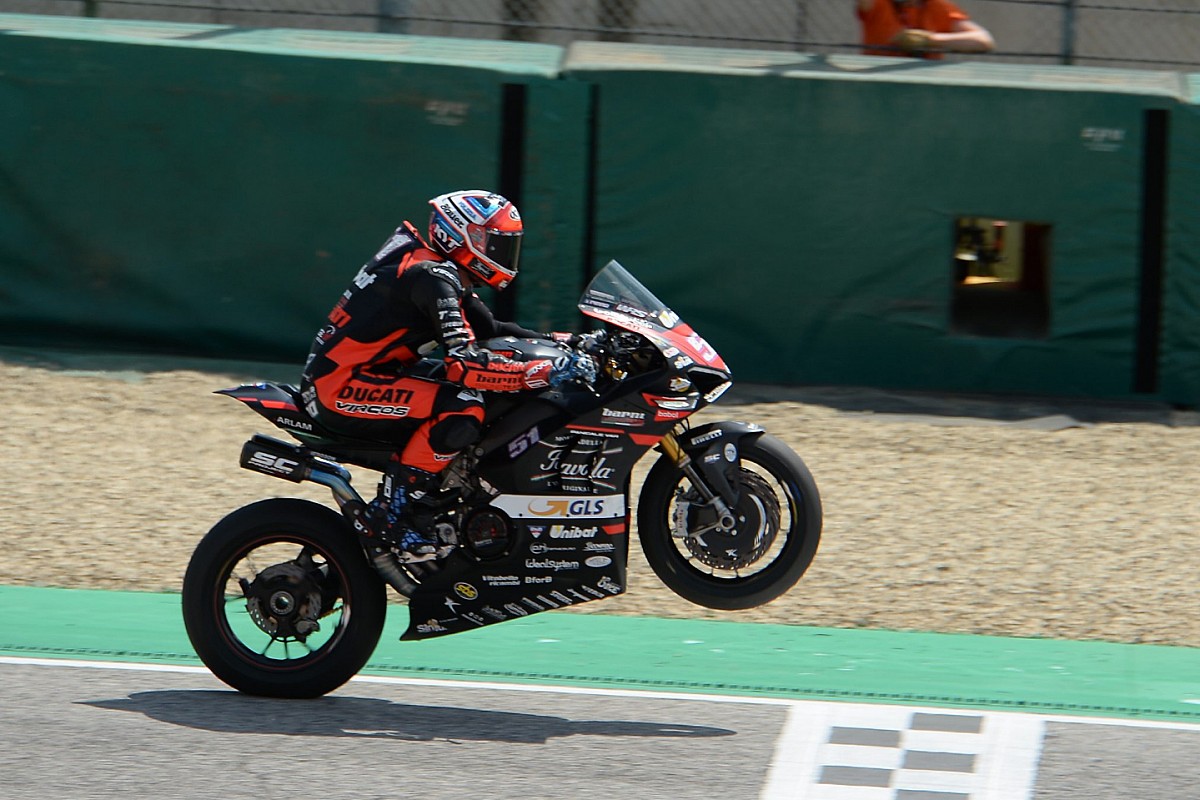 Great spectacle and uncertain weather were the ingredients of an incredible third round of the 2021 CIV season. Michele Pirro confirmed his dominance in Race 1 by winning the fifth victory out of five races. But just when the reigning champion seemed to have no rivals, Lorenzo Zanetti launched the attack, interrupting the hegemony of the rider Barni and winning Race 2. But here’s how the Superbike and other classes went.

Saturday – Ducati rider Barni Racing took home his fifth victory out of five races in this ELF CIV 2021, returning to the top step of the podium in Imola, where he had been missing from the Italian SBK since 2017. All after starting from pole. Behind him, Lorenzo Zanetti’s attempt to win was in vain. The Ducati rider Broncos Racing still closed six tenths behind the Borgo Panigale Tester. Third position, more than 10 seconds behind the leaders, for Luca Vitali’s Honda Scuderia Improve by Tenjob. In the general classification Pirro is first with full points (125 points) ahead of Vitali (75 points) with Zanetti third with 70 points.

Sunday – Race from difficult weather conditions in SBK, with drops of rain that began to fall on the asphalt of Imola during the heat, which was interrupted on lap 14 with the display of the red flag and the ranking updated on the previous lap. The victory, the first for him in this ELF CIV SBK 2021, went to Lorenzo Zanetti. The Ducati Broncos Team rider battled throughout the race against the Ducati Barni di Pirro, managing to stay ahead of the multiple Italian champion at the most important moment. With Pirro who therefore obtains the second position and thus sees his streak of consecutive victories in the season interrupted at 5. Third place for Lorenzo Gabellini’s Honda Althea, good at staying close to the leaders, third podium for him this year. Bad luck for Luca Vitali (Honda Scuderia Improve by Tenjob), hit by Ruiu’s BMW while fighting with the leaders and forced to retire. In the general classification Pirro is always the leader with 145 points ahead of Zanetti with 95 points and Vitali with 75 points.

Saturday – Endless emotions in Moto3, with the victory going to the Bardhal VR46 Rider Academy KTM rider, fresh from his full-time debut in the Moto3 World Championship, Alberto Surra. A race where the “world” riders present in the Moto3 ELF CIV made it as masters. On the track there were three to fight for the victory, Elia Bartolini, Matteo Bertelle (Team Minimoto KTM) and Alberto Surra, with Alex Millan (D34G Racing BeOn), present to replace Van den Goorbergh, always close to the leading trio. A battle lasting all 14 laps of the Moto3 race, which at the very last lap, in the low variant, saw the contact between Bartolini and Bertelle while they were leading. Fall for the two protagonists and space for Surra, who returns to the top positions, with Milan second and Lorenzo Bartalesi (SGM Tecnic BeOn) closing the podium. Pasquale Alfano (Protech Racing Team PRT KTM), who passed in third position under the checkered flag, was then penalized by 5 seconds for overtaking under the yellow flag. In the general classification Bartolini is at the top with 95 points followed by Alfano at 62 points and Bertelle at 60 points.

Sunday – The Pata Talento Azzurro FMI driver on KTM of the Minimoto Team defeated all his rivals on the track, competing on his own and going to triumph alone with almost six seconds ahead of his pursuers. Also signing the new record lap (1’57.969). Extraordinary performance that confirms Bertelle’s talent, after the recent victory at the Red Bull Rookies Cup at Sachsenring, a competition in which the young driver is competing alongside the ELF CIV. Second position for Alberto Surra. Great weekend for the Bardhal VR46 Rider Academy rider on KTM, who gets another podium after yesterday’s victory. Results achieved after having entered the World Championship permanently in the Snipers Team replacing Salac. Third step of the podium for Alex Millan (D34G Racing BeOn), present at Imola to replace Van Den Goorbergh. Bad luck for Elia Bartolini. Started from the last row by a decision of the race direction due to yesterday’s contact with Bertelle, Elia was playing for the podium with Surra and Millan, only to run into a technical failure that forced him to retire. Bartolini who consoles himself with the top of the general, where he is the leader with 95 points ahead of Bertelle with 85 points and Surra with 76 points.

Saturday – Roberto Mercandelli. The Yamaha Red and Black Team rider took his second victory in this 2021, going to triumph with more than 6 seconds ahead of his rivals. And regaining the top of the standings. Behind him there was a tussle up to the last centimeter of the track for the other top positions. After a succession of overtaking and counter-overtaking, it was Davide Stirpe (Extreme Racing Service MV Agusta) who finished in second place ahead of Marco Bussolotti (Axon 7 Team Yamaha). Two of the protagonists of the Championship were both out: Federico Caricasulo (Yamaha) and Massimo Roccoli (Promo Driver Organization Yamaha). In the championship standings, Mercandelli is again at the top with 81 points ahead of Bussolotti with 75 points and Roccoli with 74 points.

Sunday – Show in SS600, with four riders fighting for the final victory. Marco Bussolotti triumphed under the checkered flag. First victory for him in this ELF CIV 2021, with the Axon 7 Team Yamaha rider author of an amazing final part of the race that allowed him to get the better of his rivals. Kevin Manfredi arrived just two tenths from Bussolotti. The Yamaha rider had the merit of keeping pace with his rival until he reached the second position, with the Championship thus finding one of its protagonists. Third final place for a tenacious Davide Stirpe (Extreme Racing Service MV Agusta) with Stefano Valtulini (Rosso Corsa Yamaha) at the foot of the podium and Massimo Roccoli (Yamaha Promo Driver Organization) fifth. Out due to a technical problem Federico Caricasulo (Yamaha). In the championship standings Bussolotti is now at the top with 100 points ahead of Mercandelli (Team Red and Black Yamaha, eighth in the race) with 89 points and Roccoli with 85 points.

Saturday – Group race in Premoto3, with the very young ELF CIV talents, all at the start with the Red Bull Road to Rookies Cup brand on their suits, battling on the ups and downs of Imola. After a long tussle, the Pata Talento Azzurro FMI driver Edoardo Liguori (Team Pasini Racing 2WheelsPoliTo) triumphed in front of Alex Venturini (team Runner Bike) with Jose Salvans Juarez (M&M Technical Team) to close the podium. And with Flavio Massimo Piccolo (D34G Racing BeOn) fourth due to the variant cut on the last lap. In the general classification Ferrandez, absent because he is involved in the Talent Cup, is always at the top with 95 points with Trolese second at 64 points (sixth in the race) and Piccolo at 62 points (fourth in the race).

Sunday – Great emotions also in Premoto3, with a four-way battle for the first position. To win, thanks to an extraordinary final overtaking, was the driver of Davide Giugliano’s Team, pilot part of the Pata Talenti Azzurri FMI project, Flavio Massimo Piccolo. Behind him, two tenths away, Cesare Tiezzi (AC Racing Team CS) with Riccardo Trolese (M&M Technical Team) third and Edoardo Liguori (Team Pasini Racing 2WheelsPoliTo) at the foot of the podium. All for a category in which the riders wear the Red Bull Road to Rookies Cup logo on their suits, to testify the path that can bring the best talents to the world championship. The race was interrupted on the fifth lap with exposure of the red flag caused by the crash of Santi and the fact that the driver remained on the track. Race then resumed with a quick restart procedure over a distance of 8 laps. In the general classification Ferrandez, absent because he is involved in the Talent Cup, is always at the top with 95 points followed by Piccolo at 87 points and Trolese at 80 points. The race classification is sub judice due to a technical check on Tiezzi’s bike.

Saturday – Great battle also in SS300, decided in the last meters, when the poleman Bahattin Sofuoglu ran into a fall at the low variant while he was in the lead. The victory went to Hugo De Cancellis (Prodina Team Kawasaki) with Matteo Vannucci (Junior Team AG Yamaha PATA) to conquer the second step of the podium. Both drivers are good at remaining in full fight for victory throughout the race. Third place for Omar Bonoli (Team Runner Bike KTM) returned to the top positions. In the general classification Vannucci is the leader with 96 points followed by De Cancellis at 57 points and Vocino (4th in the race) at 55 points.

Sunday – Head to head in SS300, with Bahattin Sofuoglu (Yamaha) and Matteo Vannucci who gave life to a race made up of overtaking and counter-overtaking, decided only in the last meters. In the end it was Kenan’s grandson who triumphed, with Junior Team AG Yamaha PATA rider finishing in second position. First success at the ELF CIV for the Turkish. Behind them a foursome fight for the remaining top position, with the third step of the podium finally conquered by Emanuele Vocino (GradaraCorse PZ Racing Kawasaki). In the championship standings Vannucci is the leader with 116 points ahead of Vocino at 71 points with Sofuoglu at 70 points.