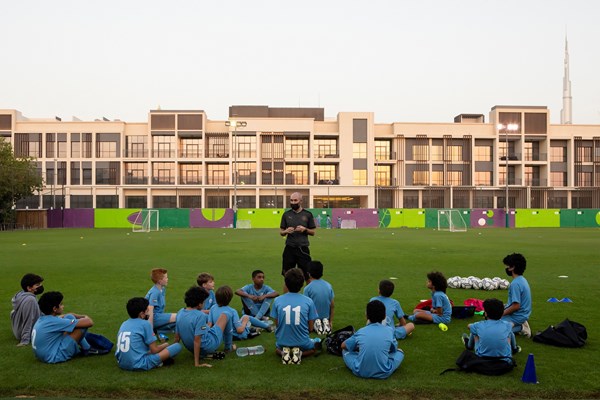 Abu Dhabi (Etihad)
City Football Schools returns to organizing training sessions after the summer break, with an expanded team of expert coaches, and new and distinguished locations in Abu Dhabi and Dubai, and the new season begins next Sunday.
With the addition of new coaches from Manchester City, who were involved in the development process at Al Ittihad Stadium in Manchester, the number of “technical staff” has become 20 coaches, all of whom have extensive experience.
The sites for organizing the new training sessions include The Sevens Stadium in Dubai, while other training destinations are preparing for the start of the new training season with their upgraded facilities.
City Football Schools organize their training sessions in 6 locations, all enjoying world-class facilities, distributed in Abu Dhabi and Dubai.
Young people residing in Abu Dhabi can participate in the training sessions organized in Zayed Sports City, Activate on Al Maryah Island, and the Emirates Palace Hotel in Abu Dhabi. In Dubai, training sessions are organized at the Jumeirah Baccalaureate School, in addition to Guildford Dubai School and The Sevens Stadium.
The City Football Schools training program is based on the football philosophy of the Manchester City Academy, and the schools open their doors to boys and girls from 3 to 18 years old, providing them with the opportunity to develop and refine their footballing talents, support their physical fitness and general health, and enable them to meet new friends in a fun educational environment. Entertaining, supervised by expert trainers.
Simon Hewitt, Senior Director of Football Operations in the Middle East for City Football Schools in the Middle East and North Africa, said: “We are excited about the start of the new training season, and we have been keen to put safety measures in place at the site that organizes training sessions in Abu Dhabi and Dubai, and we hope to follow young players from around the world. country, and they practice their favorite sport.
He added: The program provides players with the opportunity to train under the supervision of the expert coaches of the City Football Group, who come from Manchester City and Melbourne City, and are accredited by the European Union. Football enthusiasts to join us in the Manchester City family, to enjoy this sport in a safe atmosphere, and to make new friends.
In 2020, City Football Schools celebrated the 10th anniversary of the launch of its football programs in the UAE, while the team’s front row players, including Phil Foden and Bernardo Silva, highlighted the importance of training sessions for young players in various parts of the country, and the program witnessed Since its launch, more than 30,000 training sessions have been organized, in which young players of all ages have participated.

Tourism Forecast: In Finland, tourism consumption will still be as high as 40 per cent of the pre-pandemic figures this year