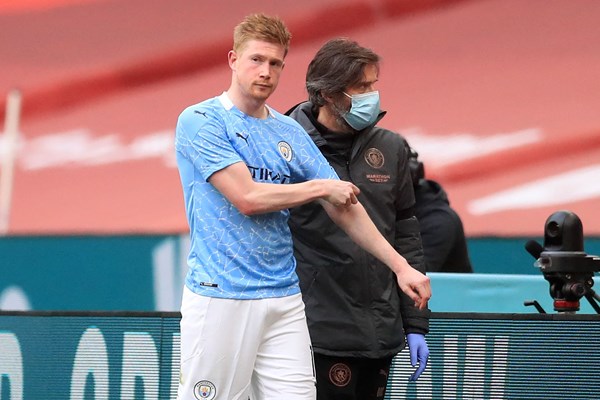 Manchester City said that he did not know the “seriousness” of the injury suffered by Belgian star Kevin De Bruyne, but he will definitely miss the Premier League match on Wednesday against Aston Villa.

De Bruyne suffered the injury in the second half of Saturday’s match, which City lost to Chelsea 0-1 in the FA Cup semi-final, which put an end to his dream of scoring a historic quadruple this season.

The injury of the 29-year-old Belgian star comes at a sensitive period of the season for City, who on Wednesday will seek to move away again at the top of the Premier League, 11 points behind his arch-rival Manchester United, and then to win the League Cup on Saturday, when they meet Tottenham at the stadium « Wembley ». The most important test for Spanish coach Josep Guardiola’s men remains on April 28, when he plays the Champions League semi-final first leg against Paris Saint-Germain.

“Manchester City can confirm that De Bruyne sustained an injury to his right foot and ankle in the FA Cup semi-final against Chelsea,” City said in a statement on Monday. We don’t yet know the extent of the problem. We will continue to review Kevin’s position, but he will miss the Premier League match on Wednesday at Aston Villa. He concluded: We will provide you with any developments in a timely manner. De Bruyne, who scored 8 goals in 32 matches this season, imposed himself one of the main pillars of City since he came to him in 2015 from Wolfsburg, Germany, and since his arrival in 2015 he has won seven major titles with the “Citizen” shirt.

De Bruyne signed, earlier this month, a new contract that will keep him at City until 2025. The Spanish coach for Belgium, Roberto Martinez, will be looking forward to De Bruyne’s situation, because he depends on him a lot next summer in the European Cup finals that was postponed from last summer due to the Corona virus.

Pablo Laso: "Larkin is the most explosive player in the Euroleague"