Cinthia Fernández accused Patricia Bullrich of being ‘childish’ and the head of the Pro replied: ‘In which country do you live? 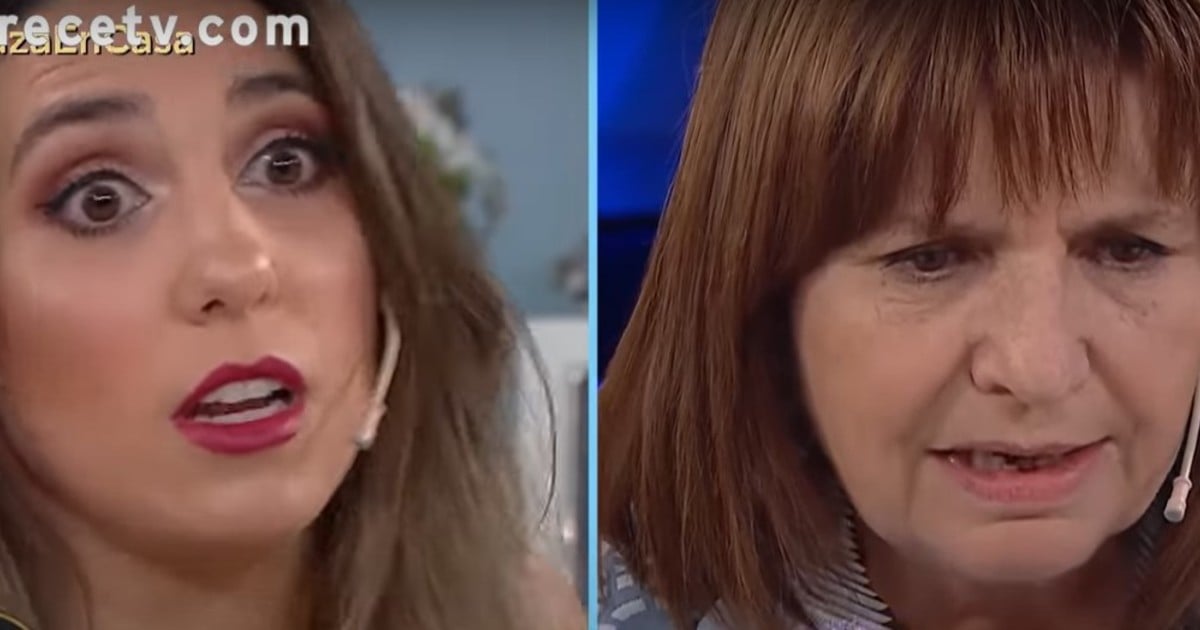 Cinthia Fernández and Patricia Bullrich maintained a strong crossing on the table of Mirtha’s night, the program that Juana Viale conducts for El Trece, when discussing the complaint that Florencia Peña presented against the deputies of Together for Change Fernando Iglesias and Waldo Wolff.

In a heated debate, the candidate for national deputy described as “childish” to the former Minister of Security for her position on the case while the former legislator defended Iglesias and retaliated against the actress saying: “I don’t know what country you live in”.

The debate started when Juana Viale asked Bullrich “about the complaint that Flor Peña made to Iglesias and Wolff for media, institutional and symbolic gender violence.” “What we Argentines feel is this double standard“of the Government, the former minister began to immediately charge against President Alberto Fernández for “self-justify” for the income to the Quinta de Olivos, when it was in a strict quarantine.

“It is the impunity of power,” added Bullrich when she was interrupted by Cintia Fernández, who pointed out that she was asking about women and accused her of being “mixing” things. “It seems to me that the mistake we make is to mix the two themes: one is the misogyny, that both sides have it and the woman remains in the middle; and the other is the lack of respect because we all had to be inside and they have to preach the example “, said the candidate to reproach the former official that”did not issue opinion on what they did “Iglesias and Wolff.

“I am not issuing an opinion for a deeply conceptual problem. In Argentina we have been living, for a long time, an attempt to construct a single truth, which is what Kirchnerism expresses, and anyone who thinks differently is always attacked and taken out of context, they are told anything. What i believe is that language is part of democracy”Bullrich explained.

Cinthia Fernández interrupted again and told him that “abuse is not part of democracy”. “You allow me, democracy has a coexistence contract and, when that contract is broken, they can tell you that you are equal to the dictatorship, murderer or whatever. That logic of breaking that contract makes those who are part of the Government cover up any act carried out by a person on his side, “reflected Bullrich, who considered that it should” rebuild a democratic arena “, in which those who commit an illegal act,” those of his party should be able to condemn it. ” it means that they are never criticized. I want them to criticize, when they are capable of criticizing themselves, of asking for forgiveness and not always of accusing the other, “he added.

It was at this time that Cinthia Fernández told her that “the explanation is childish”. “For a democracy, we need the other not to perceive you as a cockroach or as someone who has no voice or vote, and that is the deep meaning that Kirchnerism has put to language in Argentina,” continued the former minister almost without hear.

The panelist from Los Angeles de la Mañana told him: “We are not talking about ideology here, or whether it is from one side or the other.” “You don’t talk about ideology because … I don’t know what country you live in, “returned Bullrich.” I see you and it seems childish to me, “Cinthia Fernández answered immediately to add that” mistreating a woman, on one side or the other, does not matter. they mistreated. “

“There are two things that must be separated, which I think they are trying to cover. One thing is the income (to the Quinta de Olivos), which is not due; while outside they were melting, they do not lead by example. Now, as a woman I tell you, you can’t bank and say ‘I do not criticize mine because others do not’, in the middle is the woman “, argued the candidate.” I do not bank “, Bullrich tried to interrupt while the panelist asked him to listen to her not to do of the conversation a “monologue”.

Juana Viale mediated the situation and recalled that Kirchnerism has also attacked Bullrich. “They never asked me for forgiveness”added the former minister to which Cintia Fernández told them: “You cannot act like them.” “I don’t act like them. I want Argentina to understand that a group like ours, like Together for Change, when attacked is because of who we are and what we think, “he replied.

Cintia Fernández complained again because the former minister was not talking about the woman but about the struggle between the ruling party and the opposition. “I feel like I’m talking to my daughter, who says ‘I’m misbehaving …'”. “Don’t treat me like your daughterPlease, “Bullrich cut her off, with a certain irony.” I put it down to simple words, because you politicians complicate everything, “replied the actress, to which Bullrich pointed out that she also entered politics. “Do not ignore me or chicanee me. I’m telling you that, as a woman, I couldn’t endorse it just because on the other side they don’t criticize themselves. Others do things wrong, but as a woman she cannot respond like that. For me, it is childish ”, insisted the panelist.

The representative of the Pro replied that “Kirchnerism is a model that denies reality” but “if Florencia Peña gets a tweet that could be a freedom of expression, they say everything “.

“Freedom of expression has a limit, when it is disrespected, yes,” Fernández jumped, while Bullrich repeated his claim that Kirchnerism also criticize their actions.

“This is not how we move forward,” said the actress, almost resigned, while the former minister asserted: “We are not going to be the ones who generate the idea that our discourse is self-folding of what Kirchnerism invents as a story. I will not accept the Kirchner story”.

Juana Viale tried to close the discussion by pointing out that the complaint fell on Florencia Peña and “not on the other participants who went to Quinta de Olivos” during the quarantine.