Cifuentes blames the university for the falsification of the minutes of its work: “I acted in good faith” 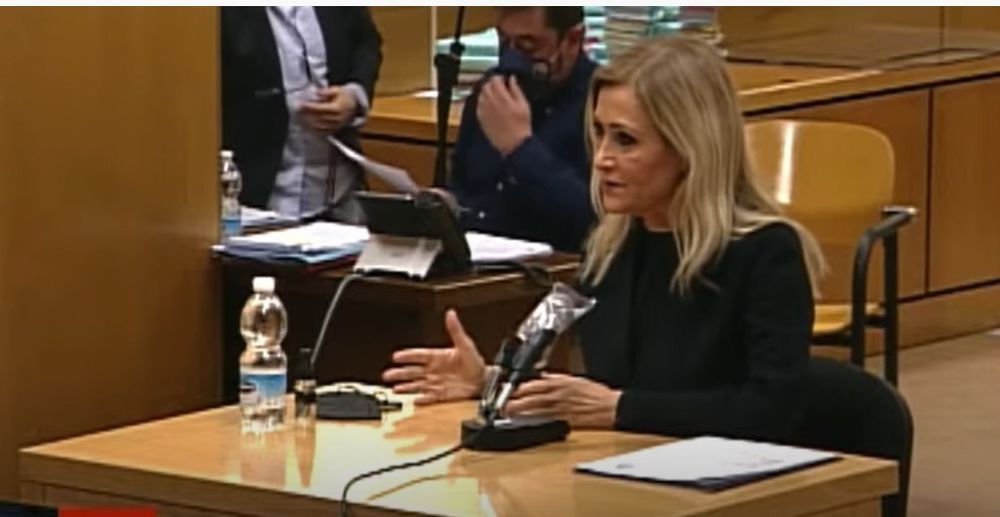 Cristina Cifuentes, former president of the Community of Madrid, has already put her main defense strategy on the table in the trial of the master’s case. During her statement as a defendant in the second session of the oral hearing, which is held this Friday, the former leader of the PP has held the Rey Juan Carlos University (URJC) responsible for the falsification of the certificate of the final master’s work (TFM) that the sits on the bench and for what the Prosecutor’s Office asks him for three years and three months in jail. As he has assured, he never asked the educational center to send him the document that, just a few hours after the scandal broke out, he exhibited before the media and on social networks to try to avoid it. Politics has repeated that the university took the initiative to send it to him and that, for this reason, she gave it credibility: “I think I acted in good faith.”

The former president asserts that her role during the crisis, which began on March 21, 2018 when eldiario.es published the first information, he limited himself to asking his team to speak to the university and collect “all the supporting documents that he had completed the master’s degree.” “I asked them to send me the title or a copy, a copy of the registration and the payment of the registration fee, and I also asked for a personal academic certification where the 12 subjects and the TFM would be recorded.” “But they send me another paper that I don’t ask for, which is the minutes. I was unaware that the TFM had a record. But the university sends it to me through the rector’s secretary. Which gives me a guarantee ”, he added.

“But why did you show the minutes that day?” —The prosecutor insisted, referring to the great value that Cifuentes gave to this role by defending himself from the scandal in front of the media, on social networks and in the Madrid Assembly.

– Because it is a documentation that the university sends with the other. I, at no time, could I consider that there was a forged signature. If I had known, I would not have sent it to the journalists. I think I acted in good faith. […] The good faith was presumed to the university.

“Did you give instructions to the material author of the forgery?” – His lawyer asked him later

“Not her or anyone else.”

With these words, the former president tries to avoid the cause that surrounds her in a view where contradictions have not been slow to emerge. When it was barely half an hour before this second session of the trial, Cifuentes has denied that he defended his TFM in court on July 2, 2012, a date that appears in the falsified record, despite the fact that when the case broke out, he said just the opposite. Now, his version has changed: “Really, I did not defend the work. I turned in the work and explained the general lines ”, he answered questions from the prosecutor:“ I was surprised because it was a very informal act. In fact, to the people to whom I gave the work, I also do not know if it was the court that later evaluated it. I suppose they were university or master’s professors, but I didn’t know them ”.

The former president has not identified the teachers to whom she gave her work – the three teachers that appear in the minutes deny that this court was formed – and she has not been able to say how many there were. “I don’t remember if it was two or three people. This did not happen in a classroom, but in an office and did not last long. I did not read the work. I gave them the work and explained the general lines, what it consisted of, but much more than that ”.

A week of setbacks

Cifuentes has landed this Friday at the Provincial Court of Madrid after receiving two hard setbacks this week. In the first place, last Monday, during the first day of the trial, Professor Cecilia Rosado, also a defendant in the case, confessed before the court that she had falsified the TFM minutes after receiving pressure from her hierarchical superior, the late professor Enrique Álvarez Count, and an adviser to the regional government, María Teresa Feito, who also sits on the bench. On the other hand, this Thursday it became known that a Madrid court had filed the complaint that Cifuentes presented against the two journalists from eldiario.es that they uncovered the master’s case.

And, in addition, the interrogation this Monday has made it possible to verify how Cifuentes, according to her own account, obtained the degree under very special conditions. He did not go to class, nor did he have any relationship with any of the teachers who taught the different subjects. For this, he blames Álvarez Conde, “brain” of the plot, according to the investigating judge. “When they tell me about the master’s degree, I already explained that I cannot attend class due to my obligations as a member of parliament in the Assembly. They tell me that there is no problem, that other students are in the same situation and that attendance at class and exams can be supplemented with the presentation of work ”.

“Who transfers these facilities to you?” The prosecutor asked.

How did you make these jobs reach the different teachers? Because they were the ones who gave him the grade.

—I sent them to [Álvarez Conde] through a family member or someone on my team, who approached them [en papel]. I guess he passed them on to the various teachers.

“Was he doing them on a computer or were they handwritten?”

—After thinking for a long time, I think I remember that I used a laptop that belonged to my daughter, then I printed them on paper (they were not very long jobs either) and sent them.

“You don’t keep a copy of any?” Because none have been contributed to the procedure.

-No. They were paperwork. I probably destroyed those papers once I got the grades or sent them in, because I had no interest in keeping them.

At the end of Cifuentes’s statement, which has lasted for almost two hours, the turn of the witnesses began. The first to parade through the room was Clara Souto, another of the teachers of the master’s degree who appears as a component of the supposed court that qualified politics, along with the teachers Cecilia Rosado and Alicia López de los Mozos. Souto has said that he was never part of that supposed evaluation, nor was he in any meeting with the leader of the PP where he delivered the TFM. In addition, he added that Álvarez Conde even told him that he received pressure from the university and the “political sphere” during the scandal, although he did not specify names. Rosado did tell him that he had suffered them from the advisor Feito.

The third teacher who supposedly signed the certificate, Alicia López de los Mozos, has also acknowledged that she was never part of that court and that her signature was forged. “I am not going to support that lie,” he said during his testimony as a witness.

Flick confirms: Goretzka and Martinez not in the final of the Club World Cup!