Chinese tanks appear on the beach, while Pelosi would be traveling to Taiwan 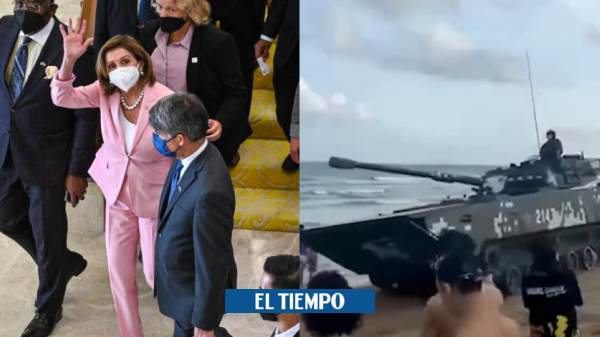 Following China’s warning to the United States about the possible visit of the Speaker of the US House of Representatives, Nancy Pelosi, to Taiwan, Several videos have gone viral in which Chinese tanks can be seen arriving in the province.

The United States will bear the responsibility and pay the price for undermining China’s sovereignty and security.

On July 28, the Chinese Ministry of Defense promised that the army would not sit still before the official’s visit. This Tuesday, August 8, China again alerted the United States.

The Asian country said the US government will bear the “responsibility” and “pay the price” if Pelosi ever sets foot on Taiwanese soil.

“The United States will bear the responsibility and pay the price for undermining China’s sovereignty and security,” a spokeswoman for the Chinese Foreign Ministry, Hua Chunying, told reporters.

(Read on: Taiwan Responds to China’s Warning: ‘Adequate Troops Will Be Deployed.’)

However, and despite the threats, several local media outlets have stated that the arrival of the leader is very likely.

Even the Taiwanese newspaper ‘Liberty Times’ cited unidentified sources, according to which, Pelosi would arrive on the island on Tuesday night and that she would meet with President Tsai Ing-wen the next day.

The possible visit alerted the Chinese government, which carried out a military deployment with “live ammunition”. In fact, rFujian residents shared videos of several tanks reaching the beaches while the official would be traveling.

According to the media ‘Sputnik’, in the images it is possible to see “DF-16 medium-range ballistic missile launchers of the Chinese People’s Liberation Army Missile Force”.

(Also read: Nancy Pelosi begins her tour in Asia amid tensions over Taiwan).

In mounting tension, the military has also launched a military exercise in the South China Sea and Beijing has demanded that Washington cancel the visit.

Despite tensions, the US and China open the door to a meeting between Biden and Xi

Iran says it can replicate the atomic bomb, but doesn’t want to