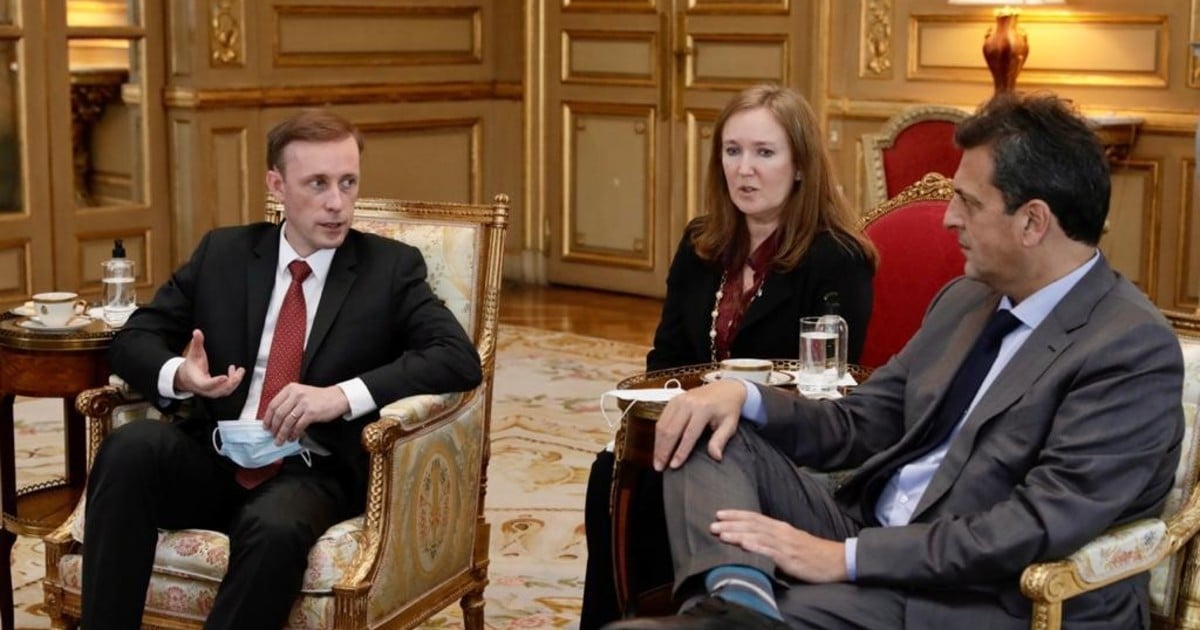 If something leaves the path of the National Security Advisor Jake sullivan for Argentina, is that the Joe Biden administration wants to keep this country in line with allies with whom you may or may not agree on regional and international issues, but you know that the tilt to the left Hard Kirchnerism is not the same as the one that reviles: Cuba, Venezuela and Nicaragua.

But also, because today Biden has a somewhat different agenda at least in ways to that of the Donald Trump era and in it finds in Argentina an ally with nuances: concerns about the Chinese and Russian advance, the deterioration of the environment. The fight against the climate was rejected by the republican. And on that train the relationship between Biden and Alberto Fernández finds in the president of the Chamber of Deputies, Sergio Massa It is one of the great lines of union between Argentina and the United States, also for Biden.

Massa held a 40-minute meeting with Sullivan and his team late Friday afternoon. It was precisely in it who wove this new stretch of meetings between the government of Alberto Fernández and Biden: Juan Gonzalez, advisor for the region of the Security Council, and who came to Argentina in April and later received the Tigrense in Washington. This Colombian-American got off the plane that brought the visitors dressed in a Tigre T-shirt.

The Speaker of the House of Deputies, Sergio Massa, with the White House National Security Advisor, Jake Sullivan

A handful of topics were addressed in that meeting, which took place in one of the rooms of the American residence on Avenida del Libertador. One of them is of central importance to Americans has to do with Washington’s campaign to Dismantle the advancement of Chinese 5G technology, who embodies the giant Huawei, which for the United States is a private state consortium.

Now, just as they did in Brazil -which is much more advanced on the issue and to be put out to tender at the end of the year- the Americans offer aid so that Argentina source from your own development and don’t depend on China. The talk here is just beginning and would depend on credits from US agencies and organizations. By the way, Alberto F.’s relationship with China is not as intense as it is believed. Beijing would have already shown its disgust for the agreements it hoped to sign with the Argentine government and they are still “sleeping.”

With regard to the issue of combating the deterioration of the environment, there are a sensitive issue in the relationship between the United States and Argentina for Brazil. Massa agreed with Sullivan to bring to the P20, which is the G20 of House Presidents in Rome, the issue of caring for the climate as part of the environmental legislation to be adopted by the countries of the Group of 20, which are made up of powers and developing countries.

And also in the meeting on Friday, they raised the possibility of making a joint work with Argentina and Brazil on the basis of the impact study of land clearings, impact on rainfall and water courses, understanding water as a strategic resource and Paraná in its historical downspout as a symptom of this.

Sullivan spoke about the lung logic of the planet with the governors of the Amazon because they saw interest more from the States than from the federal government of Jair Bolsonaro. But all this is a sensitive issue because a sector of Brazilian diplomacy would already be showing its They are suspicious of the fact that Argentina speaks, opines and does for them in matters that they consider internal.

In fact, there is an unconfirmed version that after so many clashes between Bolsonaro with the United States and Europe for the preservation of the Amazon, the neighboring president would not yet be invited – or at least would not have any role – at the Climate Summit that Argentina is organizing with Washington for the end of September in Buenos Aires. It will be virtual and face-to-face but the United States special envoy for the climate is invited to Buenos Aires, John Kerry.

In that train of mutual tunes, the Americans raised Argentina the future of illegal fishing in the South Atlantic, where China also plays strong: the fleet of Asian ships is also private-state.

The US Coast Guard sought to do joint exercises with Argentina and the Government rejected it. The Americans did the same but with Brazilians and Uruguayans. And although they did not go down beyond the Rio de la Plata, an American submarine assisted by British planes appeared in international waters off Argentina in the summer of this year.

The leader of the Frente Renovador has not hidden his differences with a sector of hard Kirchnerism when sentence that Venezuela is a dictatorship. But as the entire government staff assured his team yesterday that Sullivan did not come to Argentina to demand pressure against Cubans, Venezuelans or Nicaraguans. In this regard, the Government refuses to accompany the United States. Here they assure that Biden understands and that the change in those countries will take time.

Massa, the ambassador Jorge Argüello, The chancellor Felipe Solá and the secretary of Strategic Affairs, Gustavo BelizThey are the ones who truly carry the link with the United States. Today the zigzagging relationship between the Frente de Todos and the United States depends on them. But it also depends on others that Alberto Fernández travel to see Biden in Washington, and that the Democrat gives a strong signal of support for Argentina in the debt negotiations.