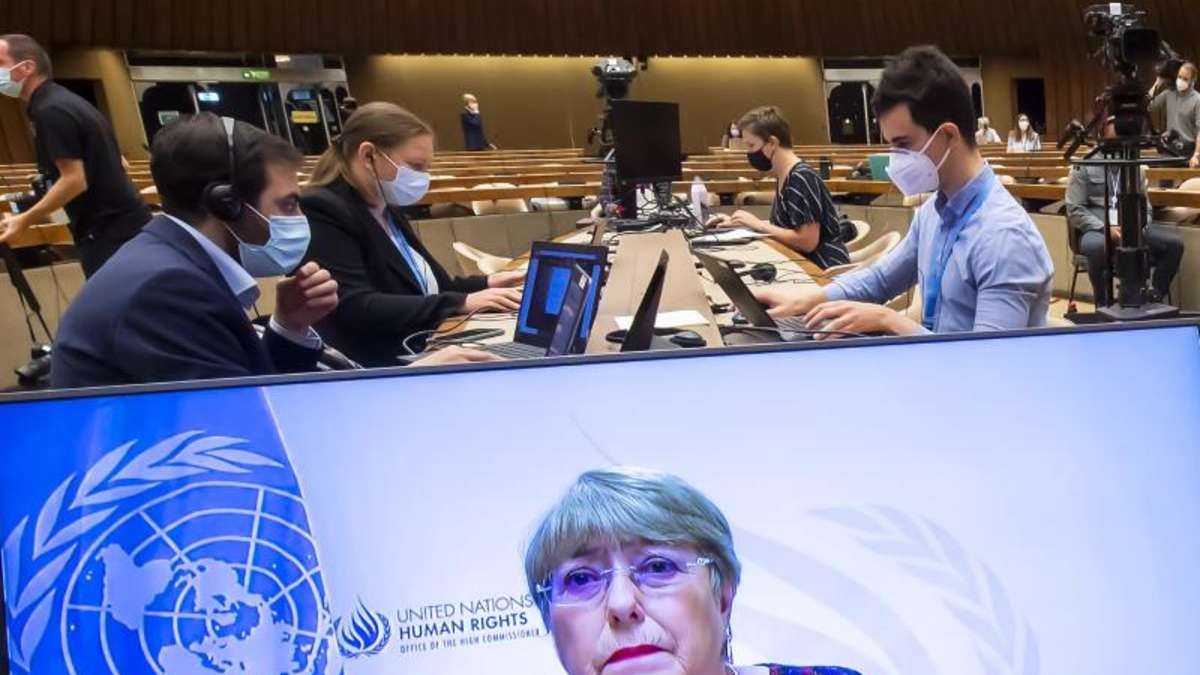 More than 40 countries have asked China to allow independent international observers to enter the Xinjiang region, where the Uighur Muslim minority live.

Geneva – The pressure on China is growing: In a joint declaration, more than 40 states expressed themselves “seriously concerned” about Beijing’s actions in the Xinjiang region, in Hong Kong and in Tibet – including Germany.

The Chinese government must grant UN Commissioner for Human Rights Michelle Bachelet and other independent observers “immediate, full and unhindered access” to Xinjiang, according to the letter read by Canadian Ambassador Leslie Norton at the 47th session of the UN Human Rights Council on Tuesday.

The signatory states include Germany, Australia, Great Britain, Italy, France, Japan and the USA. “Credible reports suggest that more than a million people have been arbitrarily detained in Xinjiang and that there is widespread surveillance that disproportionately targets Uyghurs and members of other minorities and restricts fundamental freedoms and Uyghur culture,” it said Explanation. Beijing must end the “arbitrary detention” of Uyghurs and other Muslim minorities.

The human rights organization Amnesty International called for concrete measures to follow the declaration. An “independent, international investigation into the crimes against humanity in the Uighur Autonomous Region of Xinjiang” is needed.

Beijing denies the allegations. For his part, shortly before Norton, the Chinese ambassador read a statement on behalf of a group of states that expressed “deep concern about serious human rights violations against Canada’s indigenous people”.

“Historically, Canada has robbed and killed the indigenous people of its land and exterminated their culture,” said the Chinese paper. An alliance of supporters emerged: They include Belarus, Iran, North Korea, Russia, Syria and Venezuela.

With reference to the discovery of 215 unmarked graves in a former boarding school in Western Canada, the group of states around China called for a “thorough and impartial investigation of all cases in which crimes have been committed against the indigenous population, especially against children”. Indigenous peoples had been re-educated in schools like this in Canada.

The Ambassador of Belarus read out another joint statement on behalf of 64 countries, in which he stressed that Hong Kong, Xinjiang and Tibet were China’s internal affairs. Belarus itself recently had to accept sanctions from several influential states. The EU, the US, Canada and the UK had expressed concern about the “ongoing attacks by the Lukashenko regime on human rights, fundamental freedoms and international law”. The EU states had previously decided to ban aircraft from Belarus.

At the start of the multi-day meeting, Bachelet warned on Monday of a massive deterioration in the human rights situation. Specifically, she referred, among other things, to the situation in China, Russia and Ethiopia. The USA had also recently tightened the course in its China policy. The session of the UN Human Rights Council lasts until July 13th. Because of the corona pandemic, it is largely taking place virtually (AFP / fn)