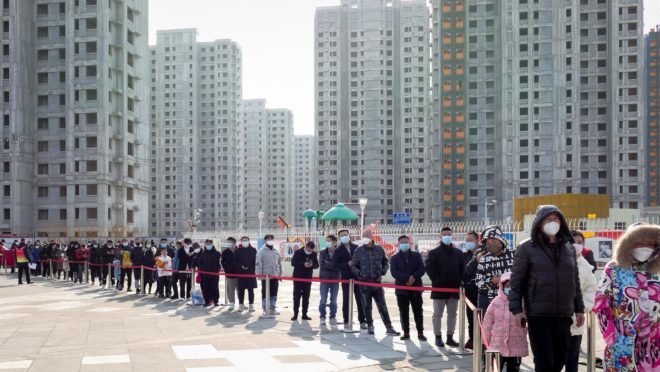 China imposed a lockdown on the city of Anyang, of 5.5 million people, on Tuesday after an outbreak of Covid-19. This is the third Chinese city to adopt the measure since December, bringing the number of Chinese currently confined to around 20 million.

The cities of Xi’an, with a population of 13 million, and Yuzhou, with 1.1 million, are also under lockdown. In addition, restrictions have been imposed on the city of Tianjin, which is 150 kilometers from Beijing, which will host the Winter Olympics from 4 February.

Anyang authorities announced the measure late on Monday, ordering people to stay at home and banning private vehicles, according to information from the state-run Xinhua news agency.

A mass testing campaign is underway and all non-essential establishments have been closed, “to respond to the serious epidemic control situation and prevent the spread of the outbreak of the omicron variant of the virus”, the state agency said.

According to Chinese regime media, 58 cases of Covid-19 were reported on Tuesday in Anyang, Henan province, and it was not detailed how many of these were caused by the omicron. The total number of infections in the city has risen to 84 since Saturday.

In Tianjin, residents are banned from leaving the city without permission from the authorities, who have also ordered mass testing in the municipality of 14 million people.

In Xi’an, the lockdown has complicated the lives of residents, who report difficulties in buying basic necessities.

The National Health Commission said on Tuesday that 110 local coronavirus infections have been reported across mainland China. Of these local cases, 87 were reported in Henan Province, 13 in Shaanxi and 10 in Tianjin. Another 82 imported cases were reported in 11 regions, according to Chinese authorities.

China has officially recorded 4,636 deaths from Covid-19 since the beginning of the pandemic, only two of them in 2021. However, experts estimate that the country’s data is highly underestimated.

Elvis Costello no longer plays hit because of racist text

Vaccines, third dose to 45% of Italians

Tim hooks up with Vivo-Claro on Oi. Doubts of some advisors on Labriola Ceo