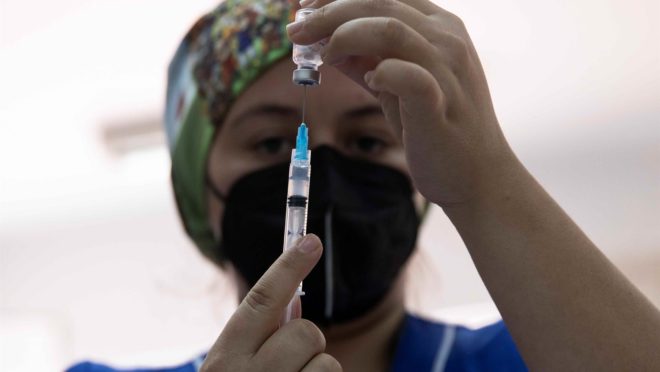 Archive photo of a nurse preparing a dose of the Chinese laboratory Sinovac vaccine against COVID-19 at a vaccination center in Santiago, Chile.| Photo: Alberto Valdés/Agência EFE/Gazeta do Povo

Chile will extend for 90 days, until September 30, the constitutional state of emergency of disaster due to public calamity currently in force as a restrictive framework to combat the Covid-19 pandemic, which has so far left 1.52 million cases of infection and 31,797 deaths in the country.

On Thursday, the Senate and the Chamber of Deputies approved the request that had been made by President Sebastián Piñera, mainly due to the new strains of the coronavirus and the risk of a new wave of infections in winter.

Today, the presence in Chilean territory of the first case of the delta variant was confirmed, in a 43-year-old woman who returned from the United States.

The president’s proposal to extend the state of catastrophe and thus be able to maintain restrictions on circulation, quarantine and curfews went ahead in Congress, despite not having won the unanimous support of lawmakers from the ruling bloc. Some of them rejected the measure arguing that more openness is needed, at least for those vaccinated and for companies, and that the curfew should be lifted.

The declaration of a state of catastrophe due to public calamity is the responsibility of the country’s president, but as the measure has been in effect for more than a year since its first enactment, it requires congressional approval by a simple majority.

The initiative was initially adopted on March 18, 2020 for a period of 90 days, just two weeks after confirmation of the first coronavirus infection in the country.

Since then, and counting this Thursday, the catastrophe status has been extended five times, always for the same period of time, as a measure under which other restrictions apply to prevent the circulation of the SARS-CoV-2 virus.

With 3,448 infected and 51 deaths detected in the last 24 hours, the country appears to be emerging from a second wave that has put the hospital system under pressure. In addition, it forced border closures and a quarantine throughout the capital.

All this in the context of a successful vaccination process that has already immunized 50% of the population with two doses of vaccines and another 13% who received the first dose.

GTA Online confirms exclusive news for PS5 and Xbox Series: you can tune some vehicles