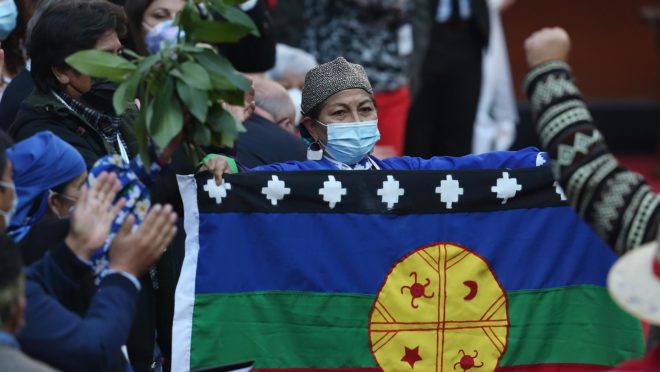 0
SHARES
0
VIEWS
Share on FacebookShare on Twitter
Elisa Loncón, Mapuche constituent, is elected president of the Constitutional Convention of Chile during an inaugural session at the former National Congress, in Santiago, July 4| Photo: EFE/Elvis González

The 155 lawmakers who will draft Chile’s new Constitution on Sunday elected academic Elisa Loncón, an indigenous woman, to preside over the body that will create the new fundamental law, which will replace the current one, inherited from the dictatorship of Augusto Pinochet. The election took place during the inaugural session of the Constitutional Convention, which began drafting the new Chilean Constitution this Sunday, July 4th.

Elisa Loncón, 58, a Mapuche academic, linguist and activist – the majority indigenous ethnic group in Chile – was elected in the second round of 96 out of 155 votes, at the inaugural session of the convention held at the capital’s former National Congress, an event that was almost interrupted by one hour due to a protest by a group of constituencies. “I want to thank all the Chilean people for having voted for a Mapuche person and woman to change the history of this country,” celebrated Elisa after her election, in the Mapudungun language and then in Spanish.

Although the role and attributions that the president will have have not yet been defined, specialists point to the election of Elisa Loncón as a symbolic and historic act, a tribute to feminism and indigenous peoples, and it is expected that she will act as a spokesperson and moderator of the debate.

Elisa Loncón occupies one of the 17 seats reserved for indigenous people at the convention, seven of which were for the Mapuche people, two for the Aymaras and one representative of each of the others: Kawesqar, Rapanui, Yagan, Quechua, Atacameño, Diaguita, Colla and Chango .