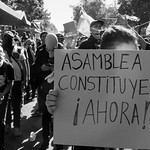 The Constituent Assembly of Chile will begin this Sunday (4.Jul.2021) and the drafting of the new Charter will be presided over by the indigenous intellectual of Mapuche origin, Elisa Loncón. The Assembly takes place after voting in favor of the end of Pinochet’s Constitution on October 25, 2020. It will be the 1st since the end of Pinochet’s regime.

The Assembly is composed of 78 men and 77 women, the 1st being a mixed Constituent Assembly, and 17 of them are from native peoples. Meetings can last up to 1 year (9 months extendable for another 3).

The ceremony had 2 indigenous rituals. The 1st will be performed by Francisca Linconao, a legislator known for her spiritual authority over the Mapuche people, and the 2nd will be performed by Isabella Mamani, a representative chosen by the Aymara people. Every moment should bring prayers in native languages.

This Saturday (3.jul), the secretary general of the presidency, Juan José Ossa affirmed that the country is prepared for this beginning.“We want to convey to the country that we have done things well, that we are always available to improve them and that the members of the convention can feel confident that the government respects their degrees of autonomy, but also takes care of all technical and financial aspects and support for its administrative disposition that the law asks us to hand over to the members of the Convention.”, said Ossa.

The constituents arrived throughout the week in Santiago, Chile, and were tested and accredited. The event counts on simultaneous translation to the constituents of native peoples.