Children “The whole family at home gets nervous” – Kevadpörriäinen was historically missed last year, but now it appears more special than ever 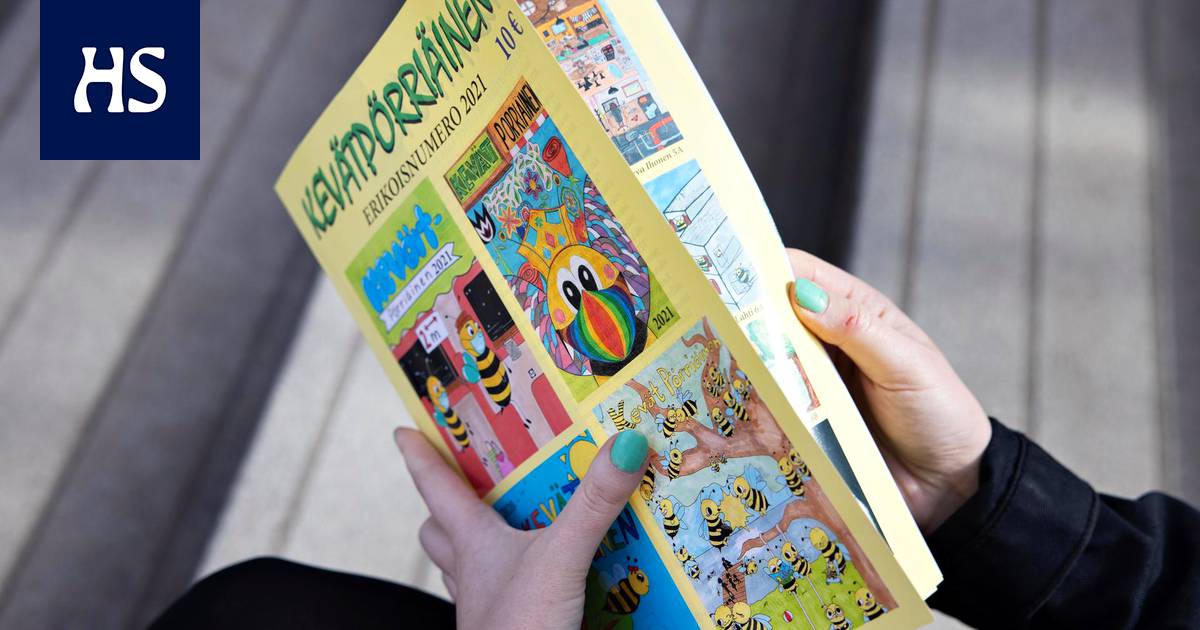 The pandemic put sticks in the strollers of Kevadpörriäinen made by Helsinki’s primary school students last year, and the magazine did not appear at all.

Year 2020 was a real exceptional year, which also affected the distribution of the traditional spring importer Kevadpörriäinen.

Last year, the schoolchildren’s magazine failed to do so for the first time since its inception. This year, the editor decided whether it was Korona or not, the magazine needs to get it done.

“This year, it was decided not to submit to this job. Pörri has been published non-stop in 1949, and I think it belongs to spring, ”says the recently retired person who edited the magazine’s editor-in-chief. Liisa Vasamies.

The magazine, which sees its light of day on Thursday, is almost a double issue. Special issue 2021 combines not only new but also reports that did not appear last year. In all, there are almost a hundred pages of readings from schoolchildren.

Head is dedicated to schoolchildren’s reports of exceptional times of the exception year from quarantine to distance school and video calls to grandma.

“It’s amazing how all my family members have remained sane. My family and I were quarantined in December and since we didn’t meet anyone, going home was sometimes amazing. “It was nice when we played Among Us, but I couldn’t handle that rumba again.” Jenni Bergholm 4C.

“The whole family at home gets nervous. Unless you play or watch a movie. ” Väinö Laine 2A.

In children’s stories, distance school is sometimes nice, but sometimes opening a laptop doesn’t interest anyone. Some have been too noisy at home, others have enjoyed when the family is once a lot together. Board games and video calls are repeated in most exceptional home stories.

“Now the whole family is at home, it’s worth enjoying it too. There are dad meetings remotely, and mom doesn’t have that much work. They play with the siblings and walk a lot outside. ” Emma Kivi 5B.

“Everyone worked. – We also watched the news when we would go to school again. I called a lot of grandparents if it got boring. – “Aitana Tahvainen 4B.

“Mom starts the meeting, the clock shows eight. Soon school starts getting in, so open your laptop covers. “Fortunately, we will be able to sleep soon and tomorrow the whole thing again.” Heart and Luna 5M.

Pandemian therefore, even this year the children do not themselves sell the magazine, as is usually done. The magazine can be ordered through the Internet all over the country.

“The kids have been happy to sell it. In recent years, the magazine has paid five euros, and the seller has received one euro for it, ”says Vasamies.

All proceeds from the magazines, after deducting expenses, go directly to the schools. Clear instructions have been given for the purpose: the proceeds should be used for the joy of children.

“Principals have to give an assurance that the money will not go elsewhere.”

In the early years, according to Vasamies, the money was spent on “round scholarships,” but today, for example, excursions for the whole class are preferred.

Spring porpoise the delivery goes through all the writings, drawings, assignments and jokes sent by the schoolchildren.

Yes, those jokes. They are children’s favorites that are sent to Kevadpörriä by far the most of all content. In one year, there were 1,200 jokes.

“Two people spend one week looking for a bunch of organic jokes.”

Organic jokes are jokes originally invented by children themselves, and according to Vasamies, they are real rarities.

Where can you get the cheapest pasta in Finland? Alepasta. Mikko, Juuso and Emil 5C.

What did the horse say to the other horse when they met? Keep a clear distance! Viola Jyrkynen 5B.

In the double number, these real gems have been assembled into three openings.

The investigation is still going on

Kipchoge takes off for the Olympic marathon in Twente