Child protection When suicide and substance use began, Päivi felt completely alone – Leon’s mother, who was taken into care, tells how everything can go wrong in a “good” family 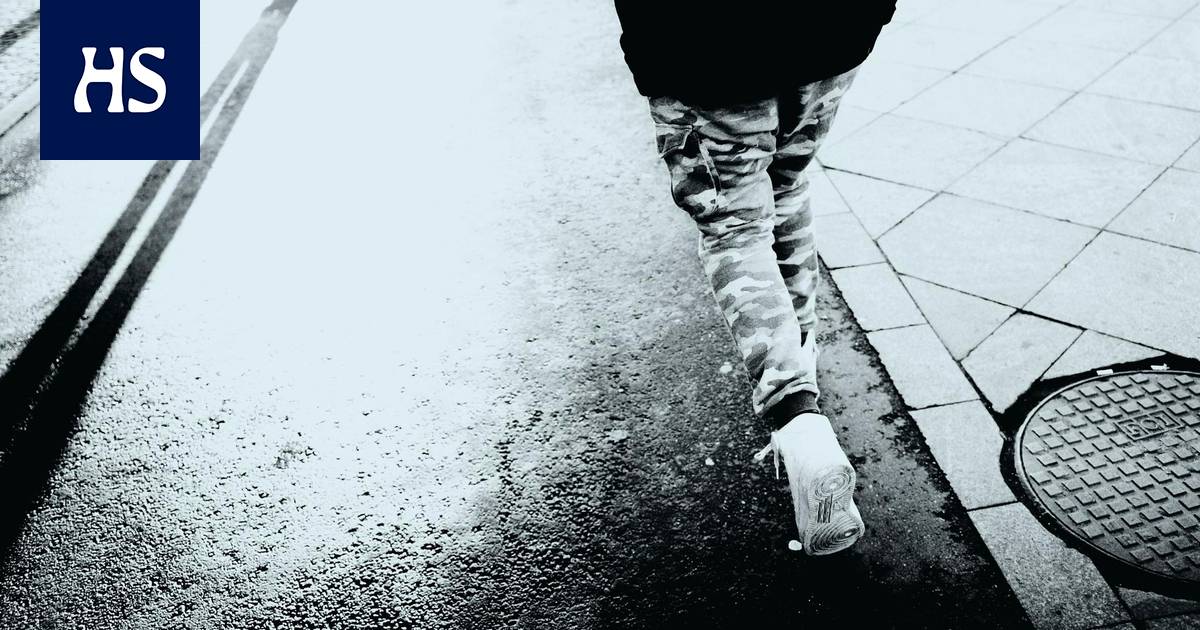 Päivi is an ordinary middle-aged mother from Helsinki, whose son was taken into care after years of problems. According to Päivi, the family was never offered child protection cohabitant help.

When Päivi talks, in the background on a computer screen you can see an ordinary Helsinki home: flowers and a hanger with a school backpack. It’s Daughter of the Days.

The home here is in itself pointless to stare at. Today, the custody of the adult son Leon was not due to home conditions. Päivi is not an alcoholic or an addict, but a working middle-aged mother who, according to her words, has always had good and close distances to both of her children.

Today, however, Päivi is only able to work part-time, as taking care of her own child and all the worries associated with it have eroded her ability to function.

“I agreed to take Leon into care because I thought that in the orphanage, limits could be set on his suicidal behavior and substance use,” Päivi says on screen.

“But it was disappointing. Quite a wild west. ”

Koskelan with the homicide, there has once again been a lot of public talk about the state of child protection, but it is rare for relatives of children in custody to be voiced. It is also often overlooked that foster care is not always due to home conditions, such as parents who use drugs.

Custody can also be based on the child’s own behavior. In those over 12, the cause is often the young person’s own behavioral disorders or a serious substance abuse problem. Custody is still an extreme measure: a parent may be willing to take custody of their own child or apply for it themselves when he or she begins to be confused about worry.

For example, a young person may run away, be away from home for days or weeks, use dangerous drugs and move in unsafe company. As with society, for many parents, custody is the last resort for getting help.

“It is often found when parents have tried in vain to get other support for years,” says a child protection expert at Kasper ry, which focuses on parenting and family counseling. Mirjami Koivunen.

“Especially in the care of young people, it can be seen that psychiatric and substance abuse services do not pull. However, placement outside the home does not replace the support that children with neuropsychiatric symptoms would need. ”

The city of Helsinki has now also tackled this problem, as the city boat at the end of March, create new posts for child psychiatrists and neurologists.

Day tells that Leo was just an ordinary child.

“The only special feature was that sometimes, very rarely, he suddenly seemed to retreat and grow like a wall around him. Leo was not contacted. However, this only happened a few times. ”

The family environment of early childhood was not the most traditional. In the beginning, the father was little involved in his child’s life. When Leo turned two, his father moved abroad. In practice, at the same time, the relationship with one’s own child was severed.

Päivi believes the incident has had an impact on Leon’s later life, even though the symptom didn’t start right away.

“I’ve been the only constant adult Leon’s life.”

Today, it is a huge risk. In his view, one safe adult is not enough for a child.

“Especially when Leon was a small adult, his life was constantly changing. In kindergarten and primary school, teachers changed several times. ”

Department of Health and Welfare according to researches Many changes in the family, growth and living environment are often found in the background of children taken into care. Only one in four children has lived in a nuclear family all their lives, and one in three has experienced parental separation.

The actual ones the problems began when Leon turned five years old.

“He was aggressive in kindergarten. The nurses were concerned and told about it. ”

Päivi talked about the situation to the psychologist at the clinic, but this one did not find any particular “fault” in Leo. For the preschool year, however, Leo received a special support decision.

When the elementary school started, Leo seemed to be better off. According to Päivi, he has never been the ones the school isn’t just interested in. He had a lot of friends and hobbies and had no problems at home.

As primary school approached its end, the situation changed. The teacher repeatedly had to intervene in Leon’s behavior. The boy was restless and seemed to have trouble paying attention. However, attention deficit disorder has never been diagnosed.

“Then I thought to myself that Leo might be depressed. He became a client of Hus’s child psychiatry but was only able to visit there for a year. After turning 13, she was no longer a member of the child psychiatry client group. ”

When Leo moved to middle school, it was decided to put him in a special class. It didn’t go well.

“Leo felt strongly that he didn’t belong there. He did not adapt to the group and did not get along with the teacher. ”

Problems began to pile up. There were vandalism, participation in mass fights and attempted robberies. The circle of friends began to change, and despite the attempts, Päivi no longer knew who the boy was moving with. The gap to Leo began to crack.

“He also used alcohol and felt he couldn’t tell me about it. But I took it very seriously because Leon’s father had an alcohol problem and I also have alcoholism in my family, as well as depression, ”Päivi says.

“Of course, as a parent, I thought my child wasn’t feeling well when he was acting this way.”

“They were of the opinion that we have interactions that work in the family and they don’t really have anything on offer. The idea seemed to be that because we have a good family, we don’t need help, ”says Päivi.

“No support for outpatient child protection was provided but it was said that if Leon’s problems at school persisted, an urgent investment could be an option.”

The purpose of outpatient care is to work with the child and his or her parents or guardians and to identify problems so that there is no need to end up in foster care or foster care, such as an orphanage.

In the process the situation only got worse.

“At the end of secondary school, Leo ran away from home for almost a week, used drugs and behaved self-destructively. Until then, he had complied with the arrival times. I felt it was all a cry for distress, but Leo didn’t give a proper explanation for his behavior. ”

During the escape trip, Päivi says that she was in contact with child welfare and the police. When Leo was found, it was decided to place him urgently. The idea was that he would be stationed for 30 days, allowing his situation to be mapped and a stop to his self-destructive behavior.

It turned out differently: According to the days, Leo escaped constantly during the placement and found a company like him and drugs.

“For the weekends, he was sent home, but instead of coming home, he went his own way, that is, moaned.”

As the situation did not calm down, there was custody ahead. Leo was first placed in a private orphanage in the metropolitan area, but there the use and intoxication of drugs continued. While barking, Leo was also caught in the beating.

Eventually, it was decided to place the 16-year-old boy in a private orphanage for challenging young people far from Helsinki. The boy agreed to the placement, but according to Päivi along the tooth.

“She came home and said, okay mom, take me there. But he wasn’t happy about it. It must have been a really awful experience for Leo to get so far from his friends and familiar circles. ”

Days thoughts of Leon’s second location are ambiguous. The orphanage had strict boundaries and a carefully constructed everyday life. Days thought Leo was starting to be better at the placement: hardening was reduced, as was other symptomatic behavior. But there were also big problems.

“Leo himself said he didn’t feel comfortable there and suffered. There was not enough content in everyday life. ”

According to the days, the place also lacked heat.

“In an orphanage and child protection in general, there should be a similar experience as in the family that there is genuine caring and coexistence. If they are missing, the work will not be effective, even if a hundred people take care of the child’s affairs at the same time. ”

Indeed, Päivi would like to thank the individual child protection workers she has met, who have done their work with heart.

“Child welfare clientele is no easy task. It’s really exhausting. The daily life of the family expands into a network of professionals, and there is a lot of bureaucracy. ”

Leo had time to be in the orphanage for just over a year before he had to move again.

Substitute care is provided only until the age of 18. As Leon approached adulthood, he moved to a so-called independence apartment in Helsinki, where he still lives today.

When a young person taken into care reaches the age of 18, so-called aftercare begins. Its purpose is to support the child’s independence, for example, in finding housing and learning everyday practices. At the beginning of 2020, the age limit for the right of after-care was raised from 21 to 25 years.

Health and the Department of Welfare Specialists Antti Kääriäinen and Marko Mannisen by there are more and more young adults in the aftercare who have diverse and intertwined challenges. The social and economic challenges posed by the corona pandemic exacerbate the problems.

“Korona has been a death for young people.”

When you ask Päivi what Leo now has, the answer is preceded by the silence and reflection you became familiar with during the interview.

“I do not really know. I think he is marginalized, empty. Leo is not studying or hobby with his peers, and bad company is easy to find in the Helsinki metropolitan area. ”

Päivi says there are very difficult issues with custody.

“How to keep a child in the family when he or she is not present in everyday life? How can you convince him that he has not been abandoned and loved? With us, the daily life of the family calmed down with the care, but at the same time the family is scattered and the connection with the child was broken. ”

Days and Leon’s names have been changed.

They separated Rocío Oliva from C5N