Census of homeless people: one in three was left homeless during the pandemic 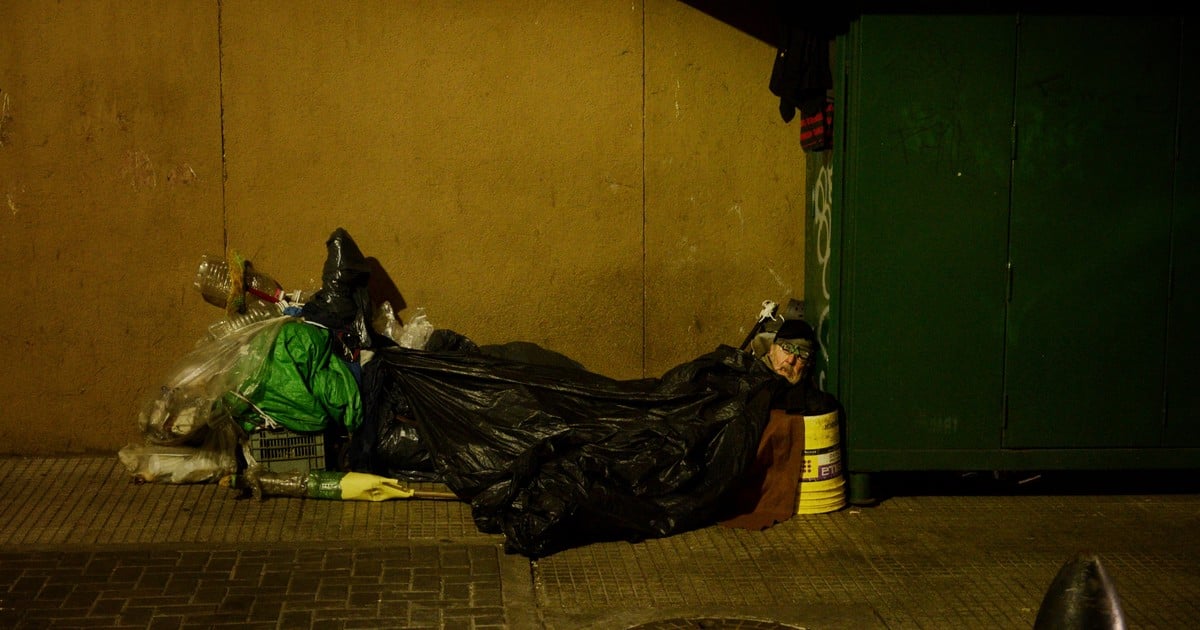 40% of people on the street in the City they have been living in the same conditions for more than 3 years. And 33% for less than a year. The coronavirus pandemic impacted on this vulnerable population, which was also forced to move through the neighborhoods.

In the Commune 1 (made up of the neighborhoods of Retiro, Puerto Madero, San Nicolás, Monserrat, San Telmo and Constitución, all from the Central Area), the number of people sleeping on the streets down 31% compared to the 2019 census. The closure of commercial premises, bars, restaurants and offices expelled them.

These are some of the data that the new census of homeless people carried out by the Ministry of Human Development and Habitat of Buenos Aires, together with the Department of Statistics and Censuses of the City.

In global numbers, they detected 2,573 people with housing deficit: of them, 968 were on the street and the rest (1,605) were spending the night in paradores (they are called Social Inclusion Centers, CIS). It is the first time that the City relieves these people who, certainly, have not resolved their housing condition.

People on the street

On the other hand, the count of who sleep in the paradores It must be done to comply with Law 3,706 on “protection and comprehensive guarantee of the rights of people living on the street and at risk of being on the street”, enacted in 2010.

76% of the surveyed homeless people are men. Photo Marcelo Carroll

In addition, it was identified 98 groups of people with different degrees of kinship, with 174 children and adolescents.

“These numbers give us a photo of the moment that allows us to think ahead and give context to two of the policies that are directly linked to the problem of homeless people. On the one hand, the paradors (CIS), and the reception capacity that we can give from the State: and on the other, evaluate the progress of the cold operation, “he told Clarion María Migliore, Minister of Human Development and Habitat of the City.

According to the Buenos Aires government, there are 2,573 people with a housing deficit in the City, 968 of whom live on the streets. Photo Mmarcelo Carroll

Among the people who agreed to answer the questionnaire prepared by Statistics and Censuses, 18.2% have completed secondary education and 90% spent the night on the street the week prior to the survey, even though it was taken from a hostel.

“Although the entire population was counted on an observational basis, it was only possible to interview and apply the questionnaire to 31.8% of the people surveyed by observation in the street. Both those who were in the CIS and those interviewed on the streets They had documents, “they detailed from the Statistics and Census agency.

Many people who lived on the streets in the downtown area moved to the neighborhoods from the pandemic. Photo Marcelo Carroll

The failure of the census with social organizations

At the end of 2020, the Ministry of Human Development and Habitat began a series of meetings with social organizations to coordinate a joint census, another action required by law. However, no agreements were reached and the Buenos Aires government did the census without the organizations.

Again, the survey was carried out during a single night. The organizations claimed to do it for at least two full days, although for these the ideal is to dedicate four days to it. His argument is that in this way the territory is better covered, since it is a wandering population.

The Buenos Aires government made its census of people living on the streets in a single night. Photo GCBA

From the Buenos Aires government they disagree, because they say that this methodology could cause the same person to be counted twice.

“Social organizations take over from cartoneros, for example; we consider that it does not apply to specific policies related to people living on the streets, because many cartoneros end their activity and return to their homes, many in the Province of Buenos Aires. embargo, the dialogue tables continue and we believe it is necessary to continue deepening the best possible approach to this issue, “said Migliore.

The Buenos Aires government does not relieve the cartoneros who sleep on the street. Photo Marcelo Carroll

The last “Popular Census of People in Street Situation”, carried out in 2019 by social organizations with the collaboration of the Ombudsman’s Office and the Buenos Aires General Auditor, concluded that there was 7,251 homeless people. The survey also included those who spent the night in paradores.

“The numbers of the people registered on the street by the Buenos Aires government are very striking, that’s why we are going to repeat the popular census. Between 2019 and 2021 a pandemic happened, the social and economic crisis is evident, however the City relieved a smaller number of people“, says sociologist Rosario Fassina, coordinator of the Right to the City Program of ACIJ (Civil Association for Equality and Justice.

Fassina warns that this directly impacts public policies. “For example, the Buenos Aires government did not increase the allocation to deal with these problems – he affirms -. The monthly housing subsidy for families is the same as in 2020, $ 19,600. Without real public policies, the problems become a structural situation , as is the case with 40% of this population, who have been sleeping on the street for more than 3 years “.

In the coming weeks, a new popular census will be announced, the one carried out by social organizations.