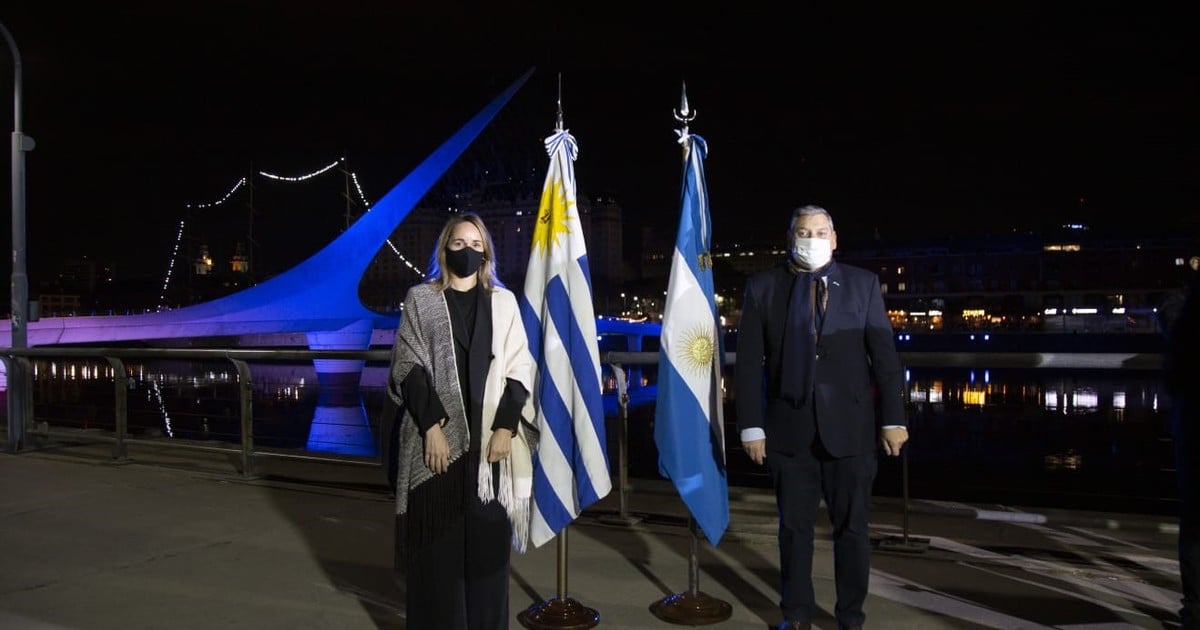 This August 25 is fulfilled 196 years of the independence of Uruguay and Buenos Aires is one of the scenes of the festivities.

The celebrations on this side of the Río de la Plata began this Tuesday night and will extend during this Wednesday with a central act in the Planetarium.

In a clear message of brotherhood, the city illuminated several of central points of azure blue color It barely got dark this Tuesday to kick off the tributes.

The Puente de la Mujer, Floralis Generica, the Planetarium and the Usina del Arte, were illuminated, while this Wednesday, from 19 to 24, the emblematic Buenos Aires Obelisk will also be added to this distinction.

Floralis Generica illuminated in tribute to the independence of Uruguay.

Under the motto Uruguay Celebrates, the Ambassador of Uruguay in Argentina, Carlos Enciso, and the Minister of Public Spaces of the City, Clara Muzzio, were present last night at an emotional event at the Puente de la Mujer.

The event was attended by members of the Neighborhood Orchestra, conducted by maestro Néstor Tedesco, who performed stanzas of the Uruguayan national anthem, La Cumparsita and Adiós Nonino by the Argentine composer Astor piazzolla.

This Wednesday, meanwhile, Carlos Enciso, his vice Pablo Tettamanti and other Argentine Foreign Ministry authorities placed the traditional floral offering at the foot of the monument to General San Martin.

At noon, meanwhile, a wreath will be placed at the base of the monument to José Gervasio Artigas.

The celebration will continue at two in the afternoon, when Enciso will visit with the Buenos Aires Minister of Education, Soledad Acuña, and the Undersecretary of International Relations, Francisco Resnicoff, the School “Oriental Republic of Uruguay” No. 15 DE 11, located in the Flores neighborhood.

On the occasion, the consul general in Buenos Aires, José Luis Curbelo, and other authorities of the Embassy will also participate, and a donation of school supplies to contribute to the school development of students.

Finally, the central act will be at half past six in the afternoon in the Planetarium with the presence, among other authorities, of the Argentine Foreign Minister Felipe Solá.

Uruguay’s Independence Week in Argentina began on Monday with the presentation of the film “Artigas: La Redota “, which was transmitted online on the website of the University of the Center for Macroeconomic Studies of Argentina (UCEMA).

The Puente de la Mujer was another point with the colors celestial and blue.

This film, directed by the Uruguayan director César Charlone and starring Jorge Esmoris, Rodolfo Sancho, Gualberto Sosa, Franklin Rodríguez and Yamandú Castro, among others, is the winner of six awards at the Gramado Festival, including Best Film, Director, Actor and Audience Award.