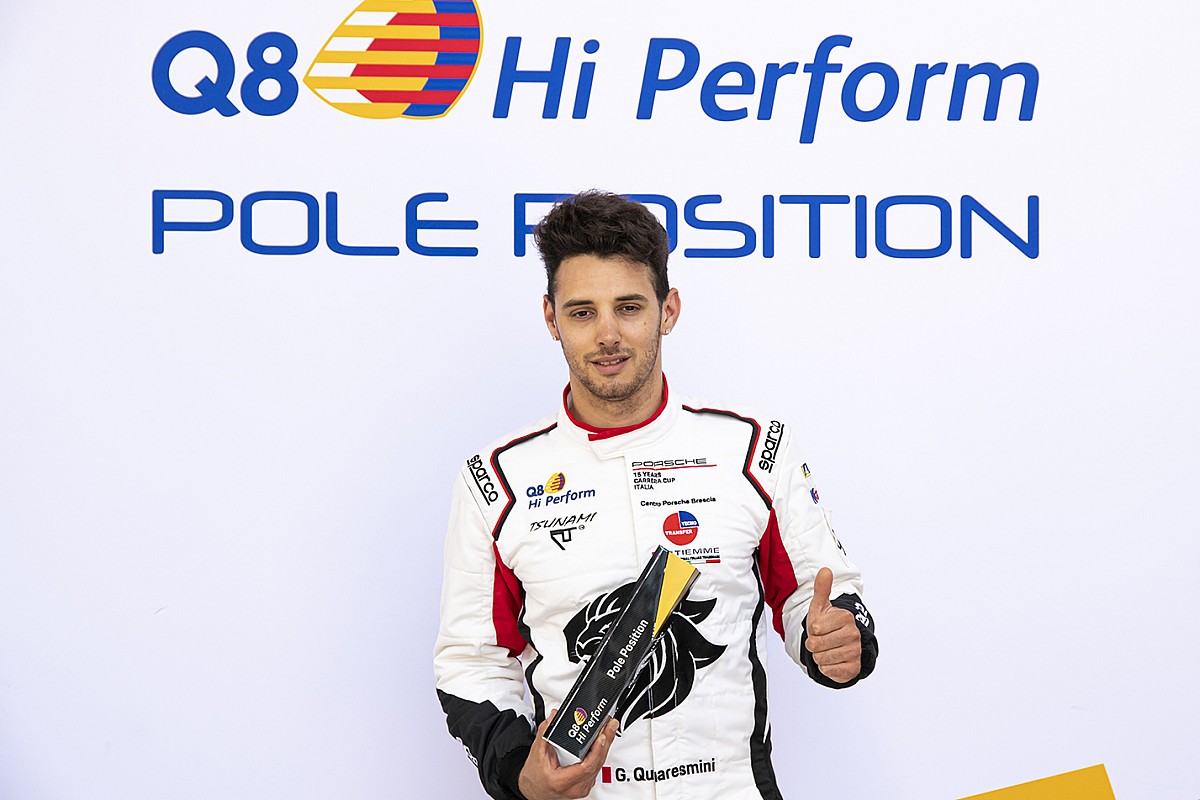 Mugello could not have given a more exciting qualification among the most anticipated duelists in this second round of the Porsche Carrera Cup Italia. The preliminary round of the two races, in fact the official tests, in the end rewarded Gianmarco Quaresmini on Alberto Cerqui, with the gap in the standings that is immediately reduced by 3 points in view of the super-challenge now announced in race 1 at 17.20 this afternoon.

The Tsunami RT driver is now 5 points behind the Cerqui-Iaquinta duo (the latter absent at Mugello) and therefore the championship is also increasingly at the limit after the lap records shattered this morning. Quaresmini built his pole position in particular in the central sector of the Tuscan racetrack, that of the Casanova-Savelli and the two Arrabbiate where the driver and the car set-up were perfectly married, as Quaresmini himself suggested at the end of the tests.

His examination of the qualification was punctual: “I am very happy, the car was perfect as always and the time set in PQ2 does not surprise me. On my best lap of PQ1 I found some traffic in a couple of points. I also had to lift my foot slightly downhill at the Casanova-Savelli and I lost a bit, but there I immediately realized that there was at least 3-4 tenths of a margin compared to the 49 “9 made. Then a nice ride in PQ2. Going under a 49 “4 will be tough here …”.

Now the thought flies towards the departure this afternoon: “Also considering the times, in Thursday’s test the race pace was really excellent and perhaps in this respect we are even better than in qualifying. So the goal is to try to escape by making pace right away. In the meantime, however, 3 points for we took the pole position and we are back in the championship! “.

A few meters away, in the paddock of the Carrera Cup Italia, there is a Cerqui who in turn tells a little about the paradox of having set a time even better than that of pole, but in PQ1 (1’49 “436 against ‘1’49 “492 by Quaresmini), failing to repeat itself in the decisive round. For everything, however, there is an explanation.

It is given by the same standard bearer of the Q8 Hi Perform team, who in any case will sit in the front row for race 1: “I put half the tire in the sand on a corner and lost a couple of decimos, a 49” 2/3 was within reach. Usually it goes down a bit compared to PQ1 and I felt that there was a small margin. I still did a good time in 49.5, I tried to relaunch myself but despite being the fastest in the first sector by now the tire was a bit worn and didn’t allow me to improve. The first row at the end is always good. We’ll see in the race to manage the tire well because at Mugello it is important to have an excellent balance of the car in the last laps. The race will be very technical: it is important to push, but push the right one so as not to go into crisis “.