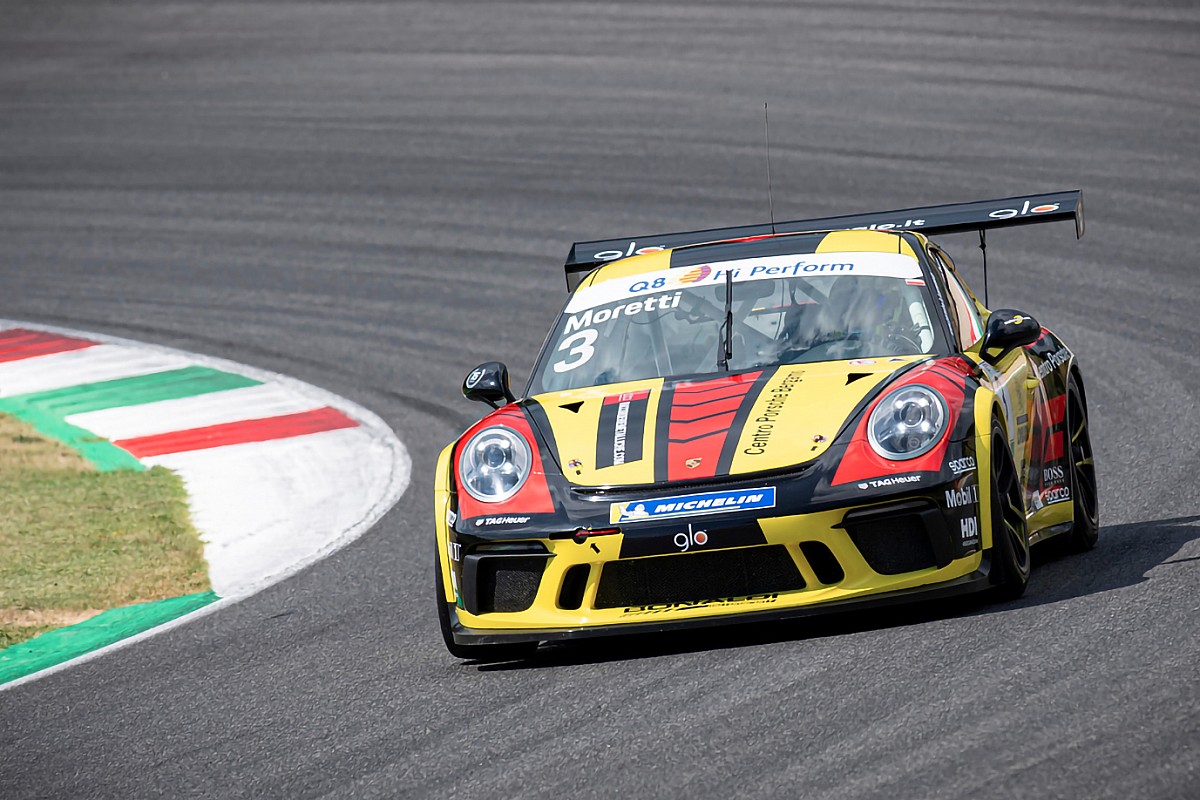 Resists Marzio Moretti at Mugello. He resists and wins race 2 of the second round of the Carrera Cup Italia. The 2002 Bonaldi Motorsport driver achieved his first personal success in the Porsche Italia single-make. A desired success came from pole position but after having had to keep Aldo Festante at bay until halfway through the race, only 11th at the finish line after a spin, and then Alessandro Giardelli, second and again on the podium with the 911 GT3 Cup of DInamic Motorsport.

With the young people of the Scholarship Program unleashed, the two most experienced Gianmarco Quaresmini and Alberto Cerqui chased and finished third (4 podiums out of 4 for the Tsunami RT driver) and fourth in order, with the top of the ranking which therefore varies little and remains in the hands of the Q8 Hi Perform standard bearer.

The race started with Moretti, Stefano Gattuso and Festante in front of everyone on the grid and all three with the new “wild card” tires mounted just to look for the bang. Moretti got off to a good start and took the lead, kept as said until the end despite the repeated attacks of his opponents. Different destinies, however, for the two standard bearers of Ombra Racing.

Gattuso was paraded in the early stages by both Giardelli and Quaresmini and then on the sixth lap he had to surrender to Cerqui, still going to finish in the top-5 for the second time over the weekend and therefore confirming himself in decisive growth.

After a good duel with Giardelli for the second position, obtained by overtaking the San Donato, and the fastest lap scored on the third lap in 1’51 “170, Festante soon took to the exhausts of the Bonaldi team, trying to pass it on lap 8 again at San Donato trying to take advantage of a slight long from his rival.

In an attempt to get inside, however, a slight contact (which seems a normal race situation) sent the rider from Campania into a spin and forced him to restart from the center of the group, without then being able to grab at least the top-10.

From then on, the duel for the victory between Moretti and Giardelli and that for the third step of the podium between Quaresmini and Cerqui excited alternately between various overtaking attempts. Until the final sprint, which saw them parade in order.

Behind the 4 and Gattuso was the author of a competitive and regular race Giorgio Amati, sixth at the finish with the second 911 GT3 Cup of Dinamic Motorsport. Benny Strignano tried to undermine him in the initial stages, who with AB Racing took the seventh position and the best result of the season and then in turn had to resist Leonardo Caglioni, a good eighth for Ombra Racing.

The top-10, for which he fought for a long time on the track also here between different twists, was then completed by the Ghinzani Arco Motorsport duo Federico Malvestiti and Daniele Cazzaniga, tenth ahead of Festante and the returning Enrico Fulgenzi, today more competitive than yesterday, when he suffered some technical problems.

After overtaking and counter-overtaking within a few laps, ALex De Giacomi’s fourth win out of 4 came in the Michelin Cup. The Tsunami RT gentleman from Brescia took another important step forward in the standings by regulating Marco Cassarà in a classification that follows that of race 1, with the Raptor Engineering standard bearer again second ahead of Piero Randazzo (on the podium with AB Racing ), Gabriel Rindone and Francesco Maria Fenici, while a point also goes to Gianluigi Piccioli (Ebimotors).

Also in the Silver Cup there is an extension in the standings: Max Montagnese makes the gap in race 2 with the 991 gen.I of Team Malucelli and stretches on Davide Scannicchio, second with ZRS Motorsport, while third on the podium also Carlo Scarpellini (Tsunami RT ).

With a shorter overall ranking situation than last night, the Carrera Cup Italia will face the third round of the season on 23-25 ​​July in Imola.