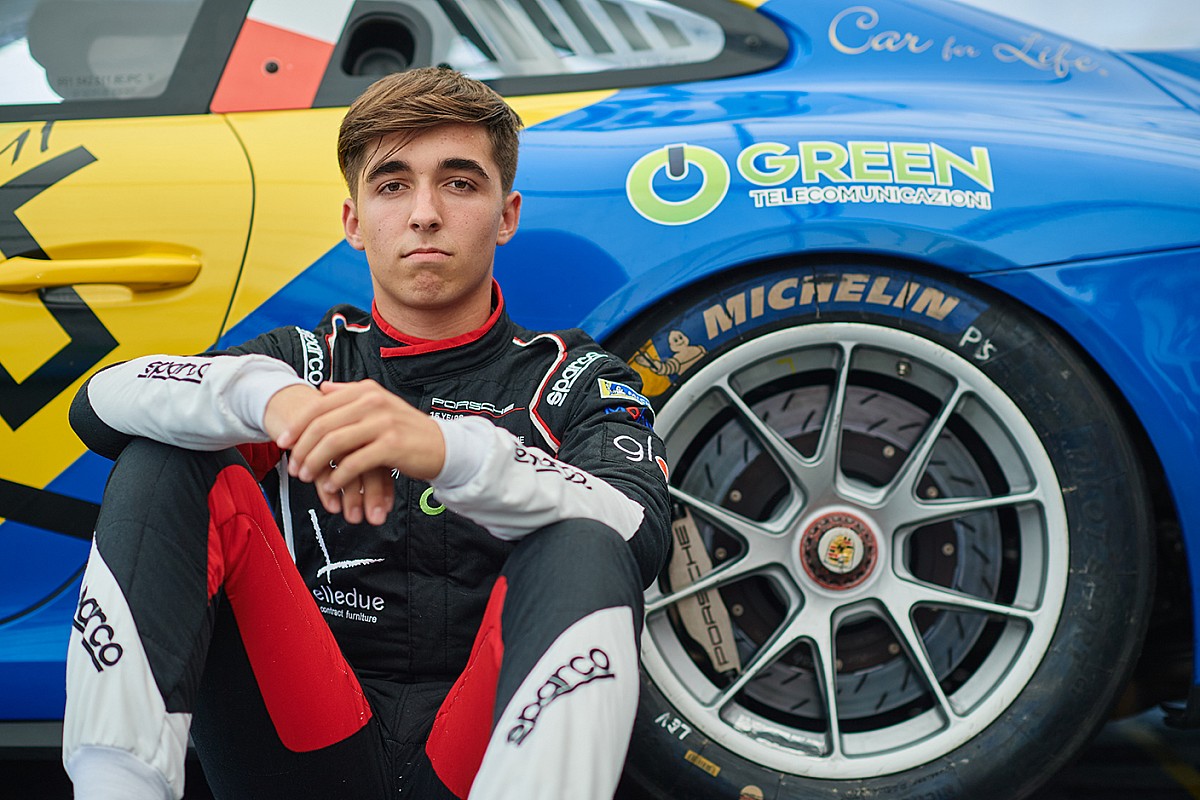 Giammarco Levorato is one of the rookies who is most “characterizing” himself in the Porsche Carrera Cup Italia 2021. He still has to get on the podium, after all he just turned 18 just yesterday, just on Saturday in Imola (cake and candles inevitable in hospitality!) , and comes directly from karts. However, in just three weekends in the Italian flagship store, today will already be the second time that he will start from pole position in a Sunday race thanks to the sixth place obtained in race 1.

Among other things, at his side in the front row there will be Leonardo Caglioni, the driver with whom he has the most bond. And for some time, well before they found themselves together in the Porsche Italia Scholarship Program.

Born in Padua in 2003, a staid boy and less shy than one might guess at first glance, Levorato joined the Tsunami Racing Team a few months ago, where he began his apprenticeship with the 911 GT3 Cup and now dreams of a leading role which in part has already been cut in the tricolor series. He studies at the socio-economic high school, next year he will have the maturity and in the meantime he is engaged in a career as a pilot, because, he explains, “I like studying, but I like running more!”.

“I come directly from karts. I started with the 911 GT3 Cup last winter with tests in Cremona with the Tsunami team and then we entered the championship. I started with karts 4 years ago, relatively late compared to many drivers who started as a child. But I was able to get off to a good start right away and catch up. “

In Carrera Cup you need to gain experience: are you satisfied with your journey for now?

“Yes, even if I never feel happy, I would like to do more and more. In fact, even with the team, even if we do a good position, I’m not satisfied. Competition is like that. However, I was able to immediately get a good feel for the car. A few improvements are still missing, especially with new tires and in qualifying. “

What is the goal from now on?

“At the beginning it was to gain more experience and it still is, however the real goal is to try to fight for the top positions, like everyone else! In Misano I managed to make a good recovery up to sixth place in race 1 and in race 2 I started from pole (just like this weekend in Imola, ed) and for the whole duration I was there in front fighting for the podium, reaching the top-5. I was very satisfied. “

And how is it going with Tsunami RT?

“I am really happy with it. There is a good harmony, we are working well. “

What advice do they repeat the most?

“Be quiet and use your head a lot. Don’t force, they tell me I know what I have to do, so I can do it and I know I have the potential to do it. “

Instead with the other Gianmarco, Quaresmini?

“Let’s say that he helped me a little more to find safety in the car, so he pushed me to dare a little more. Since the first tests. “

Instead the path in the Scholarship?

“A great opportunity that Porsche puts before us. It is an honor to be part of this project and I am enjoying it very well. We are doing well in the group, the coaches help us and even there, meeting after meeting, we can all improve. “

But coach Boldrini about what does he “reproach” you in particular?

“A little about everything, maybe small things, but he is very keen on the fact that we grow and improve.”

Did you expect so many of you new to go this fast?

“I expected that. I already know many of them from karts. Very good drivers who use their heads. I was sure that the level was high, both theirs and that of the single-brand ‘veterans’. A good fight, it’s good for both sides! “

But as a neo-18, what do you dream about later?

“As I think for many, that my passion becomes a real job and that I can do it full time. At the moment my dream is to be able to win some races. “

Why did you choose the GTs?

“When you get off the karts you have to make a decision. If you have a budget that allows you to go so far with the formulas it makes sense to try, otherwise it’s better something else. Personally, the GT world in terms of sportiness is even more pleasing. And in fact I decided with my eyes closed. I was sure to come here and feel good. “

Have you ever been in Porsche Italy, what do you have in Padua?

“Yes sometimes. Even to see the cars only for passion. And among other things, I wanted to start racing, as I said relatively late, right after going to a Porsche Festival, among other things right in Misano where I then ran my first race. It was a spark and the next day it all started! “

Beyond the study, how do you spend your time?

“Mainly in the gym to train and in the simulator at home, outside I like to be in the company of friends, have fun but not too much or I would compromise the sporting side. I like all sports in general, even experimenting with them, like tennis, but the only one I focus on is motoring! “

And with the 911 GT3 Cup? What level do you feel you have reached?

“I can’t know yet. Maybe in a few years I will continue to learn and learn. At the moment I feel that I have the car in my hand and that I can do what I want. Obviously, I don’t want to say the courage but in any case that little something that allows me to dare a little more. “

“It will be a discovery for everyone. Beautiful and difficult. Also nice because we will almost all start from scratch. It will be interesting to find out who will be able to adapt in the shortest time. “