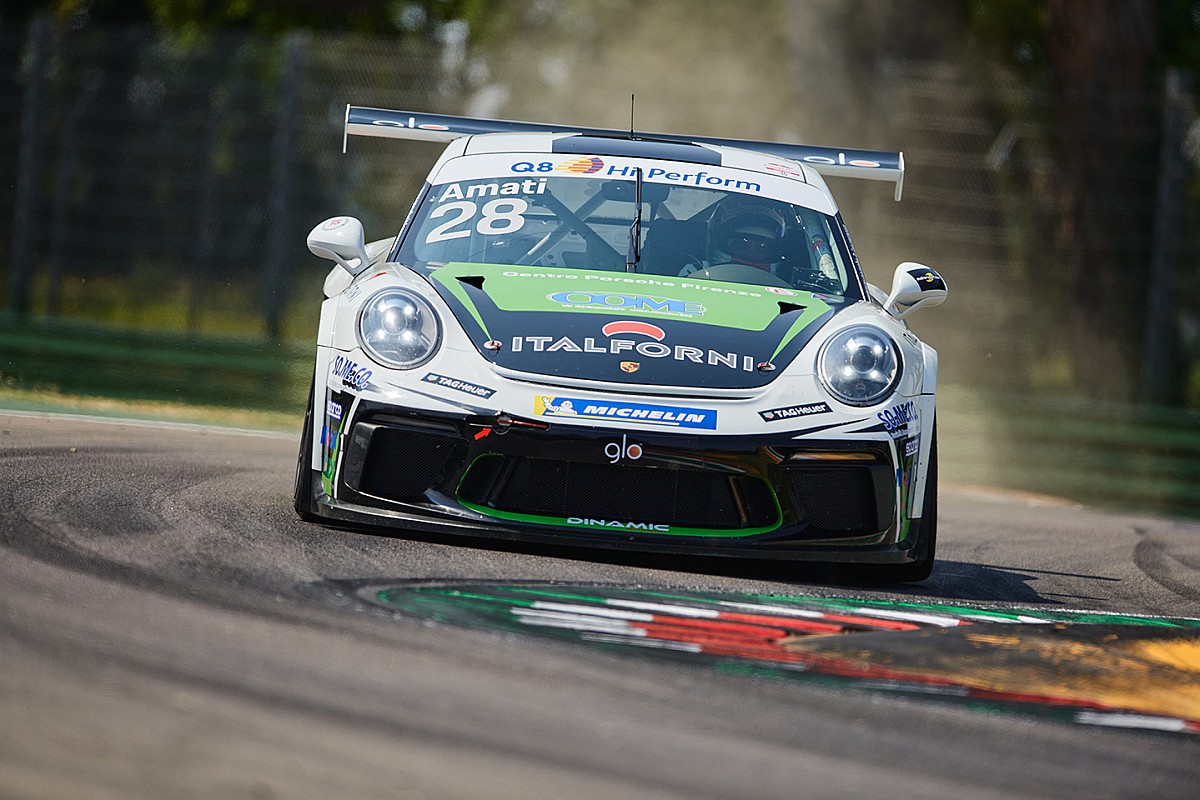 Celebrate Giorgio Amati’s first victory in Porsche Carrera Cup Italia race 1 of the third round of 2021 in Imola. Started from the front row and aggressive the right first in putting Ale Giardelli shortly after halfway through the race and then responding to Alberto Cerqui in the final, the 1999 Rimini rookie became the number 1 protagonist of a crazy race, also giving the first seasonal success to the Scholarship Program of Porsche Italia and commanding an all-Dinamic Motorsport podium on which Simone Iaquinta and this morning’s poleman Giardelli preceded, who may not have won, but in the end finds himself at the top of the championship!

Race 1 on the Santerno circuit reopened all the games and it was a succession of emotions, duels and contacts, some even beyond the allowed limits. Two safety cars used. While Cerqui loses the leadership (now he is 3rd) finishing off the points and Gianmarco Quaresmini comes back after a slow motion start and earns the points of the seventh place that keep him in second place in the general.

There will be a lot of work now for the race direction, because Imola was really put on fire by the protagonists of the Italian series. We will see later if all the positions at the finish line are confirmed, certainly the twists and turns have already arrived at the start.

Giardelli sprints well and keeps the lead over Amati and Cerqui, while Enrico Fulgenzi and Iaquinta arrive at a first contact, from which Fulgenzi comes out fourth ahead of Aldo Festante, Marzio Moretti, Leo Caglioni and Benny Strignano, author of an excellent start, and iaquinta only 11th. But shortly after, the two will meet again, because the 2013 champion forces a pass on Cerqui, finishing off-piste at Villeneuve and returning sixth after the excursion, while iaquinta recovered until he found himself behind him.

In the meantime Giardelli managed to keep his head despite the pressing of his teammate and Cerqui, author of the fastest lap on the third pass (later Festante will beat him). After a contact also between Strignano and Fulgenzi, on lap 7 the first safety car on the track to allow the recovery of the 911 GT3 Cup of Matteo Rovida, who retired on the track after a contact with Fenici. It will be just one of many under investigation …

A few minutes later, in the lap of the re-start, they spin off smoothly in the first part of the track, but after the Tosa Iaquinta and Fulgenzi come back at loggerheads. The first decisive moment occurs when Giardelli is slightly wide in approach to the Rivazza, allowing Amati and Cerqui to pass it, a maneuver repeated on the main straight also by Festante and Moretti who followed, with Giardelli only finding himself fifth at that point.

On the following lap Iaquinta manages to overtake Fulgenzi, who in the meantime is given a 10-second penalty to be added to the end time and which will make him lose the third place won at the finish line, classifying him, at least for the moment, only 14th.

These are the moments in which Gianluigi Piccioli and Diego Locanto in the Tamburello area also come into contact (another under investigation …) and above all in which Daniele Cazzaniga ends up in the barriers in the Tosa-Piratella area: it follows the second safety car to further recompose a group already at the very short irons.

At the restart, a couple of laps later and with only 4 minutes plus a lap to go, Amati slips well into the Tamburello but then ends slightly off-piste and Cerqui passes him in the exit gaining the first position. The race in front seems to be able to settle down, instead it is only the prelude to the second decisive moment of race 1.

Amati responds almost immediately by putting Cerqui on the Tosa and regaining command. Behind them also Festante tries to take advantage of it, but he touches himself with the leader of the Q8 Hi Perform classification and both end up off the track, managing to return only behind (Festante will be 8th, Cerqui only 18th and out of the points). It is the under investigation that will carry more controversy.

Not that the fights between Iaquinta and Fulgenzi have run out, because the two reassemble together until they finish 2nd and 3rd in the order behind Amati. The driver from the Marches, however, is already penalized, as already mentioned, and loses the podium in favor of Giardelli, the new championship leader.

While a white-black flag is waved in iaquinta, with the penalty imposed on Fulgenzi Marzio Moretti (Bonaldi Motorsport) goes back to fourth place, Leo Caglioni (Ombra Racing) to fifth and Giammarco Levorato to sixth, who on his 18th birthday comeback from 13th and earns pole position for race 2.

In the Michelin Cup Marco Cassarà earns his first hurray of the season from pole position, which is also the first category win for Raptor Engineering. A fundamental success for the Roman gentleman driver, 13th overall and in the standings now close to Alex De Giacomi, absent for the good news of the birth of his second son. On the podium with Cassarà therefore concluded Piero Randazzo (AB Racing) and an aggressive Andreas Corradina (Huber Racing), who in the final got the better of Gianluca Giorgi (Ebimotors).

The safety cars “risked” to stir up even the battles in the Silver Cup, where however Max Montagnese manages well in the final and wins for the second consecutive time with the 991 GT3 Cup gen.I of Team Malucelli, extending over Davide Scannicchio (2nd with ZRS Motorsport) and teammate Marco Parisini (3rd).

With the front row which, due to the inverted grid of the first 6 today, reads Levorato on pole and Caglioni at his side, tomorrow (Sunday) race 2 is scheduled at 1.15 pm live on TV on Cielo and Sky Sport Arena and in live streaming in HD up www.carreracupitalia.it. And it will be another half hour on fire …