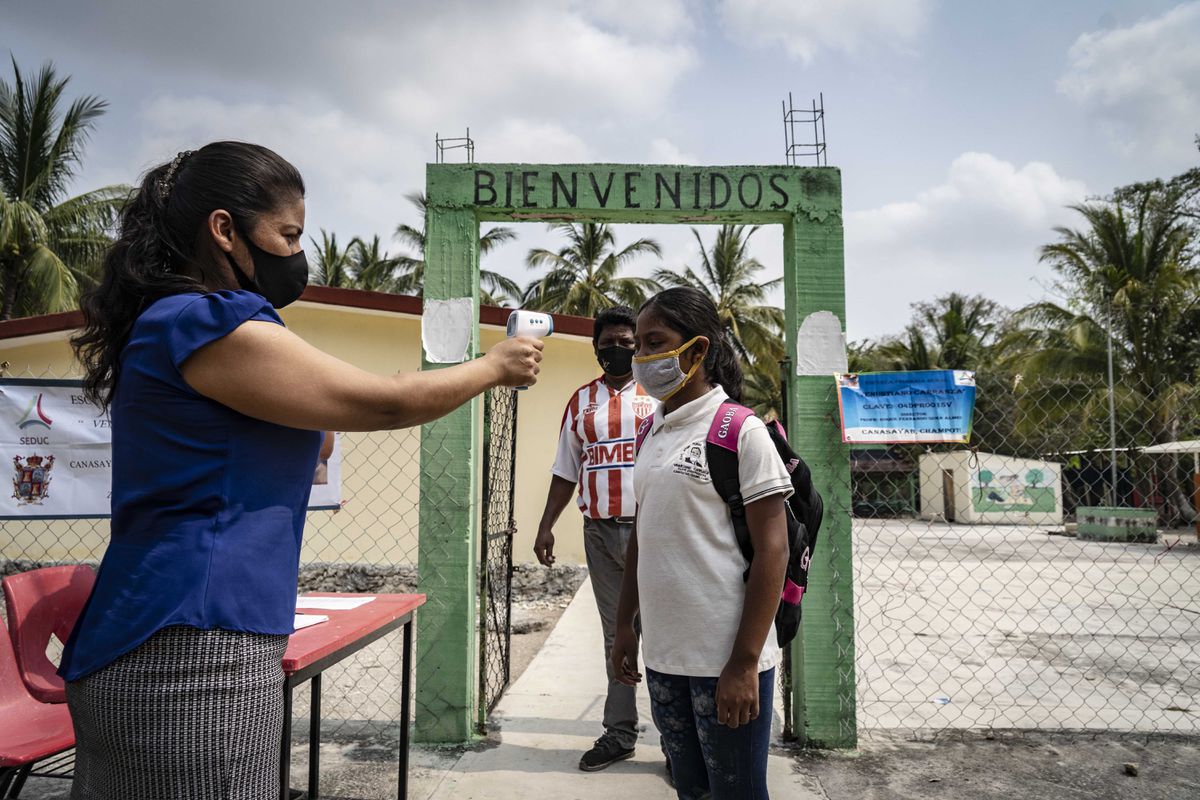 It is a morning without rest for Aracely Muñoz, 35, a resident of Canasayab, a fiery village lost among the cane fields of Champotón, a municipality located 80 kilometers south of the city of Campeche. Muñoz got up early this Tuesday to cook breakfast for her husband and children, clean the house and prepare to attend school, not because she is going to study, but because she will be in charge of the hygiene protocol imposed by the educational authorities after the reopening on Monday , of the schools. Their tasks consist of being under the scorching sun, measuring the temperature of the children entering the Venustiano Carranza primary school, verifying the correct washing of hands and the application of antibacterial gel before entering the classroom, and sanitizing the desks. “You really feel the pressure, because at this hour [11.00 de la mañana] I should be preparing food, because my husband works in the fields and comes back hungry. This changes our daily routine, but we must always support the education of the children ”, says Aracely resigned as she looks at her watch.

The so-called new normal imposed as a condition for opening schools has disrupted the lives of these isolated communities, eaten away by poverty. Here connectivity does not exist, so it was difficult for children to access the tasks that were sent by services such as WhatsApp. The teachers, concerned about the educational backwardness, visited the community once a week to deliver homework, but the study fell on the boys and their parents, always busy in the daily struggle to survive or unable to understand the assignments. “Home schooling made me stressful,” admits Aracely, whose 11-year-old daughter Mariely is in sixth grade at Venustiano Carranza. Her other son, Jonathan, 14, is in his third year of high school, but the high schools have yet to open. “Sometimes the children did not understand the homework and since I did not study, I asked myself: ‘what do I do now?’ The girl was even crying and I didn’t know how to explain. It became very complicated for me. It’s good that they opened the schools, because the teachers come here and take care of it ”, he says.

The lack of education weighs on this woman. She remembers sitting at a school desk that her father denied her study, assuring her that women only want to go to school and then leave. She was condemned to work at home, which is repeated when forming her own family. When the reopening of the schools was announced, she took a breath, but her husband objected to the children returning, a misgivings that remain. “But I told him that you have to support the children, that you have to make them feel like it,” says Aracely.

Canasayab is a community of less than 500 inhabitants. The people make a living by working in the fields, clearing land for crops or herding sheep. This is what Alex, 11, who is in fifth grade, does, although he cannot read or add correctly. The child is not interested in school. His, he says, is herding his six sheep. Well, Alex claims to have six sheep, but his teacher asks how he knows what that number is. Then Alex lists them by their colors: the black, the pinto, the brown … “Did you see?”, Says the teacher. “You must come to school to find out how many you have.”

The speaker is Abel Trinidad Giménez, 54 years old and 28 as a teacher. The man is sweaty, his mask soaked. It is seen that he suffers with his face all covered, because he also wears a plastic mask. He teaches first, second and third grade classes and this morning, in addition, he ensures that the hygiene protocol is fully complied with. “A week ago we talked with the parents so that they could learn about the new measures, they came to help with the cleaning of the school and the moms are available full time; they leave their chores to support their children’s education ”, explains the teacher.

38 children attend this school, but not all can be in a single class shift, so they have been divided into small groups of four for each of the two classrooms. One group attends from eight in the morning and the next one arrives at 11. On Mondays it is for students from first to third and on Tuesdays for students from fourth to fifth. On Fridays, the children who are furthest behind arrive. “It is a situation that we did not expect, although I am quite excited. I have seen that children who were well ahead before school closed, now have lowered their level due to distance education, because it was difficult for them to follow it. We are not going to start well, but we will do everything to support them ”, confesses the teacher.

The school suffers from many shortcomings. Parents complain about how dirty the walls are. There is no water, so the drinking fountain installed by the Ministry of Public Education (SEP) within the National Program for School Drinking Fountains is useless. The boys must take the water they will drink from their homes. There is also a lack of energy, so most of the time the ceiling fans that help – if they work – to alleviate the intense heat do not work. “The children ask permission to go to the bathroom, but those who go out do not want to go in because of the heat,” admits Trinidad. Boys are also required to wear face masks and a mask. In addition, parents will have to take care of the purchase of all the hygiene materials that the new normal requires once those delivered by the SEP are exhausted, a new load for them in a place where 150 pesos (about seven dollars) are charged to the day by day in the field.

The same situation is repeated in the other schools in nearby villages. In Justo Sierra Méndez, in the Cañaveral community —located an hour’s drive from Canasayab— Claudia Hernández, 26, and mother of four students, is in charge of the disinfection process for the children. She admits that with that and working at home “is enough”, but she does it so that her children can have a profession and break the cycle of poverty. “Today I got everything ready early so I could come to school. My children missed school, ”she says.

The families – mainly mothers – and teachers in these villages show a commitment to education that is moving. José Cauich is 46 years old and 23 as a teacher, 10 of them at Justo Sierra Méndez. He and his colleague, Concepción Uc, are from other municipalities and spend the week here to guarantee classes. José sleeps in one of the two classrooms: when the day is over, he sets aside the desks and improvises his bedroom. Concepción is given a posada by a family. “We are excited to return. This is a sign of the importance of the teacher’s work, because by having the children in front of us we can support them. This interaction is essential for them and their learning, ”says the teacher after leaving a math assignment for the three girls who are attending school this afternoon. “We know we have to deal with all this protocol,” explains Cauich, seeing her students suffocated with their faces covered. And he continues: “But it is important so that this new normal is not upset and that we have to close the schools again. That would be a real tragedy ”.