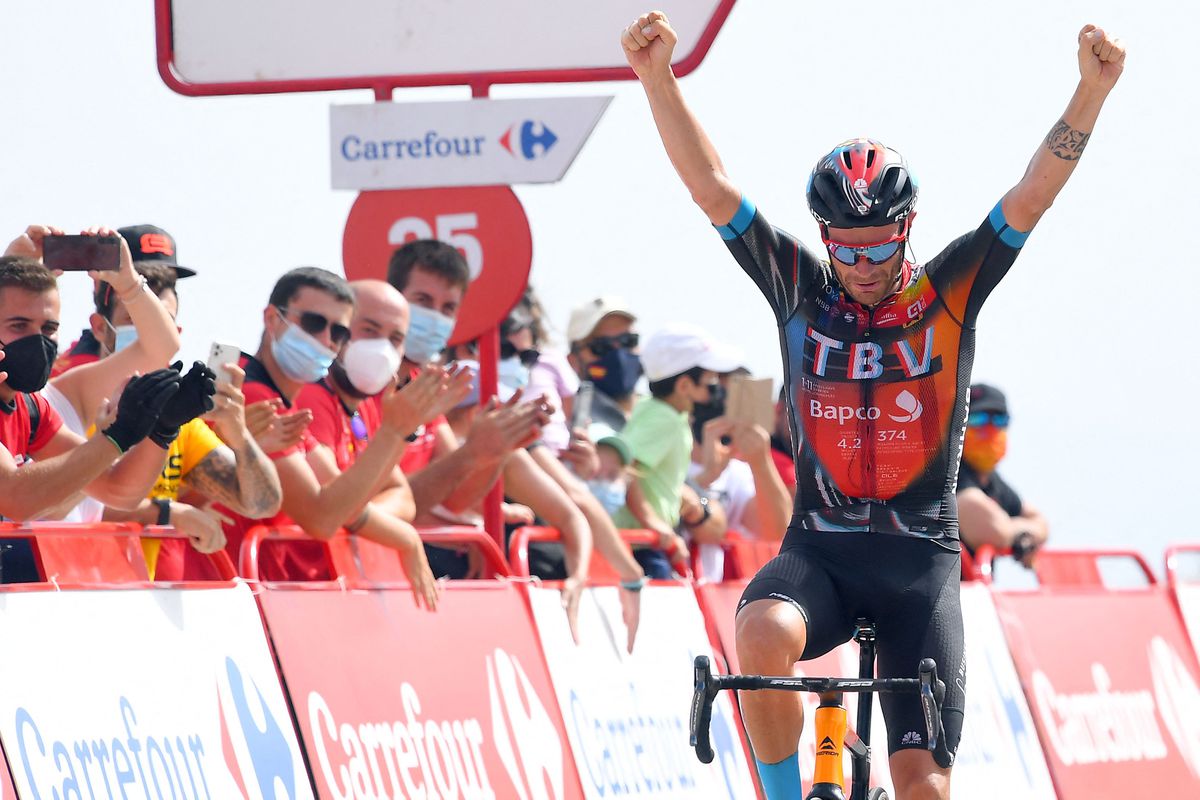 The cyclists devour the landscape, which is that of Shangri-La, and the ascent to Velefique, there, on the lost horizon, the whitewashed houses, the town bright white against the hillside, it is their door, the door of paradise, of immortality, so high, which would cost so much to reach if it were not for the inexhaustible forces of Enric Mas, who has attacked. There are five kilometers to go. Behind him, the chaos, suspended African dust, remains of the simun, and only Primoz Roglic.

But he has been transformed in the heat, and it seems that he does not even sweat when, rhythmic like a cricket, the insect that is music, turns the cranks of his bicycle, fast, fast, in the dry mountain, and only Roglic can respond to his music. , in red, and the two play with each other, they seem so superior. They play with the grasshoppers that chase them, with Adam Yates, whose chaotic, jumping eagerness, almost as capricious with that of the acrobatic kids that do not stop between the stones of the slope, and so agile, destroys Mikel Landa, destroys his companion team, to Egan, who should take care of. They seem games of betrayal, of grim looks, of cunning. They are not. They are the games of survival, of follies committed in the heat of August that the height of the mountain, up to 2,000 meters, where oxygen begins to be scarce, makes it more unbearable. There are no rules or tactics. Egan, cricket, cri, cri, talks about rhythm, his rhythm, the changing rhythm of his partner or that of his compatriot Superman López, which breaks him and ends his morale, so strong on the bus, at the exit, when All the Ineos, the strongest, they say, decide that it will be D-day, that they will force the march up Calar Alto through Venta María Luisa, and that they will hit it even harder in Velefique, and from there they will jump.

The climb, the toughest of the Vuelta a España in the toughest stage so far, is a save who can for them and for all except for three, for Mas and Roglic, the first two in the general standings, who have a clear purpose , take time, thus, in the abstract, buy time, and for Damiano Caruso, who wants to win the stage, who is going to win it, and feels in his Sicily: down there, in the desert, where Sergio Leone told the stories of the West, there are no more decorations, but plantations of young olive trees, and their smell, that of freshly pressed olives, reaches him from the oil mills during the long flight to the Sicilian, Caruso sono, as Camilleri makes Montalbano, his heroes speak, and, sentimental like very few, says that he feels at home, that he only misses the sea and its breeze. But not the sun or the heat. “There was not a shadow edge,” says Caruso, second in the Giro after Egan, winner of a stage on the edge of Italy, close to Switzerland, on the edge of Maloja, the Giacometti valley, where the sun does not reach , so deep and vertical, so far from Sicily that, contrary to all the cyclists who emigrate to Andorra, to Monaco, he refuses to leave. “And the heat … At times I thought there was no oxygen, I couldn’t breathe.”

Like a musician attentive to the tempo, Caruso manages in the final 12 kilometers the five minutes with which the ascent that scares everyone begins, a Tour stage in the mountains of Andalusia. Cri, cri. Like Mas and Roglic, who end up looking at each other and understand each other with their eyes. Roglic does not seem Roglic, far from him the temptation of the exhibitions of before except when, after the first attack of the grasshopper Yates, he sprints on the mountain, a series that leaves everyone speechless, pensive. They collaborate. The Majorcan collaborates more, who has more need to distance Egan, perhaps the most dangerous rival for his interests, which is first to try to secure a podium of the Vuelta to which he has not climbed for three years, and then to think of something bigger . “I’m going to go for red, which is very important,” says the Mallorcan climber, who smiles, he has felt so strong, stronger than in a long time, he says. “And, yes, one day I will be able to put Roglic on the ropes.”

At the end of the stage, and from above, yes, you can even see the Mediterranean, far, far, and even the coasts of Africa, the accounts are settled. In their five joint minutes, Roglic, who only accelerates hard to win 6s of bonus (4s for Mas) and even slows down so as not to leave the Mallorcan far behind, so as not to discourage, and Mas, are ahead of the Australian Haig by 40s, who takes the role of Landa, headless from his Bahrain, to Superman and Yates, and in more than a minute to Egan, who is already almost two minutes behind Roglic in the general classification, with Mas second, at 28s.

“I looked at the top from below and I said to myself, how far it is, how can I get there in this heat,” says Roglic, whose almost poetic vein has been awakened and beats almost as strong as the irony with which he responds when asked. if he feels better, worse, the same as in the two previous Laps he won. “I don’t remember how I was in other years. I don’t ask myself those questions. I only know that I am closer to victory than in the first stage, eight days closer … “