Building that collapsed in Florida is completely demolished 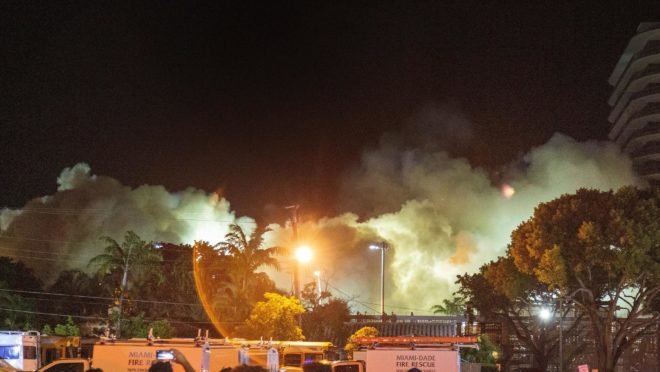 View of the debris of the Champlain Towers South condominium after its demolition in Surfside, Florida, USA, July 4, 2021| Photo: CRISTOBAL HERRERA-ULASHKEVICH/Agência EFE/Gazeta do Povo

The building that had partially collapsed in Surfside Beach, Florida, on June 24, was completely demolished by local authorities on Sunday night (4), around 10:30 pm (23:30 GMT). Controlled demolition was brought forward to before Storm Elsa arrives in the region, which is expected to take place in the next few days. Officials feared the building might not withstand strong winds and rain, which would put first responders and residents in the area at risk.

“This demolition is a very tragic situation, not only for those who are still hoping to find their surviving loved ones, but also for the surviving families who have left the building and all their belongings are in that building,” said Democratic Representative Debbie Wasserman Schultz before the demolition of the building.

The search for victims of the partial collapse had been temporarily interrupted on Saturday, due to preparations for the total demolition of the construction. At least 24 people have died and 121 are missing – the number has dropped due to the location of living people who until now were erroneously on that list, according to Miami-Dade Mayor Daniella Levine Cava.

The demolished part had 84 apartments, while the one that collapsed had 55.