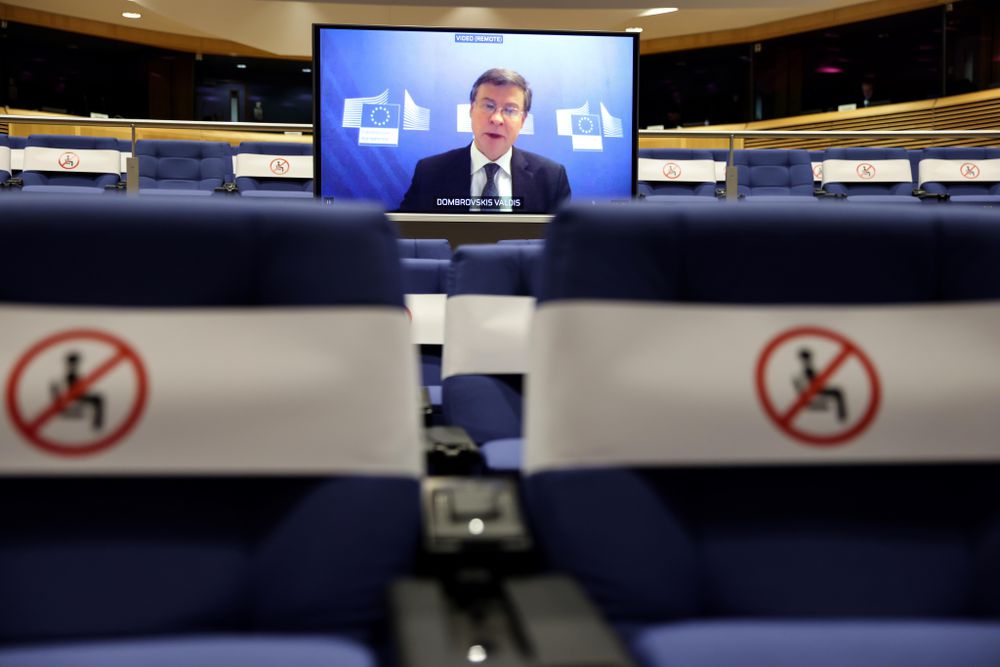 Brussels intends to boost the financial autonomy of the EU in the face of political instability in the United States and the suspicions that China continues to arouse. The European Commission gave the green light yesterday to a new proposal to challenge the dollar for its hegemony in world financial markets to correct “the vulnerabilities of an international financial system” dominated by the US currency. The Community Executive intends to advance in the banking and capital market union, take advantage of the massive issuances of European bonds and protect itself from Washington’s sanctions policy.

The European Commission is looking forward to the inauguration of Joe Biden as President of the United States. The Commission has been addressing a broad agenda with its transition team for weeks, ranging from international trade to 5G to the fight against climate change. However, the it was trump it has left wounds among the Twenty-seven, who have been embroiled in commercial battles with what has traditionally been their main ally.

The EU wants to recover the transatlantic relationship, but also to arm itself in the face of the weaknesses that the aggressive policy of Donald Trump has exposed. Proof of this is the difficulty of shielding their companies from the sanctions that Trump imposed, for example, against Iran. Despite the fact that the EU distanced itself from this dynamic, the international payments network Swift, based in Belgium, decided to follow Washington’s guidelines and close the channels with Tehran.

Brussels proposes moving towards an “open strategic autonomy”, which does not tie it to the policies decided by the United States or make it dependent on the great factory that China has become. To do this, the Commission rescues its project to relaunch the euro as an international currency. “A stronger euro at a global level is not only in our interest, but also in the international community,” said Community Vice President Valdis Dombrovskis.

The previous Executive of Jean-Claude Juncker has already set itself the objective of raising the profile of the euro after it has completed two decades of its entry into force. The latest report from the European Central Bank (ECB), however, indicates that the use of the euro as an international currency remained stable in 2019, in second place, but at historic lows. Brussels sees, instead, the bottle half full. Since Juncker’s communication, the Commission does believe that something has moved. “The proportion of natural gas contracts signed in euros rose from 38% in 2018 to 64% in 2020,” said the Commissioner for the Economy, Paolo Gentiloni.

In addition to the measure of converting all EU contracts to euros – suggested by former commissioner Miguel Arias Cañete – Brussels also looked at sectors such as raw materials, food or the aeronautical sector. Community sources explain that, on this occasion, the approach is much more global, with 15 actions: from the diversification of European suppliers to the development of the Banking Union.

Brussels believes that the work must start at home, finally rolling out the Banking Union – with the Community Deposit Guarantee Fund – and deepening the Capital Market Union, which is advancing with feet of clay. But above all, Brussels believes that it must preserve its most valuable asset: the single market. And the way he has chosen to do it is the call Next Generation EU, the reconstruction fund that will require a debt of 800,000 million euros – at current prices.

“The EU is going to become a major player in financial markets,” said Dombrovskis. “We have already seen strong investment interest with the issuance of social bonds under the Sure instrument to keep citizens in employment,” he added. The communication approved yesterday by the Commission, in addition, points out two other major areas also linked to the recovery plan in which the euro can fight: the New Green Deal, where it can promote greater trade in emissions rights and create a bond market green, and the digital agenda, where he hopes to be able to face cryptocurrencies with the digital euro studied by the ECB.

The EU is also aware that it lacks large financial infrastructures and that it depends on many US institutions, starting with investment banking. And even in the case of institutions in European territory, the dominance of the dollar ends up being overwhelming. That was demonstrated by the tough and active sanctions policy of Trump and the Swift network.

Communication dedicates a large space to this section. To begin with, the Commission wants the companies that provide this type of financial infrastructure to carry out, in agreement with the ECB and the banking authorities, a comprehensive analysis of the “illegal application of unilateral sanctions by third countries”. In addition, it undertakes to study formulas so that EU citizens or companies that can be defined as targets of sanctions can be protected from these actions.

The document goes on to state that countries should examine foreign investments and purchases of shares in strategic companies. And when assessing it, they will have to take into account the possibility that a key company in the EU could succumb to the demands of another country to apply sanctions. In the event that this threatens public order, Brussels may express its opinion. Finally, the Commission wants to make a leap in its own sanctions policy. Therefore, this year it is committed to reviewing those practices that may undermine its effectiveness, including the use of cryptocurrencies.

The relaxation of state aid rules continues in 2021

The European Commission yesterday sent to the capitals a draft to extend until December 31, 2021 the suspension of the rules on state aid – which had already been extended until June – given the costly recovery of the European economy. “As the second wave of the coronavirus outbreak continues to profoundly affect our lives, businesses across Europe need more support to weather the crisis,” Executive Vice President Margrethe Vestager said in a statement. Brussels also proposed that countries increase the amounts of aid available to businesses. Until now, the limits were set, in general, at 800,000 euros – 120,000 euros for fishing firms and 100,000 for agricultural firms – for measures that allow companies to continue paying for fixed costs that cannot be covered with their income – now, until three million euros – due to economic uncertainty. The Commission also wants to offer the possibility for States to decide to convert instruments that were originally reimbursable into grants. Brussels had given its companies a free bar for State aid for the first time on March 19, 2020. Therefore, if this decision goes ahead, it will mean that it will have suspended the Community rules on State aid for almost two years.