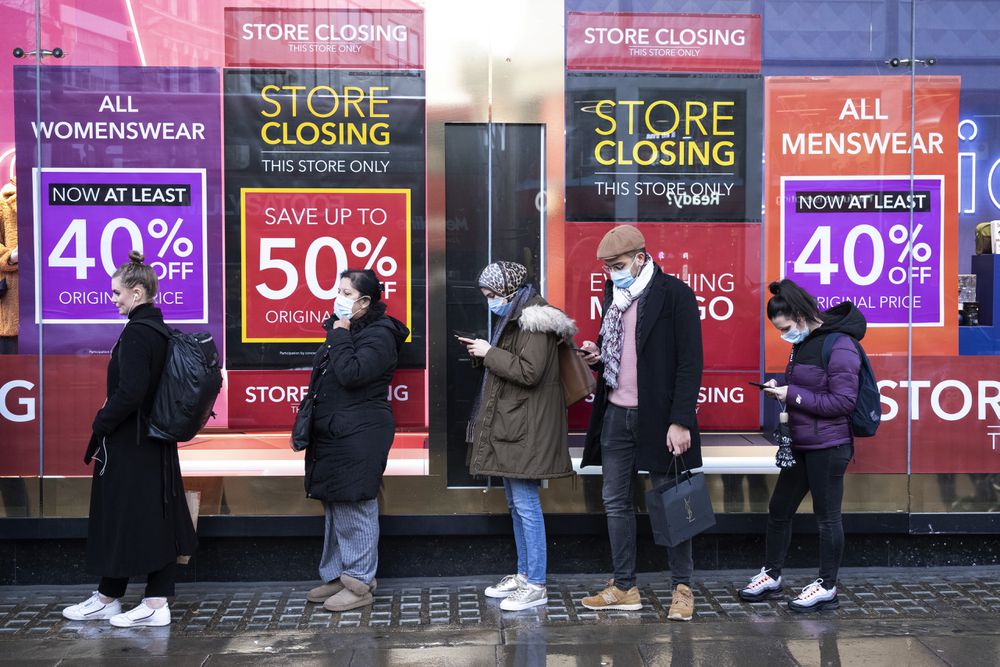 It is a cold December afternoon in London before the lockdown and Zeine, 29, waits behind 30 other people to access the Debenhams department store on Oxford Street. She just wants to “see what offers there are” and she is not the only one, the place has been full for days from the first hour, an employee has, and the virtual queue on the website is at least 20 minutes. It is not that this company founded in 1778 has suddenly returned to its former glory, but the opposite: that week, what became the largest chain of department stores in the United Kingdom announced that it was going into liquidation. “Everything must go,” read the signs that flooded the premises as curious as Zeine prowled between sales of up to 70%. “It’s sad, but it’s a very old chain,” she says. “I didn’t know I was in trouble.”

This tragic fate haunts several British trade giants caught off guard by the pandemic at a time of financial weakness and fierce competition. Famous brands have been forced in 2020 to change hands, reduce workforces, close stores and seek investors who allow them to remain afloat in a market regulated by regulations that have become unpredictable.

In such a scenario, it is not surprising that Debenhams has not found a rescue. Their hopes ended the day another consortium announced that it was entering bankruptcy: Arcadia, owner of the clothing brands Topshop, Topman, Dorothy Perkins and Miss Selfridge, among others. It carries a debt of more than 500 million pounds (548 million euros), according to The Telegraph, and, together with Debenhams, they leave 25,000 jobs in limbo.

Retail in the UK has lost 176,718 jobs and 15,747 stores during 2020, according to the Center for Retail Research. Layoffs and restructuring continue despite the fact that the government has extended the temporary employment regulation files, suspended evictions and delayed payment of taxes.

Some companies have managed to get out of trouble, like the shoemaker Clarks. After 195 years, the founding family ends 2020 losing its control to let LionRock Capital, a Hong Kong venture capital fund, become the new majority shareholder in exchange for injecting 100 million pounds (111.7 million euros ). The clothing brand Peacocks, another 136-year-old historical, follows in his footsteps and is looking for a new owner to save its more than 400 stores and more than 4,000 employees. Monsoon, Accessorize, Oasis, Warehouse and Cath Kidston are some of those that have gone through a bankruptcy in 2020. Others such as Marks & Spencer, John Lewis or Burberry have been more resistant, but not without avoiding massive layoffs that, in in the case of the first, they exceed 7,000 workers.

For the experts, there are no surprises: the chains that dominated the high street Britain in the 1990s had already lost power before the pandemic. “Covid-19 has not been the cause of anything, but a catalyst,” says Richard Hyman, partner at Thought Provoking Consulting. In the year ending September 2018, the latest data available, Debenhams posted the worst losses in its 242-year history: 491.5 million pounds (540 million euros). Its annual turnover has fluctuated between 2,100 and 2,300 million pounds during the past decade. But the high level of indebtedness and operating costs, as well as the devaluation of its brand, ended up sinking it.

“After the nineties, the large traditional businesses were surviving with their loyal clientele, they settled for that and did not move with the times. They thought that customers would remain loyal to them and it was not because there are already many more and cheaper options, “says Julie Hodson, professor of Fashion Industry at the Metropolitan University of Manchester. “Like Marks & Spencer, your client is someone in their 40s and 50s. But people of that age now have a more youthful mentality and no longer want the pearl earrings and knitted sweaters that she sells.

The lack of success of its Internet sales strategies in a country where a third of purchases are made online has been another determining factor, says Hyman: “It is a structural change that has occurred over several years. Among developed economies, the UK has the highest penetration of online commerce, so what happens here is yet to reach other countries. ” Henley Business School Marketing Director Adrian Palmer also believes that “those who adapt to the Internet will survive,” especially in the case of “outdated” models like department stores. “We have seen the emergence of niche businesses that do their job very well: specialized in jeans, glasses… The department stores have tried to do everything reasonably well, but without standing out at all. As a result, they end up being a bit more expensive and lacking depth in any product. “

The clearest problem, however, is in the high operating costs of the large volume of stores and their expensive rents. Arcadia and Debenhams total 1.5 million square meters in the United Kingdom, where the annual rent of the commercial square meter starts at 1,291 euros in Wales to 17,989 euros in London. In its latest results, Debenhams claimed that it spent 290 million pounds (318 million euros) each year on rent and maintenance costs and that 110 of its 165 stores were “overvalued.”

Most of Debenhams’ debt dates back to three years in the hands of a trio of venture capital funds – TPG, CVC Capital and Merrill Lynch, who paid £ 600m in 2003 to take control of it. they sold their properties and signed long and expensive rental contracts with the new owners, took away 1.2 billion pounds in dividends and put the firm back on the stock market. A round business that, however, multiplied by 10 the indebtedness of the department stores. “Debenhams ran into debt that became more onerous as it lost ground in the market. You could see that it would end like this, ”says Hyman.

In Arcadia’s failure, its owner, Philip Green, is singled out as one of the main culprits. “The company has been accused of withdrawing money for the owners and not investing in the areas where it needed it, such as the Internet,” explains Palmer. It is the second time that one of Green’s businesses has neglected its employees’ pension fund, which could cause them to lose at least 10% of what they would be entitled to upon retirement.

Hopes are pinned on US firms interested in buying parts of Debenhams and Arcadia, which could save at least some of the jobs. Although the pandemic continues and, according to Palmer, businesses will continue to disappear, although “all the big ones that had to fall have already fallen.”

Latest news of the coronavirus, live | The American laboratory Merck stops the development of two vaccines because they show lower efficacy than those of other companies

Magdyel Ugaz speaks out against criticism for his attitude on video