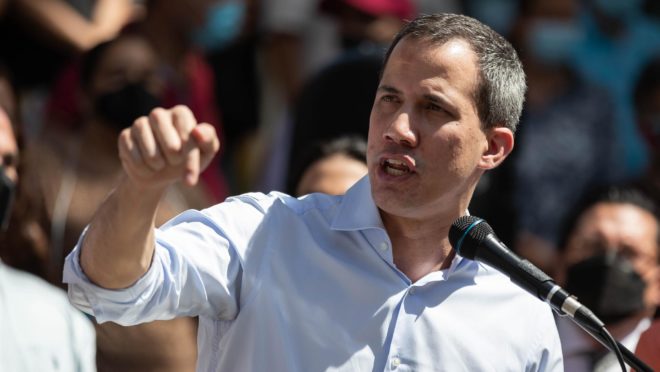 British highest court referred the case to its commercial division to determine to whom Venezuelan gold deposited in the Bank of England should be delivered, to Guaidó or Maduro| Photo: EFE/Rayner Peña R.

The Supreme Court of the United Kingdom partially accepted an appeal by Juan Guaidó, leader of the opposition to the Venezuelan regime, on whether he or the dictator Nicolás Maduro should control the gold deposited by the South American country in the Bank of England and which is valued at approximately of 1.6 billion euros.

Britain’s highest court has referred the case to its commercial division to determine to whom the gold is authorized to be delivered.

In the decision, the court stressed that a prior communication from the British government “was a clear and unequivocal recognition of Mr. Guaidó as president of Venezuela.” With that, this part of the appeal was accepted by the court.

The Supreme added that the country’s courts are inclined to accept that the British government does not recognize Maduro as president of Venezuela “for any purpose”.

On the other hand, the court found it necessary to assess whether Venezuela’s Supreme Court decisions regarding the opposition leader’s position are null or void, and asked its commercial division to determine whether to authorize or deny delivery of the gold to the council. appointed by Nicolás Maduro, who submitted a request for arbitration when the bank refused to execute his request for liquidation of reserves.

The Bank of England had refused to carry out this request because of the pro-Guaido stance of the British government.

The Supreme Court made the decision after considering the appeal presented by the board appointed by Guaidó to the Central Bank of Venezuela (BCV), which intended to overturn a decision that was unfavorable to it and issued in October by the Court of Appeal.

That court had rejected the “unambiguous” recognition given by the British government in 2019 to the opposition leader as the “interim constitutional president” of Venezuela until legitimate elections were held.

The official BCV board appointed by Maduro – which is opposed to the one appointed by Guaidó – wants to sell around 1 billion euros of these assets in gold to buy equipment to fight the Covid-19 pandemic.

After learning about the decision, Guaidó expressed satisfaction with the decision of the British Supreme Court. Maduro’s lawyer in London, Sarosh Zaiwalla, said the Venezuelan dictator wants to take the case forward.

Esposito and the tantrums in Basel: "I'm sorry. It's time to become a man"