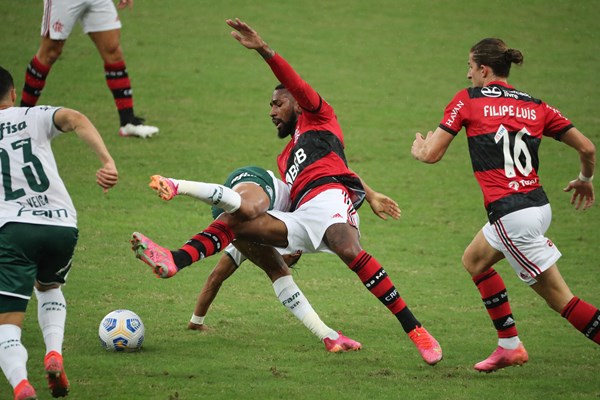 The Brazilian Globo Sport website reported on Saturday that Flamengo midfielder Gerson signed a five-year contract with Olympique de Marseille, the fifth in the French Football League, noting that the official confirmation will not take place until next July.

The leading sports news site in Brazil confirmed that the contract was signed in Serbia on Friday, with the 24-year-old playing for his country’s Olympic team in a friendly match Saturday against Cape Verde.

Many French media also considered the deal almost finished, after hard negotiations that lasted for more than three weeks.

The Brazilian website added that Marseille must pay 25 million euros to Flamengo, Gerson’s current club, with whom he will still play matches in the Brazilian League and the Libertadores Cup before traveling to France “during the first half of July”.

The deal will be officially announced after the medical examination. Gerson emerged in the ranks of Fluminense, Flamengo’s competitor in the state of Rio de Janeiro, and moved early to Europe, specifically at the age of eighteen in 2015, to play with the Italian Roma, who signed him for 16 million euros. He never managed to establish himself in Italy and ended up returning to his homeland in 2019, after an unconvincing spell on loan with Fiorentina.

He blew himself up again with Flamengo and became a fixture in last year’s Copa Libertadores winning squad, which fans of the most popular Brazilian side have been waiting for for 38 years. According to Brazilian media, his move to Marseille is a top priority for his Argentine coach, Jorge Sampaoli, who saw him playing in Brazil when he coached Santos, and then Atletico Mineiro.