Brazil wants to occupy Ukraine’s space in the world corn market. what are the challenges 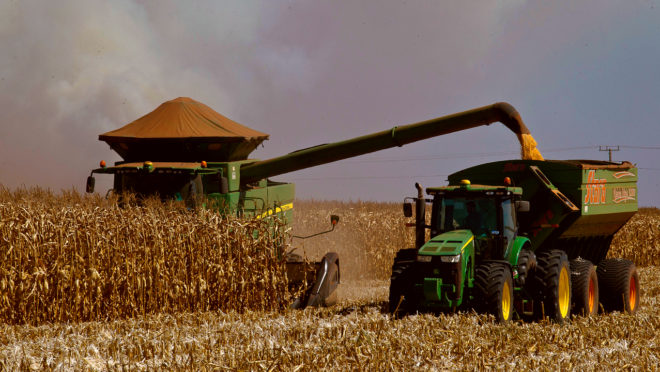 0
SHARES
0
VIEWS
Share on FacebookShare on Twitter
Dry climate and higher fertilizer prices are some of the challenges to increase corn production in Brazil| Photo: Daniel Caron/Arquivo/Gazeta do Povo

One of the world’s biggest cereal producers, Brazil wants to occupy the space that Ukraine can leave in the corn market and believes it has the capacity to do so, despite the many challenges its production still faces.

Strong demand and the Russian invasion of Ukraine have pushed international corn prices to the highest level since 2012, which is drawing the attention of Brazilian exporters. Ukraine and Russia together represent between 16% and 18% of the world corn export market.

As for Ukraine, there are many doubts about the viability of its harvest due to the lack of manpower – busy defending the country or fleeing Russian attacks – and supplies, such as fuel; and by blocking its main points of export.

In the case of Russia, the international economic siege of Vladimir Putin’s government will put its business operations abroad in serious difficulties.

With these two countries out of the equation, the market looks to two other important players in the sector: Argentina and Brazil, the world’s second and third largest corn exporters, respectively, behind only the United States.

Ukraine is fourth, according to data from the US Department of Agriculture – and that is where the urgency of some of its biggest customers, such as the European Union, arises to guarantee grain supplies.

Forecasts in Brazil for the second corn crop of the season are good, after a first one that was affected by a severe drought. The National Supply Company (Conab) of Brazil estimates that the total production of the cereal will grow 29% in the 2021/22 harvest, reaching 112.3 million tons, boosted by this second harvest.

“We are able to produce a little more and we are already planting more than last year,” Cesário Ramalho, institutional president of the Brazilian Association of Corn Producers (Abramilho), told EFE.

“Brazil has a very good growth potential and we are facing a great opportunity. We have a market, buyers and an area for that”, completes Ramalho.

Climate, costs and fertilizers are challenges to increase corn production in Brazil

However, several factors can ruin this expectation. For starters, the weather forecasts are not the best and there is a possibility that the La Niña phenomenon will last until June or July.

In this context, Felippe Serigati, a researcher at the Agribusiness Center at Fundação Getulio Vargas (FGV Agro), considers that, if the second corn crop finally turns out to be good, it will serve mainly “to cover the damages” of the first.

In addition, according to Ramalho, Brazil consumes 70% of its production, as it is the world’s largest exporter of meat and a good part of its corn is used to manufacture feed for swine and poultry.

But with prices and international demand on the rise, local producers may start looking more towards the export market. “Brazil has to be careful because it needs corn a lot and there is a certain panic. This rush for corn worries me”, says Ramalho.

See also  Setbacks accumulate for Putin: six fronts that are not going as the Kremlin would like

And then there is the problem of high costs and doubts about the supply of fertilizers, in which Russia is a major world producer.

“The corn sector will start the next cycle with very high costs and the uncertainty of having access to these production inputs”, adds the specialist.

However, Ramalho minimizes the possible lack of fertilizers due to sanctions against Russia, which mobilized the Brazilian government in search of new suppliers. “We have very well fertilized land. We can plant a year with less and in the most fertile lands even without them [adubos]”, it says.

Elections France: the keys to the race to the Elysée Palace

With blood and fire: this is how the battle for Kiev progresses in the streets