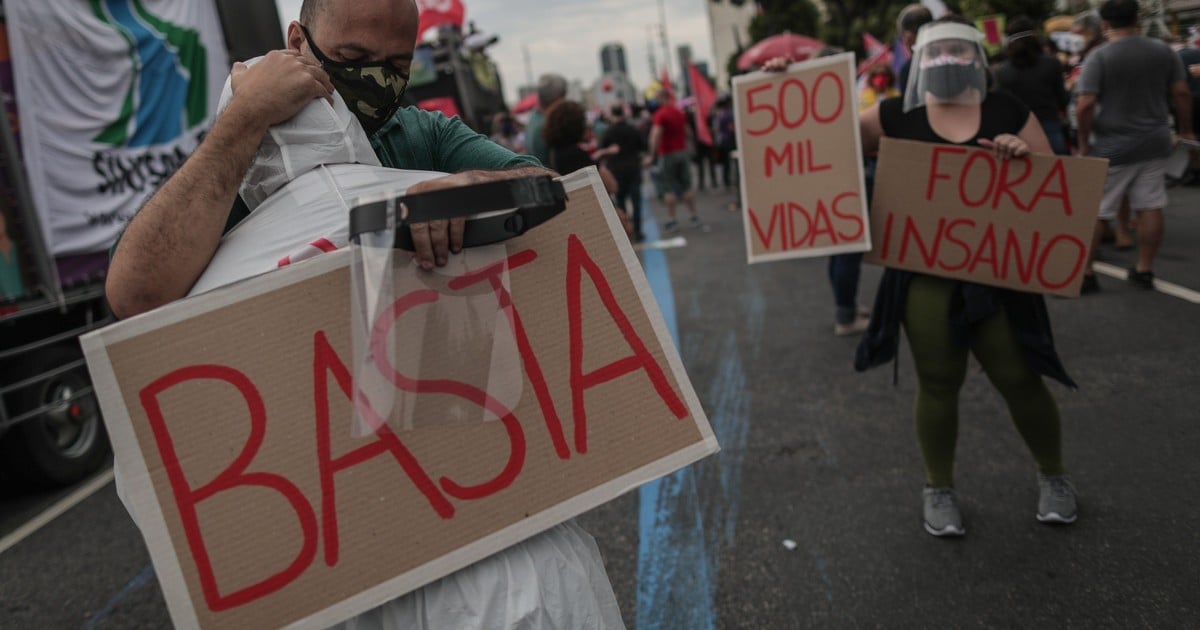 Brazil surpassed this Saturday the barrier of 500 thousand deaths from coronavirus, according to the Minister of Health, Marcelo Queiroga, in a day in which thousands of people took to the streets in different cities to demonstrate against President Jair Bolsonaro.

“500,000 lives lost from the pandemic that affects our Brazil and the world, “the minister tweeted, without specifying the balance of the last 24 hours. As of Friday, his Ministry had recorded 498,499 deaths, with a daily average of more than 2,000 in the last seven days.

According to the Media Consortium (which brings together the main press groups in the country and carries out balances based on reports from regional governments) the total rose to 500,022 deaths in the afternoon.

500 thousand lives lost due to the pandemic that affects us in Brazil all over the world. I work tirelessly to vaccinate all Brazilians in no less than possible time and to move this cenario that devastates us most of a year.

Brazil, with 212 million inhabitants, is the second country to overcome the barrier of 500,000 deaths, after the United States.

The South American country experienced a second wave of the pandemic this year, with balances that came to exceed 4,000 deaths per day, and they exist third wave fears, with a new upturn in the contagion and death curves.

According to the latest weekly report from the Fiocruz Foundation, a leading entity in medical research, Brazil is experiencing a “critical” situation, with “a high plateau (of deaths) and the possibility of an aggravation in the coming weeks, with the arrival of of the austral winter.

Specialists express concern about the slowness of the vaccination campaign, the spread of more aggressive variants of the virus and the president’s positions Jair bolsonaro against the generalization of preventive measures, such as social confinement and the use of masks.

In his tweet, Minister Queiroga assured that he works “tirelessly for vaccinate all Brazilians in the shortest possible time and change this scenario that has plagued us for more than a year. “

Another protest against Bolsonaro in Cuiabá. Photo: EFE.

Meanwhile, in the main cities of the country thousands of people took to the streets again to protest against Bolsonaro, whom They call it “genocidal” for their health policy.

The mobilizations, with thousands of protesters, are registered in Rio de Janeiro, Brasilia, Cuiabá and Recife, among other cities.

Thousands of people, summoned by social movements, unions and opposition political parties, took to the streets shouting “Out with Bolsonaro!”

Protest against Bolsonaro in the streets of Cuiabá. Photo: AP.

The protests are part of the campaign launched by the opposition against Bolsonaro on May 29, and this time new organizations joined the call, such as the Workers’ Party (PT) or the Central Unica de Trabajadores (CUT).

Precisely the leader of the PT, Luiz Inázio Lula da Silva, favorite in the polls for the presidential elections of 2022, wanted to participate in the Sao Paulo march, but his allies have advised him against it to avoid greater crowds.