Brazil already applies a third dose of the Covid vaccine, but millions are still waiting for the second 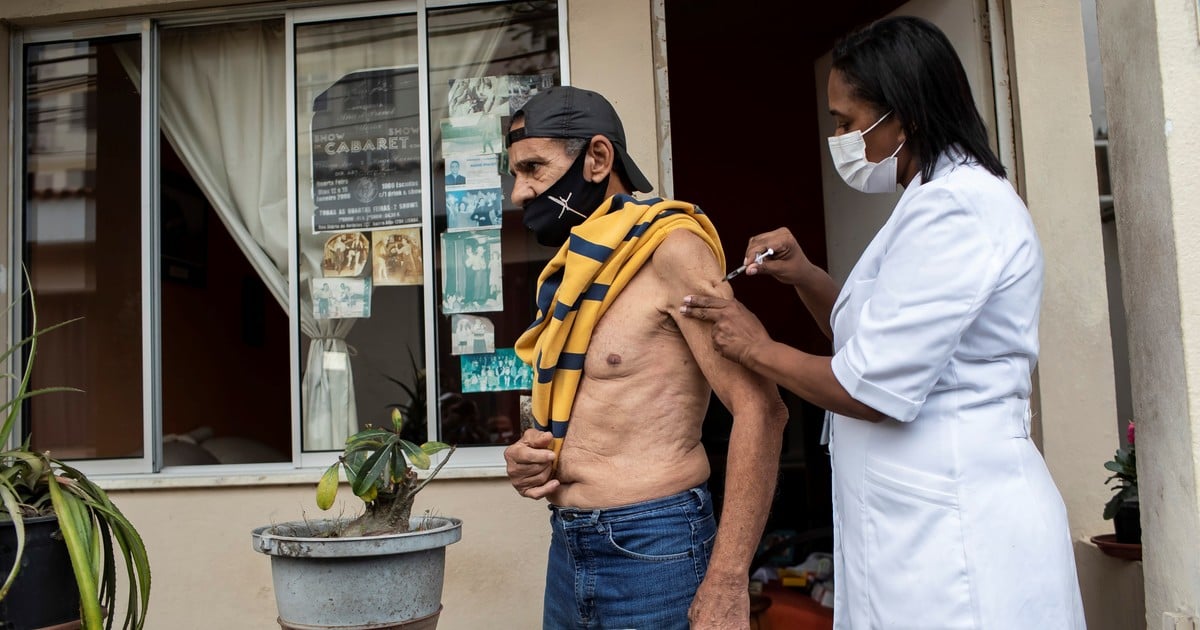 Some cities in Brazil are already administering a third booster dose of the coronavirus vaccine, although the majority of the population did not receive even the second, an indication of the concern that the highly contagious delta variant arouses in the country.

Rio de Janeiro, the epicenter of the latest wave of infections in Brazil and with one of the oldest populations in the country, began administering the reinforcement on Wednesday.

The cities of Salvador and Sao Luis, in the northeast, did so on Monday and the most populated, São Paulo, the new phase of the immunization campaign will start on September 6. The rest of the country will follow in their footsteps the following week.

France, Israel, China and Chile are some of the nations that give the elderly booster doses, but have a higher complete vaccination rate than the 30% who received the initial two injections in Brazil.

The United States’ plan to begin distributing the third dose on Sept. 20 to most of its citizens faces complications that could delay its delivery for those with Moderna, officials said Friday.

About nine out of 10 Brazilians have already been vaccinated or plan to do so, according to pollster Datafolha. Most received the first injection but not the second.

A teenager receives the first dose of the covid vaccine in Rio de Janeiro, days ago. Photo: AP

Older Brazilians expressed concern about the efficacy of the Chinese Sinovac vaccine against the delta variant, prompting authorities to offer the third dose.

The fear of the elderly

Dos Santos, who lives in the humble neighborhood of Maré, is diabetic and was hospitalized for a heart problem, refuses to leave the house until she receives the reinforcement.

“I can’t go out like before and I’m still afraid of all this,” he said. “I will feel more confident (with the third dose).”

The elderly wait to receive a booster of the coronavirus vaccine, in a neighborhood of Rio de Janeiro, Brazil. Photo: AP

Because of the variance, some experts say the government should delay the distribution of the new doses and focus on administering the second ones.

Delta is the most contagious variant identified so far, and many studies have suggested that a single injection offers no protection. Two provide strong protection, and almost all hospitalizations and deaths they occur among the unvaccinated.

Ethel Maciel, epidemiologist and professor at the Espírito Santo Federal University, pointed out that promoting reinforcement at such an early stage is reminiscent of the lack of concern with which the gamma variant that devastated the Amazonian city of Manaus at the beginning of the year was addressed, which then it led to a new wave across the nation.

Since the start of the pandemic, Brazil has registered more than 580,000 deaths from Covid-19, the eighth worst per capita figure in the world.

“It seems that we are in the same movie, repeating the same mistakes,” said Maciel. “It is only a matter of time before what is happening in Rio leads to a greater number of serious cases in the rest of the country,” he added.

The delta variant is already the dominant one in the state of Rio de Janeiro, detected in 86% of the samples of patients with Covid-19, according to the Ministry of Science, Technology and Innovation.

A vaccination center against Covid-19 in Rio de Janeiro, in a July image. Photo: REUTERS

Intensive care units are full in eight municipalities, although mortality has risen very little so far.

The advance of the delta variant

São Paulo state authorities expect a similar scenario in a matter of weeks. He recorded the first confirmed death for the delta variant on Tuesday: a 74-year-old woman who had completed the pattern with Sinovac.

A line to receive the coronavirus vaccine at a stadium in São Paulo. Photo: BLOOMBERG

Doubts about Chinese vaccines have been repeated around the world, especially as the delta variant takes hold in many countries. The Chinese authorities maintain that they are effective against the delta, especially to avoid hospitalizations and serious pictures of the disease.

Despite this, the country’s Health Minister, Marcelo Queiroga, announced on August 25 that those over 70 years of age and those with a weak immune system will be able to request a third dose as of September 15, preferably the one developed by Pfizer. and BioNTech. Those over 18 will have already received the first, although he did not speak of his vulnerability to the virus without a second injection.

Queiroga also criticized the governors and mayors who tried to administer the reinforcement earlier, pointing out that they could contribute to their shortage.

Carla Domingues, former coordinator of Brazil’s national immunization program, agrees with the need to administer an extra dose to the elderly. But he points out that they should first be placed in nursing homes and those who are bedridden, then progressively reducing their age based on availability.

“Certainly there will be shortage problems, because there will not be enough vaccines,” Domingues said.

In addition to the doubts that the extra dose may raise, this is a delicate subject for its implications in the global distribution of vaccines. The director general of the World Health Organization, Tedros Adhanom Ghebreyesus, called for a moratorium “to allow the countries that lag furthest behind to catch up.”

Epidemiologist Denise Garrett, vice president of the Sabin Vaccine Institute, which advocates expanding global access to vaccines, said in an interview that there is no question about the need for the two doses, although she sees no scientific or moral justification for a third.

“Authorities administering a third dose are prioritizing protection against a mild illness rather than protecting people from death in a poor country,” said Garrett, who is Brazilian.

“This is shameful and immoral, and this inequality in vaccines must end,” he remarked.

This does not convince María Menezes, 97, who wants to spend time away from the house where she has lived for the last seven decades in the western region of Rio. His two daughters say that the woman wants the reinforcement.

“She asked us to take her to the third dose,” said her 38-year-old daughter, Cristina França. “It will be important to strengthen your immunity to reduce the risks. Your life will not change much after the third dose, because now it is more fragile, but you will live with more peace of mind,” he concluded.