Braking, stagnation or recession: the fine line to which the Spanish economy appears 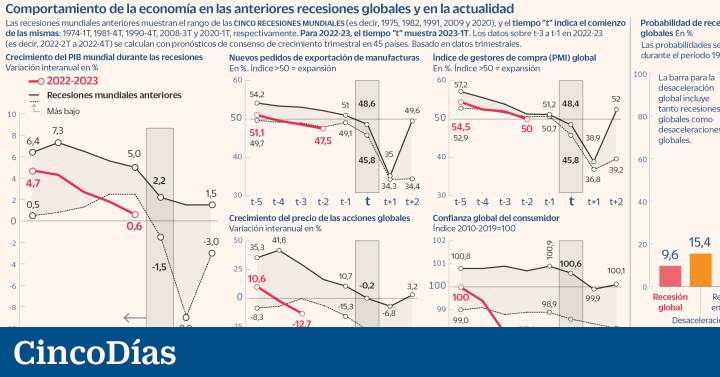 The Spanish economy is trading, like practically the entire Western world, down by 2023. The OECD, CEOE, Santander and the General Council of Economists have lowered forecasts and the Bank of Spain, BBVA and CaixaBank will soon do so. The stage of strong economic growth that was triggered after the Covid pandemic has come to an end: 90% of developed countries have seen their forecasts revised downwards, according to the World Bank.

The war in Ukraine and the consequent crisis in the energy market have generated inflation rates that have forced interest rates to rise. Now it remains to be seen whether this slowdown in growth will degenerate into a recession: two consecutive quarters of contraction in the economy.

World Bank economists warn that all the economic indicators that usually go wrong before recessions are now pointing down. Global growth, manufacturing orders, financial market conditions and consumer confidence. All of these variables point in directions similar to those seen in all recessions since 1970.

At the moment all the OECD economies register year-on-year growth. In a quarterly rate, nine register falls in GDP compared to 29 countries that grow. But, as the World Bank warns, any eventuality, even moderate, could push the economies into a clear recession. The European Commissioner for the Economy, Paolo Gentiloni, considered at the beginning of September that, although the risk of recession is “evident”, this does not mean that it is “inevitable”.

One of the alarm signals, perhaps the most far-reaching, is the US economy. The analyzes carried out by the World Bank based on the recessions of the last half century estimate that if the world’s leading economy shrinks, the chances that the world enters recession soar from 9.6% to 71.4%.

In addition to being the largest importer of goods and services, the US economy is the key to the world’s financial markets. Interest rate hikes in the US increase financial stress in the rest of the world, raising the cost of borrowing.

The country, in fact, has already chained two quarters of GDP declines, -0.6% and -1.6% in the first half of 2022, but the body in charge of determining whether it has fallen into recession, the NBER (National Bureau of Economic Research) has not commented. The Federal Reserve announced last Wednesday that they expected growth in 2022 of 0.2%, a reduction of 1.5 points from the last projections in June.

Greater are the doubts in Spain. At the moment, the Funcas forecast panel, which compiles the consensus of the research services, only projects a quarterly drop in GDP, the fourth (-0.2%), but anticipates a very scant advance of 0.1% for the quarter just ended. The INE will publish its first estimate on October 28. For 2023, experts predict 0.3% between January and March and a gradual improvement from then on, closing the year at 1.9%.

In this sense, the president of BBVA, Carlos Torres, assured at the end of September that the entity expects a “slight” recession in Spain at the beginning of next year in Spain. The question for the end of this year and the beginning of next is, therefore, whether the cooling will translate into recession, stagnation or a simple slowdown. The cooling of the economy, yes, will help curb inflation, as those responsible for monetary policy have recognized.

Oriol Aspachs, director of the Spanish economy at CaixaBank Research, points out that there are two forces that act in opposite directions that can determine the direction of the slowdown. On the one hand, there is the improvement in exports of goods and services abroad, especially tourism, which has picked up at a very good pace this summer; on the other, there are the first signs of weakness in household consumption.

Which of these two forces weighs more can make the difference in the fine line between avoiding a recession or not, although Aspachs warns: “Technical recession can be -0.1% growth for two quarters in a row or -5%. The forecast is for growth to be around 0%, which is why I would call it stagnation or a standstill, not a recession”.

Whether or not there is a recession, what is clear is that there is a key short-term factor on which no government can issue public policies and from which inflationary ills come: energy. In this sense, Spain is not as exposed as the countries of northern Europe to Russian gas cuts. Experts warn that gas will most likely have to be paid more expensive, but there is no risk of rationing, as it does exist in countries like Germany.

The cost of energy is a huge drag on the European locomotive industry. The PMI, the index that measures orders in the manufacturing sector, has fallen from 59.8 points in February to 48.3 in the latest data for September – below 50 points is considered a contraction. The main German economic institutes (Ifo, NRW, IfW and IWH) forecast last week that Germany will register this year a growth of the gross domestic product of 1.4%, but that it will enter a recession in 2023, with a contraction of 0.4 %.

The contagion of European partners is, in fact, one of the great factors of concern for Spain, particularly considering that tourism and external demand have sustained the economy this summer. The foreign sector contributed 4.9 of the 6.8 percentage points that GDP grew in year-on-year terms, and six tenths of the 1.5 points that grew over the previous quarter.

The other big uncertainty is interest rates. The ECB has been raising the price of money to 1.25% since July. The governor of the Bank of Spain, Pablo Hernández de Cos, pointed out that the rise could reach up to 2.5% to curb inflation, with the counterpart of depressing economic activity. The director of the studies service of the Chamber of Spain, Raúl Mínguez, assures that it is important that monetary policy “anchors inflation expectations and ensures that inflationary pressures are reduced in a lasting way.” However, as BBVA Research’s chief economist for Spain, Miguel Cardoso, assures us, “rates of around 2-3% would be acceptable for income.”

Cardoso assures that the drop in activity “is inevitable”. However, the economist believes that the issue is not so much based on growth falling below 0%, since everything indicates that, if there is a recession, it will be controlled (waiting for the evolution of inflation).

The fundamental question, he says, is that the recovery of the economic levels of before the pandemic can be extended towards the end of 2023 or even 2024. “It is not so much what is lost as what we stopped growing without being in this situation Cardoso says. In terms of employment, on the contrary, Spain recovered its pre-pandemic level months ago.

Cardoso is not particularly negative, as he expects the economic slowdown to moderate inflation and take pressure off central bankers. “It will be difficult for companies to transfer a significant part of the increase in costs to prices and for unions to demand full compensation for inflation, with which, most likely, [la caída de actividad] does part of the work for the ECB and does not have to raise interest rates as much.”

BBVA’s Chief Economist for Spain, Miguel Cardoso, assures that we are experiencing a rise in energy prices that will be sustained and that, therefore, we must “get used to being energy efficient as quickly as possible.” “The best way we have to save is realizing that it is a scarce commodity. We have become poorer and it is irresponsible to try to maintain the standard of living with increases in public debt without knowing how much it may cost us in the medium and long term “, he assures. And he concludes that “we should move away from indiscriminate solutions that subsidize consumption regardless of income.”

For the director of the Study Service of the Chamber of Spain, the palliative measures to “cushion” the effects of inflation in households and companies and European funds hold the key to the coming months. “The Next Generation EU funds must play a crucial role in the context of uncertainty,” he says.