Bolivia: thousands of opponents demonstrated against the arrest of Jeanine Áñez 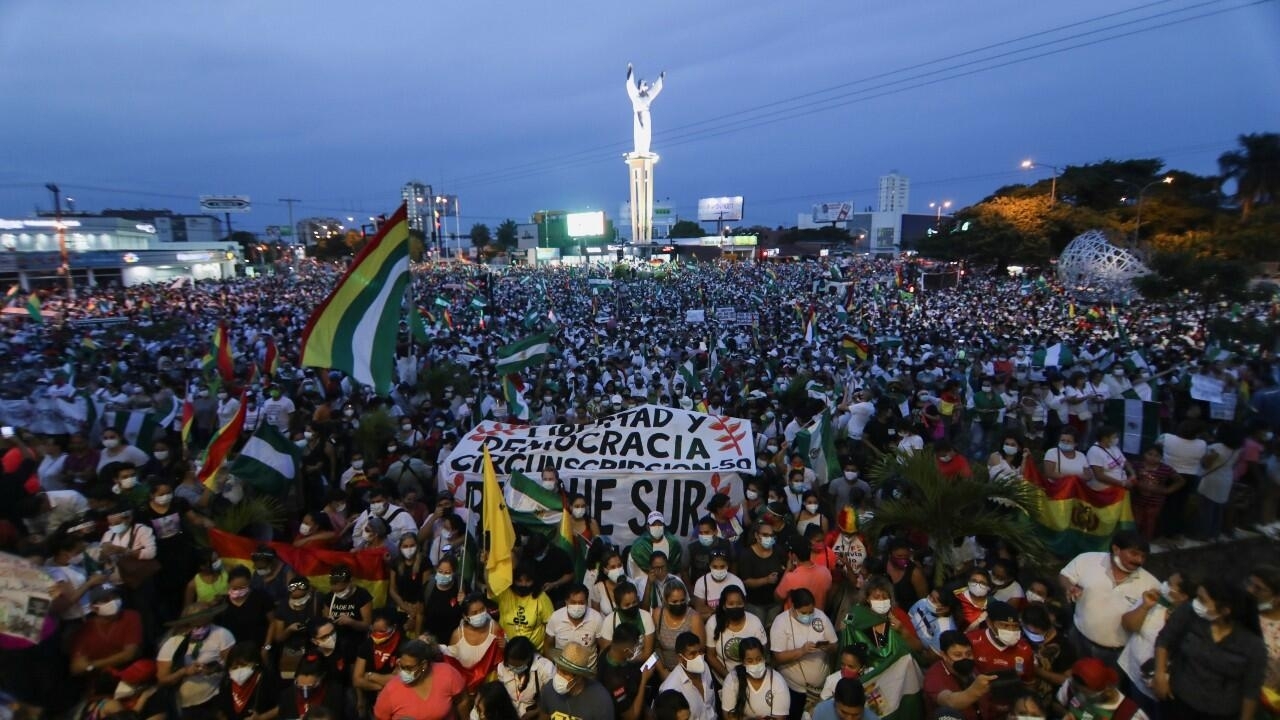 In four cities of the country, several thousand protesters condemned what they consider a “political persecution” by the ruling party against the former interim president and her former Executive. The Movement for Socialism, however, accuses them of having participated in a “coup” against Evo Morales in 2019.

Political polarization in Bolivia is accentuated after several protests last night in different large cities of the country against the arrest of the former interim president, Jeanine Áñez, and two of her former ministers. The ruling party accuses them of having participated in the forced resignation of Evo Morales in 2019, but they maintain that it is a “political persecution”.

The main centers of the marches were the cities of La Paz, Sucre, Cochabamba and Santa Cruz de la Sierra, the latter being where more people concentrated against the Government of Luis Arce, a candidate allied with former President Evo Morales. Santa Cruz is the country’s main conservative stronghold and one of the places where Morales’s MAS has the least support.

Several relevant political actors at the local and regional level participated in the march of this city, such as the mayor and the state governor. In addition, numerous citizen groups also took part. These people promised to offer help to the “prisoners”.

In La Paz, the seat of the country’s legislative and executive power, the marches were under the umbrella of the National Committee for the Defense of Democracy (Conade), one of the organizations that was most active during October 2019 against Evo Morales.

“We are not going to give up, we are going to fight until this criminalization situation that has occurred in the country is reversed,” Conade spokesman Manuel Morales told the EFE news agency.

In Sucre, the constitutional capital and seat of the judiciary, the opposition march reached the building of the State Attorney General’s Office with the aim of protesting the arrest of Jeanine Áñez and Yassir Molina, leader of the so-called Cochala Youth Resistance, a an organization that is considered a “citizen group” by the opposition, but that the ruling party calls paramilitary.

Bolivian justice ordered that for the next four months the former interim president be held in a prison in La Paz awaiting trial by the court on duty for the events of 2019.

Áñez was transferred under a strong police guard to the Obrajes Feminine Orientation Center while the pertinent investigations of the so-called “coup d’état case” are being carried out.

The general director of the Prison Regime in Bolivia, Juan Carlos Limpias, told EFE that Áñez will receive constant health monitoring for the next 15 days due to the coronavirus crisis and that after that he will be assigned one of the 13 common dormitories in the prison for more than 200 prisoners. The official emphasized that “no person deprived of liberty has privileges in this center.”

Áñez is accused, along with the former Minister of Justice, Álvaro Coímbra and the Minister of Energy, Rodrigo Guzmán, of “sedition, terrorism and conspiracy” in the crisis of 2019 that led to the forced resignation of Evo Morales in November of that year.

There is controversy among opponents because Áñez is being tried as a former senator and not as a former president of the country. If politics were judged by this second route, it would have a special regime of responsibilities.

The Organization of American States (OAS) called for the release of all the detainees and assured that there is a “judicial persecution against opposition politicians.”

For his part, former President Morales said on Twitter that he was not surprised that the Secretary General of the OAS, Luis Almagro, defends Áñez because “he should also be tried for promoting the coup d’état and for crimes against humanity in Bolivia.” .

Almagro never spoke for the 36 murders, more than 800 wounded, 1,500 illegally detained and the hundred persecuted. We are not surprised by his defense of Áñez because he should also be tried for promoting the coup d’état and for crimes against humanity in #Bolivia.

During those weeks of 2019, the opposition joined in accusations against the leftist leader that claimed that he had carried out electoral fraud to win the elections. The protests reached the streets, where thousands of people confronted the authorities demanding the resignation of the president. In addition, they assured that Morales had already exceeded the number of periods to which he could appear.

Morales resigned along with the senior staff of the Movement for Socialism after having suffered pressure and the military commanders withdrew their support and left the country. But after this, in 2020 elections were held again in Bolivia and the MAS won a landslide victory with 55% of the votes at the national level, something that helped legitimize the leftist party in the international community.

They appointed Milagro Sala's lawyer to the Human Rights secretariat

Blue dollar today: how much it is trading at this Sunday, March 14