Bobinas Blancas Case: ‘They killed me with laughter in the face,’ said the prosecutor who remembered a Chespirito sketch during the debate 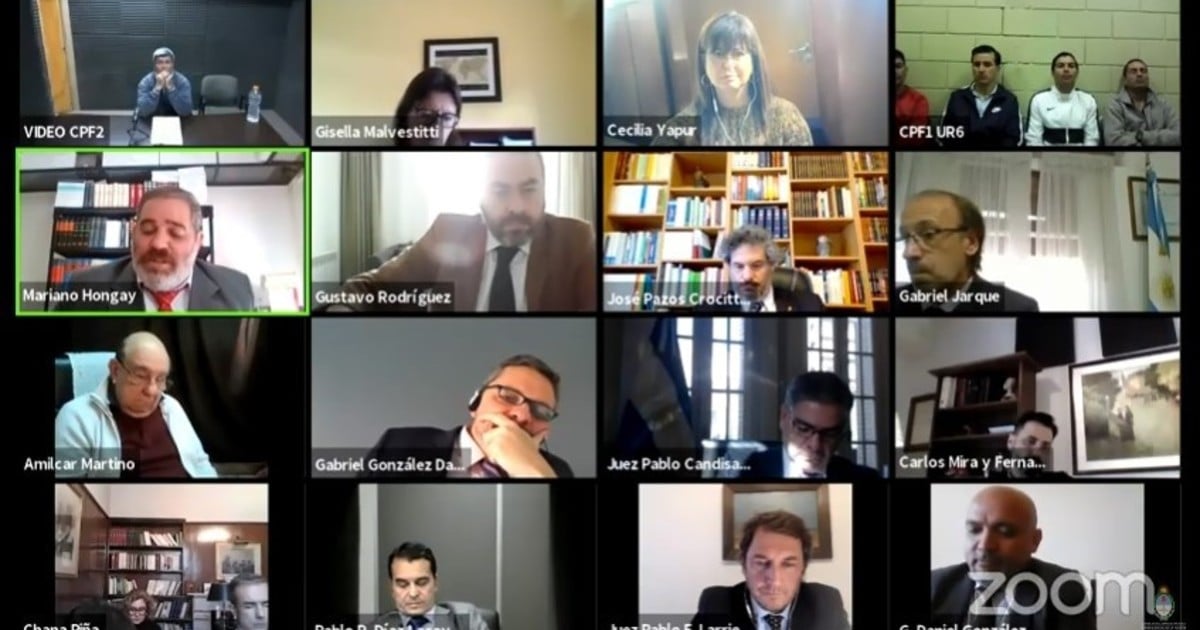 “Yes, I chose it and what a stir it caused.” The federal prosecutor Gabriel González Da Silva thus defended his appeal to a Chespirito sketch, in an attempt to distort the arguments of the defense of Emmanuel García (41), one of those tried in the Bobinas Blancas case. The accuser even cited an academic work on the contribution of the work of Roberto Gómez Bolaños, to support his position.

He did so by responding to the questioning made by another trial lawyer, in the final stage of replies to the debate started at the end of March by the Federal Oral Criminal Court of Bahía Blanca. González Da Silva dedicated a large part of his presentation on Friday to answering the official defender who assists Darío Cuello (33) and one of García’s lawyers.

Guillermo Pazos Crocitto had asked González Da Silva to put on “a show” with his plea, in which, in addition to the Mexican series from the 1970s, he alluded to other television and film strips. He cited Narcos, El Robo del Siglo and the tense moment between Pappo and a DJ, when the late rocker asked him to find “a decent job.”

The same was suggested by the prosecutor to García, whom he accuses of launder money originated in drug trafficking through the use of bitcoins, after the broker sought to disengage from the disbanded gang in mid-2017. García denied knowing the name of the person who only knows his nickname “Licenciado” and that, according to the accusation, it would be the drug lord who operated from Mexico.

“I knew him perfectly and long before this began,” said the prosecutor, who recalled a dialogue between Garcia with the “Licenciado” or “Vic”, whom, according to the defendant, he did not ask for identification, as he did with other clients, to start operating. After consulting him on what he should call it, he received in response, “Just tell me, Bachelor.”

There González Da Silva recalled that the same phrase was said by one character to another, “coincidentally Mexicans,” he remarked, in the famous Televisa program. “The same thing happened here. ‘Tell me, Graduate. Graduated, ‘Garcia replied and that’s how it was for life. If he does not know the name, I think he knows it and does not disclose it, “the prosecutor had commented.

“I did not do it to show off or make fun of myself as Pazos Crocitto and García’s lawyers said,” González Da Silva defended himself. “It was to show the ridiculousness of which they wanted us to believe that to a person, who was only known as the Bachelor, García gave him, through unknown third parties, thousands and thousands of dollars in exchange for cryptocurrencies of highly doubtful and illicit proven origin ”, he argued.

He added that his allusion to the gag met the “clear language” requirement required of prosecutors in the charter of the Public Ministry and sought to be understood by all, including the Mexicans accused. “It is a crass mistake to belittle the culture that that television program left us,” he added, citing the research Resonances del Chavo del Ocho in Childhood, Education and Latin American Society, published by the Latin American Council of Social Sciences (CLACSO).

“No one can come to question CLACSO,” he said about the 2020 work in which they participated, as editors, anthropologists, psychologists and sociologists. “The show that doctor Pazos Crocitto imputed to me is the one that he displayed and he has us used to in each trial,” added the prosecutor, who acts as a surrogate before the same Bahia court where the official defender works.

Both Cuello’s defender and those who assist Garcia, pointed them out for attacking only “satellite issues” of the trial. “Faced with the probative orphanage for the defense, they preferred to ridicule and demonize my allegation, making incursions into personal allusions,” remarked the prosecutor who based his reply on the fact that they sought to cast doubt on its objectivity, a potential cause for nullity

In addition, González Silva expressed his annoyance before the judges at the behavior of some of the defenders during the presentation of his allegation and that of the plaintiff lawyers Mariano Hongay and Daniel González, who represent the AFIP. “They laughed at me in the face,” he complained.

He asked President Pablo Díaz Lacava, attentive to the provisions of the Criminal Procedure Code, not to allow grimaces or other similar expressions. “During the presentation of the lawyer Hongay, I focused on the little squares of the defenders and each statement, followed a manifestation of laughter or disapproval,” observed the prosecutor about the transmission that is made via Zoom.

On the contrary, he highlighted the conduct of the three Mexicans accused during the debate. “They behaved like true gentlemen, always sitting in their place, despite hearing heavy and harsh accusations but without a single lack of respect,” he said about Max Rodríguez Córdoba (48), Jesús Madrigal Vargas (33) and Gilberto Acevedo Villanueva (33).

“It is another society, another culture, another humility that we unfortunately do not have. We Argentines were like that, but now we have no respect for any authority or investiture ”, he reflected. For Rodríguez Córdova, the prosecutor asked for 15 years in prison and 14 for the other two. All admitted their participation in the band at the beginning of the hearings and are still in prison.

Together with the plaintiffs, the prosecutor rejected the nullity proposals presented by García’s defense, made by lawyers Roxana Piña and Sebastián Leborgeois. They had argued that the principles of consistency and defense in court were violated, among others, because the accusation against the broker mutated during the investigation and in the same debate.

The prosecutor also described as “weak”, the request made by the official defender Gabriel Jarque, against the note of the DEA that opened the way for the investigation. According to Acevedo Villanueva’s advisor, the letter sent in March 2017 to the Federal Police had a level of “precision and detail” that would denote a previous investigation, not accredited in the file.

“If the DEA had intervened, they would have left everything on a platter,” the prosecutor refuted and stressed that some of the elements provided by the US antinarcotics agency were corroborated but others were discarded.

Although he admitted that without that note “the cause falls”, he ruled out irregularities in its use and described Jarque’s arguments as “light”.

Mexicans are identified as co-perpetrators of the crime of drug marketing. Cuello, who is free, and his brother Marcelo Rafael (47), are considered necessary participants and the prosecutor requested sentences of 5 and 6 years in prison, respectively. The same sanction as the oldest of the Mendoza, requested Amílcar Martino (61). Both were released by the court on Friday.

In García’s case, free but unable to leave the country, the prosecution considers five operations with bitcoins in exchange for dollars originated in drug trafficking to be proven and asks the court to sentence him, as the author of money laundering, to 8 years in prison. For the AFIP, there were eight confirmed transactions and they raised the penalty request to 9 years.

The trial went to a new interim room until after the judicial fair. At the hearing convened for August 9, prosecutor González Da Silva will continue with his reply. He has yet to allude to other questions from García’s defense, who accused him of using the tactic of Josef Goebbels, head of Nazi propaganda.