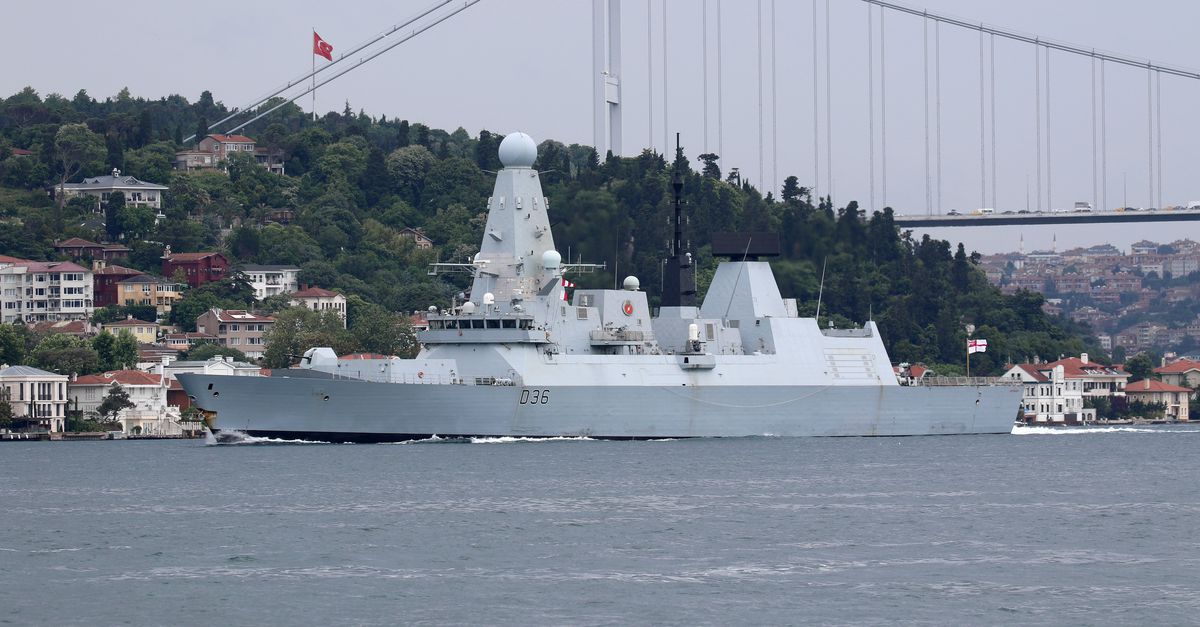 The Russian Defense Ministry claims on Wednesday it fired warning shots at the British naval vessel HMS Defender, because it entered territorial waters near Crimea three kilometers despite an earlier warning. Russian media reported extensively on Wednesday about the Defender, which is said to have been chased away with bombs by the Black Sea fleet. But according to the British Royal Navy sailed the naval vessel on internationally recognized routes from Odesa to Georgia, and was shadowed on that route “as is routine” by Russian vessels. The crew would have been informed of Russian exercises in nearby waters. “No warning shots were fired in front of HMS Defender,” said the spokesperson from the Ministry of Defense, which denies having been “chased away” or “deterred,” descriptions used by Moscow.

Remarkably reports a BBC reporter, at the invitation of the navy aboard the ship, that the frigate was indeed dealing with Russian forces. About 20 planes flew over the Defender, according to defense journalist Jonathan Beale. The Defender’s location may have provided grounds for the Russian military response, which states that the British ship was in Russian waters. The British, on the other hand, maintain that they have complied with international law and have also chosen a route “through Ukrainian waters”.

That stark difference stems from the conflict over Crimea, the peninsula claimed by both Russia and Ukraine and annexed by Russia in 2014. Defense Secretary Ben Wallace spoke of an “innocent passage” by the British ship – a maritime law principle that allows ships to traverse territorial waters – Moscow saw as a “blatant provocation”.

Sailing through the disputed waters was “a deliberate move by the Royal Navy towards Georgia,” according to BBC journalist Beale. The Russians placed the Defender three kilometers in its own coastal waters off Cape Fiolent, about 13 kilometers south of Sevastopol in Crimea, Interfax quoted.

HMS Defender is part of Carrier Strike Group 21, a multinational fleet that now escorts the aircraft carrier HMS Queen Elisabeth en route to Japan via the Mediterranean Sea and the Suez Canal. A number of ships from that group were repulsed, including an American warship. The HMS Defender moored this week at the Ukrainian port city of Odessa, together with the Dutch frigate Zr. Ms. Evertsen. In the aftermath of Russian coverage of the Black Sea incident, confusion arose about the exact location of these warships, and information that can be found about them via public trackers. Published in a Wednesday Weekly overview Defense operations writes the Royal Netherlands Navy that “Zr.Ms. Evertsen patrolled the Black Sea”.

A spokesperson for the Royal Netherlands Navy tells Wednesday evening NRC that the British and Dutch ships are both in the Black Sea on Wednesday evening, but “not very close to each other. The Defender will go to Georgia, the Evertsen will sail to Romania this weekend”. According to him, the two ships were also far enough away at the time of “the alleged incident” that Evertsen was not involved in the incident. “But we endorse the response of the British,” he says, referring, among other things, to the reading that the Defender was in Ukrainian – not Russian – waters.

Last week Moscow also complained about the HMS Defender and the Zr. Ms. Evertsen. The ships’ so-called AIS identification system showed an overnight journey from Odessa to Sevastopol, the largest Russian-owned port in Crimea. The Royal Navy then allowed to know the website navalships.nl that there was a fake signal and that both ships had remained in Odessa.

It is currently busy in the Black Sea, where NATO member states and some allies are working towards a large-scale naval exercise, a series of maneuvers called ‘Sea Breeze 2021’. Ukraine is hosting the exercises, which are due to start next Monday. Russia, which is not only at loggerheads with Ukraine over Crimea but also very at odds with NATO, is not happy with this exercise so close.