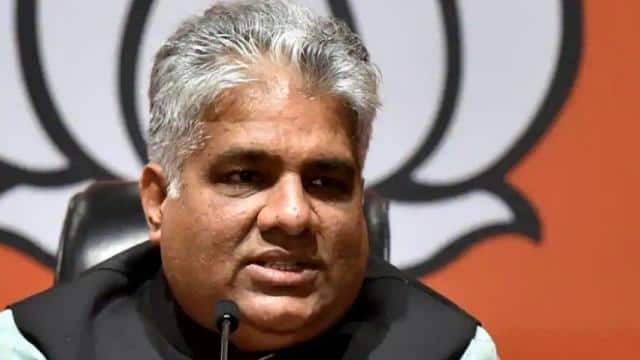 Despite splitting from the NDA over the Bihar assembly elections, the dispute between LJP and BJP is increasing. The allegation between BJP leaders and Chirag Paswan is increasing. Meanwhile, today i.e. on Saturday, BJP has once again made it clear that LJP is not an NDA ally in Bihar elections.

BJP is very clear, LJP is not a part of our alliance. We want to tell Chirag Paswan that he should not harbor an illusion. BJP-JD (U) are fighting the election and Nitish Kumar ji will be the Chief Minister: Bhupender Yadav, BJP # BiharElections2020 pic.twitter.com/2fEhRG2w2x

Bhupendra Yadav on the occasion of launching BJP’s e-Kamal newsletter and election campaign video in Patna said that BJP is very clear in this matter that LJP is no longer part of our alliance. We want to clearly tell Chirag Paswan that he should not be under any illusion. BJP-JDU is contesting elections and Nitish Kumar will be the chief minister.

Bhupendra Yadav said that soon Chirag’s lies will be exposed. It is clear that LJP is not included in the NDA. The leader of the NDA is Nitish Kumar. At the same time, we have contenders for the post of Chief Minister. Lok Janshakti Party is contesting separate elections. NDA has nothing to do with that.

Let us tell you that earlier, Union Minister Prakash Javadekar and Bihar Deputy CM Sushil Modi also attacked LJP President and said that LJP was just a voter party. Javedkar said that ‘Chirag Paswan has chosen a different route in Bihar. They are misleading people by naming the big leaders of BJP. We do not have any B and C teams. NDA is going to get a three-fourth majority in Bihar. Chirag Paswan’s LJP bus will remain as a voter party. ‘

Earlier on Thursday, BJP leader Sushil Modi said that there is no deal between LJP and BJP. These kinds of things are being publicized, but even then people have their own interests. Modi said that LJP is like a vote-cutting party. If he is not part of any alliance, then his strength is not to win more than two-three seats. The Deputy CM also appealed to the people not to waste their vote by voting for LJP candidates.

Chirag retaliated by asking questions
On Saturday, LJP President Chirag Paswan said in response to the statement by BJP leader and Union Minister Prakash Javadekar that I did not expect such a statement from him. Chirag said in a conversation with Aaj Tak channel that BJP leaders are making such statements under pressure from Bihar Chief Minister Nitish Kumar. Chirag instructed that BJP leaders use their discretion. Earlier, he had claimed that BJP and LJP government would be formed in Bihar. Railways has run some more festival special trains, here is their list

Curfew: small towns are not spared