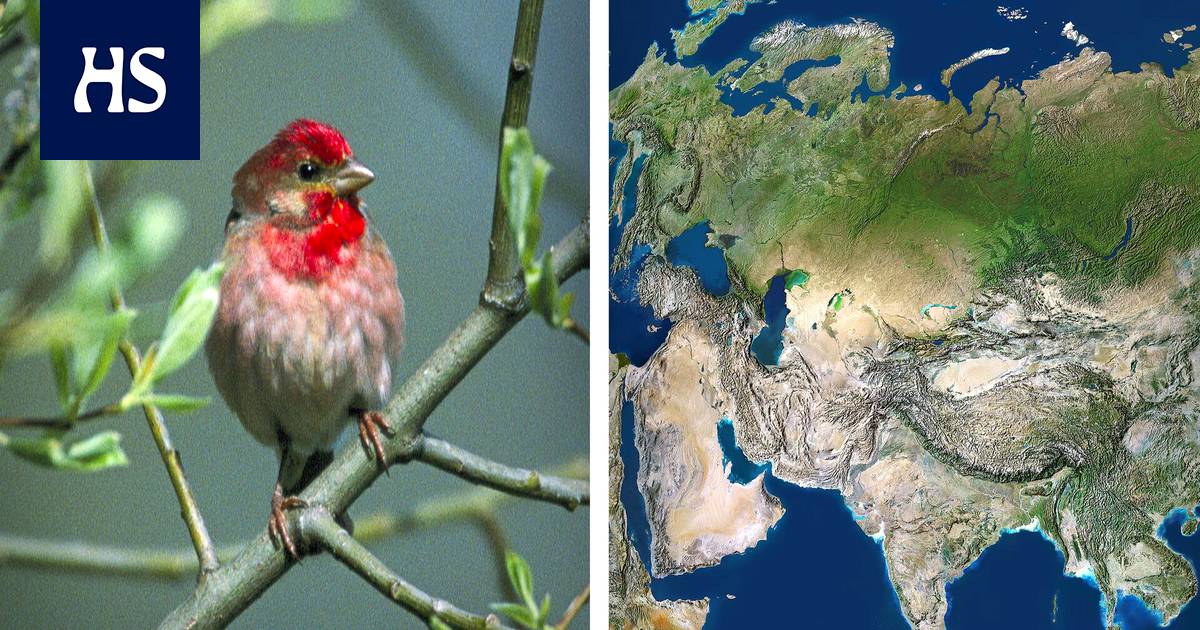 Desert, large waters and mountains hit the journey of birds migrating to the east.

In May an attentive outdoor enthusiast can hear a song in the bush, the rhythm of which sounds like the singer saying “nice to meet you” in English.

The red sparrow has arrived in its nesting areas. The little bird comes here for the summer from the Far East, but the stages of its migration have been largely covered in twilight.

Now the secrets of the Red Sparrow’s journey have been revealed in a European research project.

The researchers installed geologgers, or tiny backpacks, on Finnish, Swedish, German, Czech, and Bulgarian red-sparrows, which store information about the birds’ journey.

They also mathematically modeled the wind conditions of migratory routes and things important to birds, such as vegetation, food, and water.

Majority Long-distance migratory birds nesting in Europe move south to Africa for the winter. Part of the journey east, to the Indian subcontinent. The red sparrow is one of these species.

The Caspian Sea and the Black Sea, among others, flow between the red sparrow nesting and wintering areas.

There are deserts such as Dasht-e Lut in Iran, Karakum in Turkmenistan and Thar on the Indian-Pakistani border, as well as mountains such as the Caucasus, the Zagros Mountains from eastern Turkey to Iran, the Elburs in Iran and the Hindu Kush in the Himalayas.

Migration routes circulate the highest mountains, the driest deserts and the widest waters. Therefore, bottlenecks arise along the way, with a large number of birds crammed into the same narrow channel to avoid crossing awkward areas.

Such places exist, for example, on the isthmuses of water bodies and in narrow straits. On the route of migratory birds to Africa, one major bottleneck forms in the Strait of Gibraltar.

Birds have a variety of ways to influence their arrival time.

However, the itinerary is not only guided by the shapes of the terrain, but also by birds, food, a suitable environment, resting places and winds.

Even the European red-spotted rides do not rumble on the most direct road between East and West, but make a wide variety of choices along the way.

Climate affect how and when birds migrate. Climate change has clearly brought spring forward, and at the same time many birds have moved earlier.

Birds have a variety of ways to influence their arrival time. Some species set off earlier than before, others feel the situation along the way and linger on the voyage according to the circumstances.

Some will tip closer to the nesting area in good time and rush to their destination quickly as soon as the weather allows.

A geologger mounted on the back of the Red Sparrow collects information about the migration route.­Picture: William Velmala

Part however, species are unable to adapt their migratory behavior to adapt to new conditions as well as others.

It is much more difficult for long-distance migrants to schedule their arrival at a convenient time.

Because the wintering and nesting areas are far apart, it is difficult to know the situation in the target area from the starting area. Still, even long-distance migrants can file their spring arrival by delaying or picking up speed along the way.

All birds with loggers from a recent study migrated to India and Pakistan. Finnish birds stayed for the winter in the northern part of the area.

Some of the birds folded their way wildly quickly, while others were in no hurry of any kind. The travel time of birds varied between 10 and 70 days in autumn migration and between 22 and 56 days in spring migration.

In the spring, the busiest started their journey as early as the end of March, and even the latest procrastinators set off during April.

The earliest emigrants were individuals nesting further south in Europe, in whose nesting area spring is even earlier than in the native lands of relatives nesting in the north.

The red sparrows seem to have a different migration strategy at different times of the year.

All The European red sparrows did not travel the same distance from east to west.

Bulgarian birds migrated in the autumn from the southern Caspian and Black Seas. The other red sparrows, on the other hand, traveled far north of these waters.

In the spring, the Finnish and Swedish bird routes again passed from the northern side of the Caspian Sea, but clearly further south and more straightforward than in the autumn, almost beveling the shore. The spring route of birds nesting further south in Europe was not the same as in autumn.

In autumn the winds are favorable on a broad front. However, areas good in terms of vegetation, food and protection are clearly divided into two northern and southern alternatives.

In the autumn, the birds made their choice on the latter grounds. Further north, nesting birds traveled for resources on the northern route and southern Bulgarian birds on the southern route. None went in the middle.

In the spring, birds, in turn, seemed to favor routes with the best wind conditions, and, assisted by the winds, flew a straighter line than in the fall.

The red sparrows thus seem to have a different change strategy at different times of the year: in the autumn the energy supply goes ahead and in the spring the speed brought by the winds is appreciated.

No one knows why the luck of the red sparrows turned.

With red sparrows went well in the first half of the 20th century. They expanded their habitat in Europe and inhabited new areas in the central and northern parts of the continent.

The European red sparrow population still increased a few decades ago, but then they slowly began to decline. At present, the species is classified in Finland as endangered.

No one knows why the happiness of the red sparrows turned and where the downturn began. The reasons can be found in nesting areas, wintering areas and along the way.

Although the nesting areas of the red sparrows changed, for the winter the birds still traveled to the old familiar areas of the Indian subcontinent.

Geologists the material collected reveals an interesting detail about the journey of Czech red sparrows. The Czech birds made a brisk bend on their way for no apparent reason and joined the same route with their fellow nesting species further north.

The Czech sparrows only inhabited the Czech Republic at a fairly late stage, in the 1960s and 1970s. European red sparrows are possibly of two different origins: the birds that nest in Bulgaria are perhaps of Turkish origin, and further north they nest in Russia.

Thus, Czech birds may have come from Russia, a population accustomed to migrating along northern routes.

During their short history, the Czech Red Sparrows may not have had time to adjust their migration behavior to an optimal level, but continue to strive for the traditional route used by their ancestors.