BioNTech co-founders: “This vaccine is just the beginning” 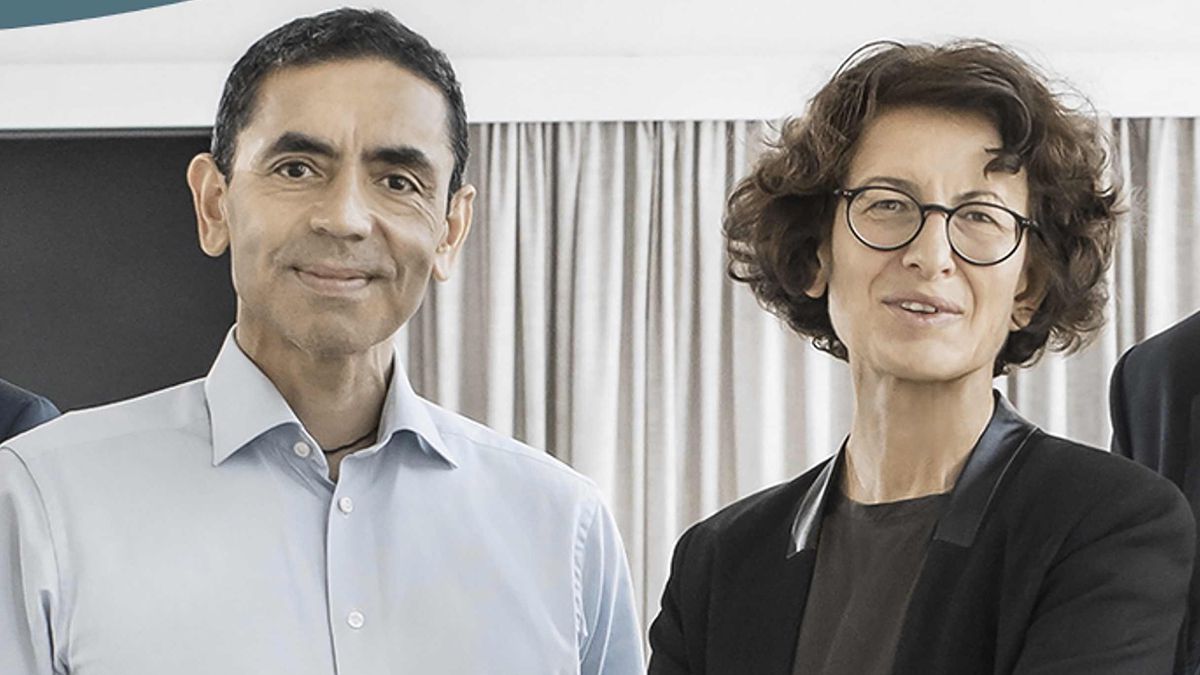 Dr. Özlem Türeci (Lastrup, Germany, 54 years old) and Dr. Uğur Şahin (Iskenderun, Turkey, 55), co-founders of the German company BioNTech, argue that the success in the development of messenger RNA vaccines against covid-19 is “Transnational”, and that opens the doors to new types of vaccines against other infectious diseases, as well as against cancer. The vaccine developed by this marriage of scientists and produced with the Pfizer company, is one of those that are being used around the world to fight against covid. “This vaccine is just the beginning,” they say.

Question. Pfizer / BioNTech’s coronavirus vaccine is the first approved for commercial use to have messenger RNA [una especie de instrucciones para fabricar una proteína que desencadena la respuesta inmunitaria] . Has this year fundamentally changed the way vaccines will be developed in the future?

Uğur Şahin: The case of covid-19 really shows some of the advantages that mRNA vaccines offer. The first is that it has been the development [de vacunas] fastest in all medical history. This is often one of the fundamental advantages of mRNA vaccines: they can be manufactured in short production runs and clinical trials could begin in just a few weeks. The second is that the data clearly show that the method is not only the fastest, but also the most effective in inducing not only immune responses. [respuestas de anticuerpos y células T] but also to prevent symptomatic disease. The new data obtained [de la vacunación en la población general] they also show their effectiveness in preventing infection, something important in controlling the pandemic. And the third is that we are seeing that technology, which has never been used for global use before, has made it possible to apply vaccines to many, millions of people. We plan to manufacture 2 billion doses by the end of this year. And this is just the beginning. This is mRNA 1.0. The proof of concept for a new class of drugs.

P. Now that you have managed to develop an mRNA vaccine, is it a matter of simply introducing RNA sequences from other viruses or pathogens to create new vaccines? What other infectious diseases do you have in mind?

Özlem Türeci: Right now that’s one of the important questions, more specifically, how to prioritize all opportunities. The procedures that we have followed until obtaining a conditional authorization to commercialize the vaccine against covid-19 has allowed us to establish the technology for all phases of clinical development and the regulatory procedure.

In principle, there are many other cases of infectious diseases and pathogens in which we would simply have to cut the sequence of the covid-19 protein S and insert the genetic information of an antigen from another virus or pathogen in the same mRNA vector, and then basically repeating what we’ve done. And the flu is the most imminent, because we are already working on it. But we have two other indications of infectious diseases (such as tuberculosis) in which we have already started pre-clinical work and are already compiling the following list.

P. They mentioned that they had already started working on a flu vaccine before last year. Why has the covid-19 vaccine developed so quickly, in comparison?

OT We did not begin collaborating with Pfizer on the development of the flu vaccine until 2018, and we were in the early preclinical phase of work when the pandemic broke out. So I wouldn’t say the flu is much slower.

What happens is that, in the case of covid-19, we were in a global pandemic, which caused the world’s attention and resources to focus on it; all stakeholders, including regulatory authorities and clinical networks, had a strong interest. The processes for starting human studies first or conducting large trials, which typically take months due to long wait times, have accelerated.

Now, when we get back to our work on influenza, we will be able to take advantage of all the advantages that mRNA brings in terms of short manufacturing cycles, to adapt it to seasonal variants and all the other aspects.

P. Initially, they began to study mRNA vaccines as a way to treat cancer. Why?

OT Uğur and I are doctors, and we have treated cancer patients. We are also immunologists, and we are fascinated by the immune system. So we wonder how we could meet a medical need that current care methods cannot meet. We immediately thought of using immune therapies and activating the immune system.

US: We have been working with mRNA for more than 20 years. The reason we started was our idea to create individualized cancer therapies, based on the observation that tumor antigens, cancer cell antigens, which are recognized by T cells [del sistema inmunitario] they are unique to each cancer patient.

We understood that future therapy could focus on analyzing the patient’s tumor and discovering which antigens would be suitable, and then producing a vaccine based on this information. And that idea requires the right technology, a technology that allows us to induce an immune response against any type of tumor antigen in a powerful way and that can be manufactured in a few weeks, because the cancer, of course, could be growing.

When we started out, we looked at DNA, vector vaccines, peptides, recombinant proteins, everything that has been tried before as possible vaccine technology. But then we tested the mRNA and realized that it could be really powerful. We saw that mRNA could be expressed in dendritic cells, which are the key cells for inducing an immune response. And that was one of the deciding factors, along with the ability to make the vaccine quickly. And that’s why we started developing mRNA vaccines.

P. Was moving the focus to infectious diseases a big leap?

OT When we started, many years ago, we were very clear that we had to study the immune system to be able to redirect it against cancer.

The immune system has developed mechanisms to protect and defend itself against pathogens such as viruses. RNA viruses are the oldest, which meant that even though we worked on cancer for so many years, we had to understand the mechanisms of the immune system, which originally targeted viruses, and also develop methods to mobilize different effectors of the virus. immune system [células que llevan a cabo respuestas inmunitarias] against an antigen. We had to profoundly improve the potency of mRNA vaccines, because it is very difficult to develop strong immune responses against the autoantigens of cancer cells.

“The immune system has developed mechanisms to protect and defend itself against pathogens such as viruses. RNA viruses are the oldest ”

And so, once we had all this (the knowledge of the immune system), the fact of using it to use it for what was originally intended by nature, that is, protection against viruses, was not a huge leap.

US The fundamental principle is the same: it is about designing an antigen and transporting it to dendritic cells to induce an immune response.

P. Were you surprised when you saw in clinical trials that your vaccine was 95% effective against COVID-19?

OT When we start [en enero de 2020]We didn’t know much about the biology of the virus. Our goal was to obtain an ideal immune response, and we knew how to tweak our vaccine to achieve that response. So when we gathered the data from the phase I trial, it was clear to us that we had achieved our goal.

However, what we did not know was how effective this immune response could be. The efficiencies of traditional vaccines are generally, and typically in the case of influenza vaccines, between 50% and 70%. 95% was a very positive surprise.

P. As vaccination campaigns accelerate, we get more data on efficacy, effect on transmission, safety, and so on. What are you especially looking for in that data?

We have already shown in our clinical trial that our vaccine works, regardless of gender or age. But in a clinical trial we cannot include all subpopulations – such as immunosuppressed patients, or patients with kidney disease who undergo regular hemodialysis – with sample sizes that allow us to draw conclusions. We will obtain this with studies on general vaccination, and it will help us to understand at what levels and what subsets of the population the vaccine protects.

P. The goal is to achieve group immunity.

US At the moment, one of the challenges is that people think “this is new and I am skeptical, I would like to receive a traditional vaccine”. But it is very likely that a change will occur quickly, as we have data. We will continue to explain how these mRNA vaccines work. In less than a year, we have published eight articles about the covid-19 vaccine. And some more will come.

P. Do you think that one day all vaccines will be mRNA?

OZ I think we can say that we believe that mRNA vaccines will bring about a transformation. We clearly see an era of mRNA vaccines ahead. However, there are limits where, due to the biology of the corresponding pathogen, the mRNA is not the proper format.

US At this time, mRNA vaccines cannot deliver bacterial carbohydrate antigens. So all pneumococcal vaccines [que ayudan a proteger contra las bacterias causantes de neumonía o de meningitis, por ejemplo] where these carbohydrates are really needed they cannot be synthesized by mRNA. No type of antigen design that cannot be encoded by mRNA, which the human cell translates into proteins, can be addressed by an mRNA vaccine. So we believe there will continue to be room for other vaccines.

P. At the beginning of your work, you received EU funding for basic research. How useful has it been?

US Funding from the EU, and also from the German state, allowed us to generate in-depth scientific knowledge on the recognition of cancer by the immune system. The grants have also made it possible to finance the first research phases of our mRNA vaccine. It helped us improve our vaccines and generate preclinical and clinical data on our specific individualized mRNA cancer vaccine method. The results obtained from these projects helped us find investors who believed in our idea. Pharmaceutical development of new drugs is very expensive, and compared to the funding we raise, mostly in the form of venture capital, the amount we receive from the EU is negligible. However, it is important to understand that innovation development is a cumulative process. The clinical results that we have generated with these mRNA vaccines raise new questions and will open up new areas of research.

This article It was originally published in English at Horizon, the EU research and innovation magazine. The research for this article was funded by the EU.

Impressive: in Nepal they carry out open-air cremations for unmanageable outbreak of Covid-19