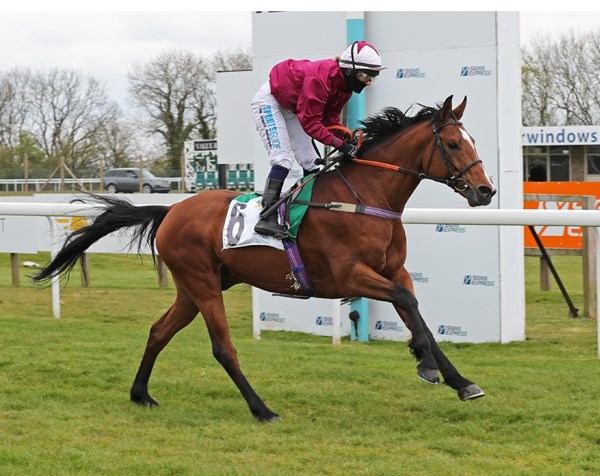 Dubai (Union)
The horse “Bin Al-Reeh” presented to Sheikha Maryam Bint Maktoum Al Maktoum, a brilliant performance in which he showed his superior skills, to be crowned champion of the second race of the Al Wathba Stallions Cup on the British arena, which was held on Monday at the grassy Bath track. The Al Wathba Cup Stallions series of races is held under the guidance and support of His Highness Sheikh Mansour bin Zayed Al Nahyan, Deputy Prime Minister and Minister of Presidential Affairs, with the aim of supporting and spreading purebred Arabian horse races in Europe and America under the auspices of His Highness’ World Festival. The champion horse, Sophie Ralston, under the supervision of trainer Pete Hamersley, led the race for horses four years old and above rated (0 to 70) for a distance of 1,600 meters, with the participation of 8 horses who competed for the prize money of £ 4,000. “Bin Al-Reeh”, descended from the descendants of “Al-Wind South”, started from the seventh gate, and soon led the race early, and in the depth of the straight line the horses competed dramatically, before the champion and his steward “Jamarat” were distinguished from the rest of the competition horses by a large and clear difference. And after extraordinary effort and fierce competition, “Ben Al-Reeh” was able to outpace the “Jamarat” of Shadwell’s stables, under the supervision of trainer Philip Collington and jockey Jim Crowley, who gave a good offer and indication that she will be the star of the future. “Bin Al-Reeh” scored a time of 1:51:98 minutes, while it came in third place, a difference of 9.5 length from the second place owner, the horse “Zain Zebrion” of the Zain Arabian Horse Farm, under the supervision of Bait Hammerslay, and led by Joy Hines. The Irish Knight Ralston said that she participated in many thoroughbred Arabian horse races around the world, but this was my first victory, and therefore it will be a memory for me. ” Pete Hammersley was pleased with all his horses and said: “I have said before that I do not think that Wolverhampton on the sandy track suited Ben the Wind in his previous participation, and that running on grass proved this point.” The festival is supported and sponsored by the Department of Culture and Tourism and the Abu Dhabi Sports Council The National Archives is the main partner, Etisalat the official partner, Wataniya Feed the strategic partner, Emirates Airlines is the official carrier, and also sponsors Al Masoud – Nissan, Areej Al Amirat, Amir bin Youssef Travel, Yas Channel, the General Women’s Union, the Supreme Council for Motherhood and Childhood, Viola Company, and Club Abu Dhabi Equestrian Society, and the Emirates Arabian Horse Society.

The definitive vaccine against malaria, a little less far