Bill and Melinda Gates, the distribution of a fortune of more than 130,000 million 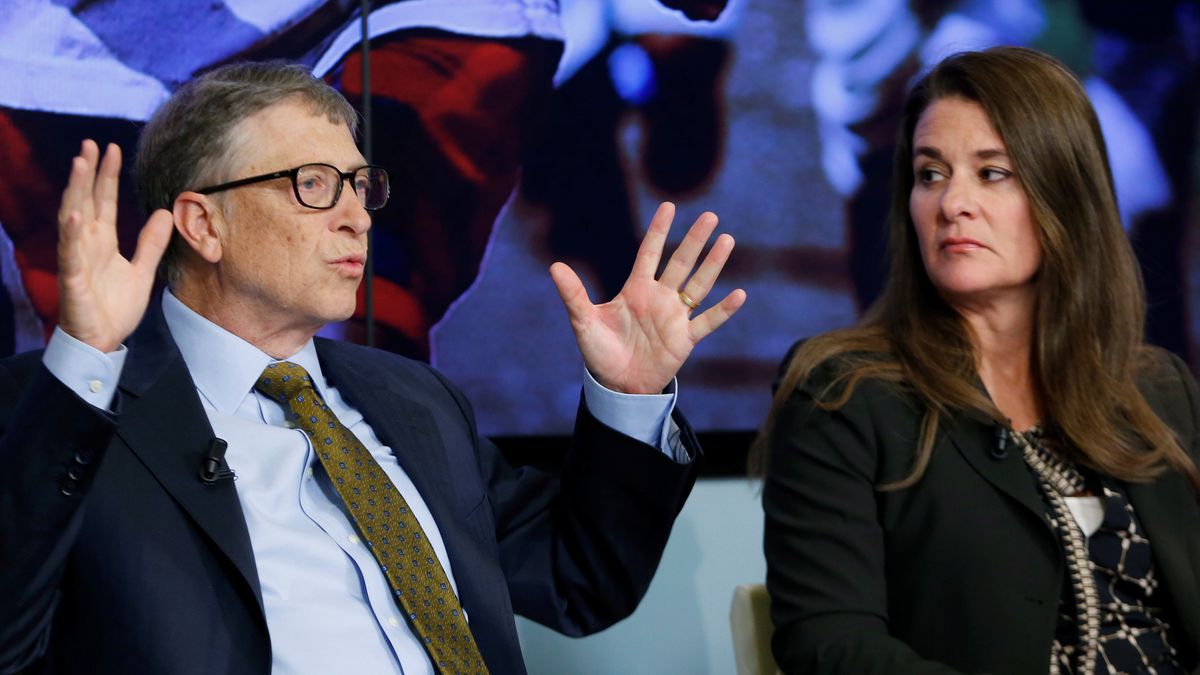 Bill and Melinda Gates issued a joint statement on Monday announcing their divorce after 27 years of marriage. How could it be otherwise, they did it using their Twitter accounts, a technological medium for those who revolutionized the world with the creation of Microsoft, the company of software larger, and the Windows operating system. The news, beyond the sentimental and personal significance it has for its protagonists and their three children —Jennifer, Rory and Phoebe, aged 25, 21 and 18 respectively—, has become a global milestone with repercussions and interpretations in the main media. Not surprisingly, Bill Gates, 65, is the fourth richest man, with a fortune that Forbes estimated at more than 130,000 million dollars (more than 108,000 million euros), and as a couple they preside over the Bill and Melinda Gates Foundation that they created in 2000 and has become the largest private charitable foundation in the world. In fact, this same magazine proclaims Melinda Gates, 56, “the most powerful woman in philanthropy,” a place where she has made a name for herself.

After the announcement of their divorce, in which they consider their marriage “irretrievably broken”, questions begin about the consequences of this separation that also has economic repercussions, since the court documents presented by the couple reveal that they did not sign any prenuptial agreement when they married in 1994. The Foundation created by both, which manages a fund of 50,000 million dollars with which they have helped causes such as the eradication of polio and malaria and, in this last year, research on treatments for the coronavirus, it seems that it will continue its activity regardless of the personal relationship of its founders. At least that is how they have taken it upon themselves to announce it in their statement: “Over the past 27 years, we have raised three incredible children and built a foundation that works around the world to enable all people to lead healthy and productive lives. We continue to share our belief in that mission and we will continue our work together at the foundation, but we no longer believe that we can grow together as a couple in this next phase of our lives. “

However, few have doubts that both will have planned the broad features of their separation agreement prior to the announcement of the same, especially if one takes into account that, as Melinda Gates said, the one who will soon be her ex-husband weighed On a chalkboard the pros and cons of your marriage before asking her to marry him. According to an information published by the British newspaper Daily Mail, the Gates would have done much of this work of dividing up their assets before filing the court papers to file for their divorce. In these documents there are multiple references to a “separation contract” that both have signed. A contract that has not been made public but in which they have supposedly reached agreements on the division of their assets that includes properties in five United States, a private plane, an important art collection and a fleet of luxury vehicles.

When Bill Gates married Melinda, he was already accumulating a great fortune. He had founded Microsoft in 1975 and by 1987, when he was only 31 years old, he had become the youngest billionaire in the world. Melinda, for her part, was a brilliant student at school who from a young age showed interest in volunteer activities. In 1987, after studying Computer Science and Economics and an MBA from Duke University, he joined Microsoft as a product manager, where he developed multimedia products, such as the Expedia website, and information products, such as the Encarta encyclopedia. In 1996, two years after marrying Bill Gates, she left the company to focus on philanthropic work around the world. According to an article published by Forbes, her role in the foundation’s strategy has been gaining ground and becoming more visible and is highly focused on global challenges such as education, poverty, contraception, women’s and girls’ rights, and health. In 2015 Melinda founded Pivotal Ventures, a company that, according to the company’s website, finances “transformational ideas, people, and organizations that advance the social progress of women and families in the United States.” And in 2016 he participated in the creation of the Maverick Collective, a global community of philanthropists. In 2019 he wrote the book The moment of lift (There is no going back) in which she remembers all the “inspiring women” she has met around the world and explains how she became an advocate for women’s rights.

Over the years in which they have formed a couple, they have acquired several houses together, the most important of them a mansion facing the sea that they called Xanadú 2.0, located in Medina, Washington, and that has more than 6,000 square meters, a property that according to the King County appraisal office was valued at 130.88 million dollars in 2020. In April of the same year the couple, as reported Los Angeles Times, bought a new $ 43 million home in Del Mar, California. Although Bill Gates resigned as president of Microsoft in 2014, he still owns 1.34% of the company, according to Forbes, and also has shares in the brand integration and advertising company, Branded Entertainment Network, and is the president of TerraPower, a nuclear reactor design company, according to Investopedia. Melinda Gates’ individual net worth has not been publicly disclosed, and according to the divorce documents she has filed in court, she is not requesting any type of support for herself or her children, but that her “contract of separation”. A private contract that will divide the real estate of the couple, their personal property and the debts or responsibilities that both spouses have.

According to economic media, Bill Gates has surprised many shareholders by making important movements in their investments. The shares of AliBaba and Uber have been divested and these holdings have disappeared from the portfolio of the Bill and Melinda Gates Foundation. It has also sold 50% of its shares in Apple, Amazon and Alphabet, technologies that have fallen on the stock market in recent weeks and has decreased its participation in companies such as Tesla, Spotify, Zoom, Baidu, Teladoc or Shopify.

Some movements that, in the opinion of the specialized press, respond more to his vision of what is going to happen in the economy in the near future than to his divorce process. In this sense, it should be remembered that during the presentation of his book How to avoid climate disasterGates said that he is preparing for a major global economic crisis and that he specified it will be “similar to 2008”, although he did not dare to give an exact date of when it will happen.

Bill and Melinda Gates, together with investor Warren Buffett, devised in 2010 the Giving Pledge initiative, It was joined by 40 millionaire individuals and families who pledged to give most of their wealth “to address some of society’s most pressing problems.” Originally the initiative focused on the United States, but in 2013 the commitment went global and it was joined by signatories from different countries such as Australia, India, Germany, Malaysia, Russia, South Africa, Ukraine and the United Kingdom. Today it brings together 200 of the richest people, couples and families in the world.

April continues to reduce the unemployment list in the Region with 2,629 fewer unemployed

Carnage: the crimes committed by the symbiote in the comics

Russia Niinistö says that he talked a lot about Navalny with Putin: “I raised the issue of whether outside doctors have the opportunity to review the situation.”