After the Second World War, the “original” Nazis or more or less futuristic neo-Nazi groups were often chosen as antagonists in fictional works, and in Japanese entertainment and fiction this tradition has also consolidated. We have several famous examples, both in animation, as in Black Lagoon, both in manga like JoJo’s Bizarre Adventure: Battle Tendency And Neun. Osamu Tezuka he is one of the authors who often inserts very direct references to Nazism, in works such as The Three Adolfs, Osaka 1945, and also the manga we’re going to talk about today, that is Big X, shonen series published from 1963 and 1966. As always, Big X is one of the latest entries in JPOP’s Osamushi Collection.

We reviewed Big X via press volume provided to us by J-POP Manga.

The narrative opens with the brilliant scientist Dr. Asagumo, who in a Japan allied with Germany in World War II he is invited by Adolf Hitler himself to work on a super secret project together with Doctor Engel, the Big X: a final weapon, a substance that should be able to create super soldiers with which Nazi Germany can conquer the whole world. Tezuka, however, does not change the outcome of the conflict: Dr. Asagumo, realizing the destructive power of this weapon, tries to stall and hide it from the eyes of the Nazis who, without the Big X, will lose the war leading to the consequences that we all know. And yet, the completed project has not been lost: Asagumo will entrust it to his son Shigeru and then to his nephew, Akira, who will have to protect him from the Nazi League, a kind of paramilitary organization spread all over the world and born from the ashes of the original German party, which still plans to resurrect the Reich. This is perfectly exemplified in the figure of Hans Engel, a real nemesis of Akira, as the grandson of the original Dr. Engel, who blames the Japanese family for the loss of the war, and especially the death of his grandfather.

The story, which oscillates between simple superhero storytelling for children and science fiction apart from the “serious” incipit, it follows a bit the classic tones of the manga of the time and in some places recalls works like Astro Boy, with a somewhat plastered structure and “daughter of its time”, where there are no major plot changes except the occasional betrayal of the secondary character on duty: through increasingly complex and absurd plans, even bringing out mecha and weapons of mass destruction, the League and Akira fight on many fronts but, in the end, good always wins, thanks to the power of the Big X used for good purposes instead of evil, in clashes that by now, accustomed as we are to a certain type of action, seem really childish and almost funny.

A compelling but linear story

The plot of Big X, outlined in the previous paragraph, is really simple and the premise may make you smile today, but at the time Japan had lost the Second World War a little less than twenty years ago, and the American occupation was over for just nine years. Still the scars of the conflict were strong in the Japanese people, which is double if we are dealing with authors who have always been opposed to totalitarianisms, just like Tezuka, who was well ahead on this. The 1960s were somehow the period in which Tezuka seemed to be a divinity, capable of churning out series after series with infinite creativity: the same Astro Boy would have continued until 1968. But we are still somehow at the dawn of the manga, when everything could somehow be new and still had to consolidate i topoi of the paper medium.

And somehow, Big X seems to take a lot from the landscape of the era, with Incredibly thrilling and exhilarating battles (plus some definitely raw scenes), but also very formulaic and discounted, as well as unlikely, with the Nazi League which in this case appears to be practically the strongest entity on Earth, capable of creating giant robots, training entire guerrillas and continuing to chase Akira across the globe. Graphically, even Tezuka’s style is the same we are used to, that is still rather cartoonish, with curved and slender lines and a violence, albeit real and capable of really killing one’s characters, somehow so extreme as to be funny. , a bit like Tom and Jerry still taking baseball bats on the head. 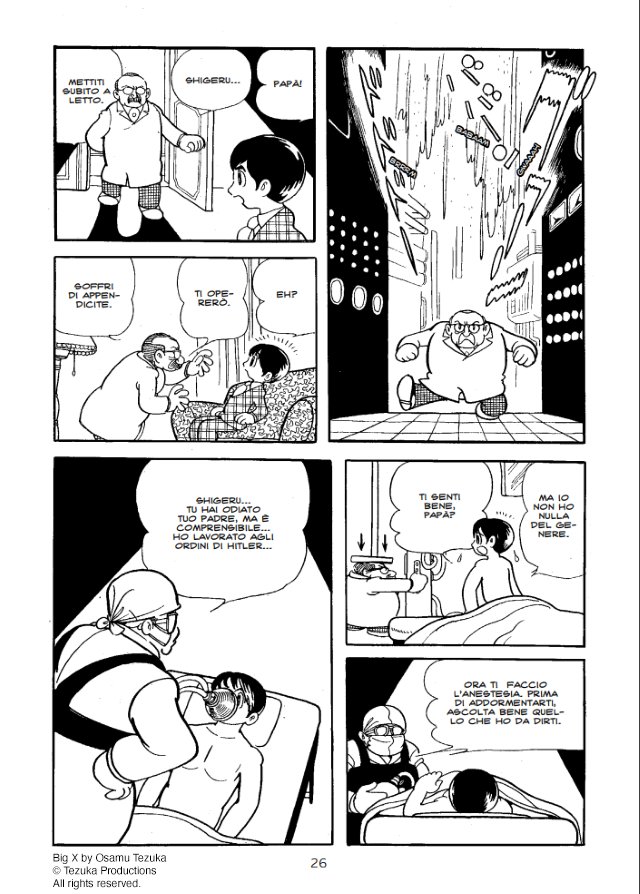 Dr. Asagumo is invited to Germany to collaborate with the Reich in the search for a new weapon, the Big X. Worried about the possible effects of this instrument, he manages to delay its progress until the end of the war. Twenty years later, in Japan, a neo-Nazi organization recovers the Big X project and brings it to fruition, revealing its essence: a drug capable of expanding the human body without limitations. It will be up to Asagumo’s nephew, Akira, to hire him and defend the company from the machinations of the wicked.

Regarding the edition of J-POP we have very little to say: is perfectly in line with the other manga of the Osamushi Collection. Same artwork for the cover, but decidedly unfortunate choice to portray Akira as the main figure under the effect of the Big X; the comic proportions make this dust jacket look, unfortunately, truly hideous. The price is also the same as the standards we are used to for the volumes of this series, which is always between 14 and 15 euros. In general, I would recommend this manga mainly to those who already appreciate the author and are used to his ups and downs, considering how much these can vary between one series and another: in any case, another historical work in some Modo restored by J-POP is, as always, a commendable initiative, for an author who is certainly still too little known here in Italy.

Not the best of Tezuka’s works, but still more than enough

In conclusion, Big X represents a bit the dualism of the author capable of timeless classics as simply “sufficient” series, which do the homework but do not surprise too much: unfortunately, Big X is certainly one of the less incisive ones, far from timeless masterpieces such as Astro Boy, The Scalpel and the Sword or Black Jack, or to stay on the subject of shorter volumes, MW, Kirihito or The Sapphire Princess. And yet, it “lets itself be read” without too many problems, like an early action series dedicated to school-age kids, but don’t expect anything narratively innovative or complex. Recommended mainly for those who already love Tezuka like myself and want to add another work to their collection, while there are several other manga (even by the same author!) Able to tell a story with similar themes, but performed in a better way.

Recommended for those who already love the author

Steel or aluminum ?: The scope of the possibilities

Internet, smartphone and social boom in the post-pandemic