Biden warns of inaction in the face of Corona 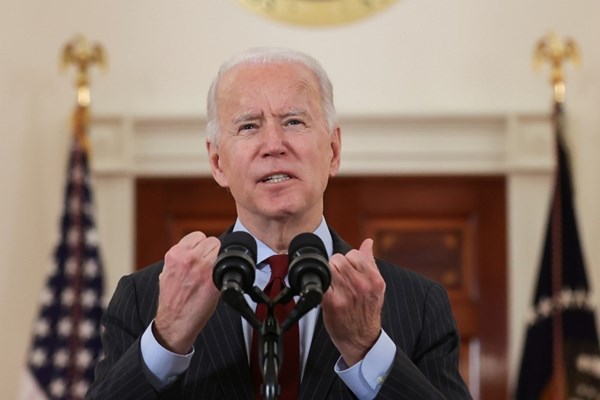 With the number of Corona virus deaths in the United States reaching half a million, US President Joe Biden warned against complacency in the face of the Corona pandemic, in an event to mourn the victims.
Biden said: “We have to resist the feeling of apathy because of sadness … We must resist looking at every life in terms of statistics or vagueness.”

“We should do this to honor the dead. But caring for the living is just as important,” he added.
After that speech, Biden, first lady Jill Biden, Vice President Kamala Harris, and her husband Douglas Imhoff observed a minute of silence on the south side of the White House as several candles were lit.
The total number of coronavirus-related deaths in the United States reached more than 500,000 on Monday, according to data compiled by Johns Hopkins University.

The White House said in a statement: “This is more Americans who have died in one year due to this pandemic than the number of victims of World War I, World War II and the Vietnam War combined.”

The statement added, “On this solemn occasion, we are thinking of losing them and the loved ones who were left behind. We as a nation must remember them so that we can begin to coalesce, unite and find a goal as a nation to defeat this pandemic.”
The United States reached this huge number of deaths at a time when President Joe Biden’s administration is trying to intensify efforts to vaccinate more people against the deadly virus.

A total of 64.2 million doses of the Coronavirus vaccine were given in the United States, according to the Centers for Disease Control and Prevention’s Vaccination Tracker website.

The Biden administration aims to vaccinate at least 100 million people in its first 100 days in office.
The United States, with a population of about 330 million, has recorded more than 28 million confirmed cases of the virus so far.
Biden had earlier ordered the US flag to be flown at half-mast over government buildings, military bases and all diplomatic missions abroad, for five days.

A player from Villa Dálmine, in serious condition after being stabbed in a bar