“Biden is the most knowledgeable US president in Brazil,” says Ambassador Todd Chapman 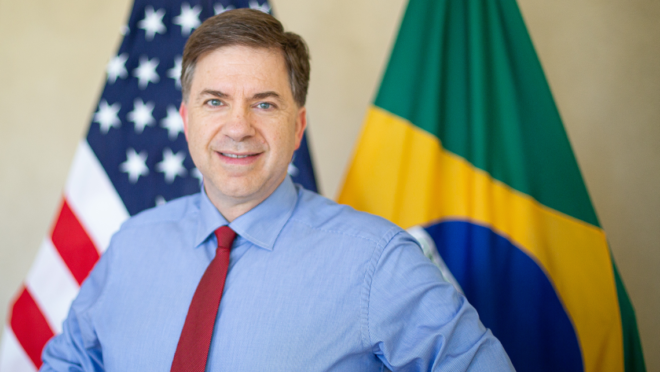 0
SHARES
3
VIEWS
Share on FacebookShare on Twitter
The US Ambassador to Brazil, Todd Chapman| Photo: Publicity / US Embassy and Consulates in Brazil

The US ambassador to Brazil, Todd Chapman, recently announced that he is retiring from public service after a 30-year career at the US Department of State. He has been ambassador to Brazil since March 2020, but his history with the country is longer, as he moved with his family here in 1974, when he was 11 years old, and spent 12 years of his life in Brazilian lands.

As a diplomat, Chapman has worked in eight countries in Latin America, Africa and Asia, serving under six US presidents, three Republicans and three Democrats.

Before returning to his homeland to live in Denver, Colorado, closer to his two children, the ambassador continues to fulfill diplomatic commitments. On a visit to Paraná this week, he met with Governor Ratinho Junior to talk about the areas in which the US government and the state government have cooperation, such as trade, the environment and public safety.

During a visit to Curitiba, the ambassador spoke with the People’s Gazette and the RPC on the main points of the relationship between Brazil and the United States:

The US government announced in early June a plan to globally donate at least 80 million doses of Covid-19 vaccines. This includes a specific plan for 25 million doses in a first step, with 6 million of them destined for Latin America.

Brazil will benefit through the Covax Facility consortium, coordinated by the World Health Organization (WHO). The White House explained that at least 75% of the total doses will be shared by Covax and the rest will be donated directly to countries in need. However, the US has not yet informed exactly how the distribution of units will be for each country.

“We are working with the Brazilian authorities to carry out this donation,” said Chapman, without giving details on the amount of doses or the date on which they will arrive in Brazil. “I hope that within a few days we can receive a significant amount of vaccines here in the country.”

Environmental and climate issues have also been the focus of cooperation between the two countries. “The theme of the environment is very important not only for Brazil and the US, but for the world, at this time when we have to take concrete actions to reduce the influence of man on the environment”, points out the ambassador, adding that two countries hold frequent meetings to address the issue, and the fight against illegal deforestation has received special attention at the moment.

“Of course, it is a sovereign decision for each country, how they will implement their policies. We would like to see these initiatives perhaps with more attention to the illegalities that are taking place in the Amazon.”

In the environmental area, the US government has had programs for years to help economic development in the Amazon region, among others, and is considering increasing the budget in this area to invest in initiatives to combat deforestation or to solve the fire situation, for example.

The ambassador also said that he would like to see more private sector initiatives in this area. “It is the big business, and here it is agribusiness, which are most impacted by climate change,” he stated.

Brazilian flag on the moon

This week Brazil signed a cooperation agreement for the Artemis mission, from NASA, the American space agency. This program intends to resume manned flights to the moon and take the first woman to the terrestrial satellite. The Brazilian nation is the first in Latin America to adhere to the Artemis Agreements, which establish rules for the exploration of the Moon.

Another ten countries, in addition to Brazil and the USA, are already on the list of those who will participate in the mission: Australia, Canada, South Korea, United Arab Emirates, Italy, Japan, Luxembourg, New Zealand, United Kingdom and Ukraine. The first trip to the Moon of the Artemis program must be made by American crew, and the following ones may have the participation of astronauts from other countries.

“I am very excited to think about seeing the Brazilian flag alongside the US flag on the Moon. This is a relationship without limits; beyond the Earth”, celebrates Chapman, who attended the signing ceremony of the agreement in Brasília on Tuesday (15).

Another area that has received special attention from the US is the security of 5G telecommunications technology. Washington has led efforts to curb China’s ambitions to contract 5G network infrastructure with other countries out of concerns over the Chinese government’s possible use of the technology as a base for espionage and cyber attacks.

“It’s important that you can trust the telecommunications you have, and it’s important to decide who you trust,” says Chapman. “At this time when many countries, regrettably, have the practice of stealing intellectual property and cyber crimes occur, it is very important for economic and national security to be able to rely on the telecommunications that their economy will be based on.”

On his first international trip as president, Joe Biden met with leaders of the G7 and the North Atlantic Treaty Organization (NATO), and gained allied support in his campaign to lobby China for abusive trade practices and violations of human rights.

Chapman called the G7 meeting “a good start” and its results “promising”. “I think President Biden came in with his own perspective on the importance of allies working together, reaching agreements and implementing those agreements together,” he said.

Building bridges between Brazil and the USA

President Jair Bolsonaro’s government had a close relationship with the Trump government. But the change in administration at the White House does not necessarily mean a turning point in the relationship between Brazil and the US.

“The vast majority of relations between nations are institutional, not personal. But it is clear that personal relations can also help a lot to reach agreements and understandings”, emphasizes the ambassador.

Joe Biden visited Brazil twice while he was vice president, in 2011 and 2014, when he was received by Chapman. “I think he is the president who has more knowledge about Brazil than anyone else in our history, because he has visited the country twice and has really invested in this relationship,” says the diplomat. “President Biden understands the importance of Brazil for Latin America and for the world. Now is the time to create more bridges and more areas of convergence”, he points out.