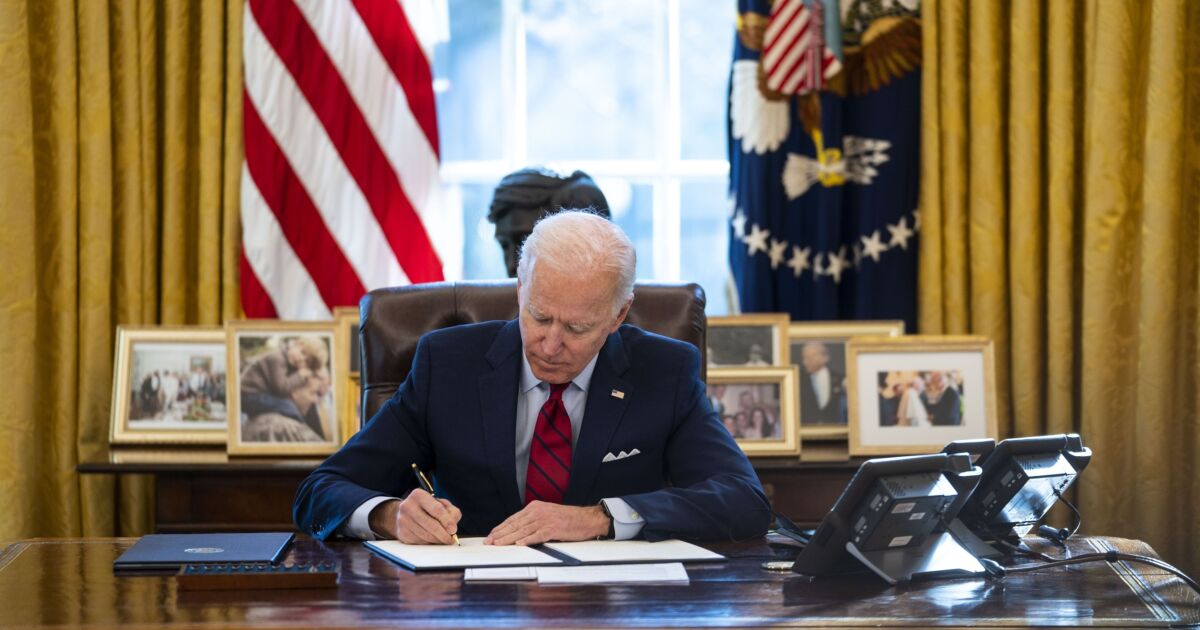 President Biden is encouraging the Justice Department and federal regulators to tighten their scrutiny of bank mergers just as new deals are picking up.

The move, announced Friday, is part of a broader executive order meant to promote competition across the US economy, including in sectors such as healthcare, technology and agriculture. The order also has implications for the growing policy debates over consumer data privacy and data portability.

In the banking industry, the White House is taking on a consolidation frenzy that has resulted in scores of closures. Federal agencies have not formally denied a bank merger in more than 15 years, according to a White House statement.

Biden is prodding the DOJ, the Federal Reserve, Federal Deposit Insurance Corp., and the Office of the Comptroller of the Currency to update their guidelines “to provide more robust scrutiny of mergers.”

Increased scrutiny could slow a renewal in dealmaking that has been spurred by greater economic certainty coming out of the COVID-19 pandemic. Banks are poised next week to report more releases of capital reserves that had been stockpiled for potential loan losses during the downturn, fueling the prospect for more deals, according to analysts and M&A experts.

There were 26 bank M&A deals announced in June, the busiest month since September 2019, according to S&P Global Market Intelligence data.

“If I were in the industry, I wouldn’t want to be the first one out of the gate with a big transaction with the Biden regulators coming in,” Jeremy Kress, assistant professor of business law at the University of Michigan, said in an interview prior to the White House announcement.

Branch closures that result from M&A deals can reduce small business lending by about 10% and lead to higher borrowing costs, the White House said in its statement. Closures in rural areas disproportionately affect communities of color, it noted.

Some in the banking industry criticized the White House’s focus on mergers involving financial institutions, arguing that banking is one of the US economy’s most competitive sectors.

“By any analysis, banking is among the most competitive, least concentrated industries in America, as anyone who has shopped for a credit card, mortgage or deposit account knows,” the Bank Policy Institute, which represents many of the nation’s largest banks, said in a statement.

The trade group called on federal regulators to focus their antitrust reform efforts on recognizing the competition posed by fintech challenger firms and other nonbanks, rather than between banks themselves.

“Banks continue to lose business to unregulated fintechs or government-sponsored enterprises, whose presence in the market current DOJ guidelines inexplicably ignore in assessing market competition,” the trade group wrote. “Those guidelines should be amended to reflect the underlying law.”

But Jaret Seiberg, a financial analyst for Cowen Washington Research Group, argued that the financial services industry should not expect to bear the brunt of the executive order. “This is not aimed at financial services,” he wrote in a research note.

Seiberg said that while the order is unlikely to have much of an impact on community and regional banks, it may lead to headaches for the country’s largest financial institutions.

“This could cause trouble for mega banks trying to acquire other financial businesses as the question will be whether the resulting consolidation gives the acquirer too much power,” Seiberg said.

He argued that the bigger risk to bank M&A activity involves Biden’s upcoming choices to lead federal banking agencies. Fed Gov. Lael Brainard, who is expected to take a larger role at the central bank, recently questioned the approval of PNC Financial Services’ deal to acquire the US unit of BBVA, saying that a review of the approval process was needed.

will be opening on the Federal Reserve in the coming months, ”Seiberg said. “Those four votes would constitute a majority, which means they could block most bank mergers. We have not heard yet that Team Biden will prioritize antitrust views over monetary policy views for these posts. But it is worth watching. “

The White House order comes after the DOJ’s antitrust division last year began a review of the bank merger process, which hasn’t been updated since 1995.

Other initiatives in Biden’s executive order Friday could also have impacts on banks.

The White House is encouraging the Consumer Financial Protection Bureau to issue rules that would allow customers to download their banking data and take it with them when they switch banks.

The data portability issue has been swirling in policy circles as a way to help US consumers more easily manage their finances. But the White House order cast it also as a way to spark more competition in the banking sector.

The White House wants to “make it easier and cheaper” for consumers to take their business to a competitor, according to the statement Friday.

“Even where a customer has multiple options, it is hard to switch banks partly because customers cannot easily take their financial transaction history data to a new bank,” the White House said.

The president is also encouraging the Federal Trade Commission to establish new rules on surveillance and the accumulation of personal data. Those rules would be aimed at Big Tech companies, and while they would presumably not be limited to personal financial data, they could have implications for banks, which are increasingly competing against the tech giants.