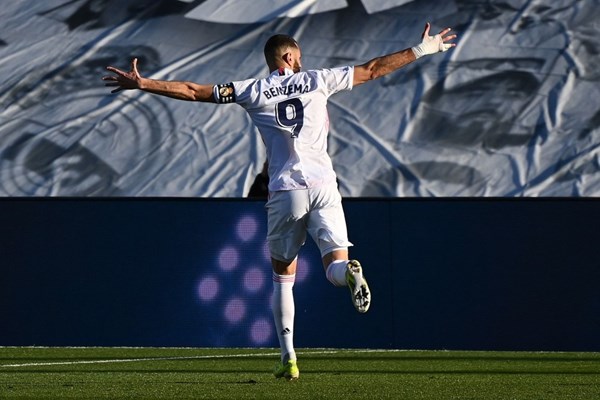 Karim Benzema scored two goals to lead his team Real Madrid to overturn a clean goal in front of Elche to a 2-1 victory during their Friday, Saturday, in the twenty-seventh round of the Spanish League, which also saw Deportview Alaves draw 1-1 with Cadiz.
Elche advanced with a goal scored by Daniel Calvo in the 61st minute, and Karim Benzema tied for Real Madrid in the 73rd minute, before the same player scored the second goal of Real Madrid in the first minute of the match’s stoppage time.
Real Madrid raised its score to 57 points in second place, temporarily pending the outcome of the Barcelona and Huesca match next Monday, and Elche’s balance stopped at 24 points in seventeenth place.
This is the first victory for Real after two consecutive draws, and the seventeenth victory for Real in the league in general, compared to a loss in four games and a draw in six, while this loss became the twelfth for Alche in the league this season, compared to winning in five matches and a draw in nine.
The start of the match came at a medium level, and Real Madrid quickly imposed its control over the course of the meeting, and continued its offensive attempts in search of scoring the goal of progress, in contrast, the Elche team retreated to the center of its stadium and relied on narrowing spaces, with counterattacks launched whenever the opportunity presented themselves.
Despite successive attempts by the two teams, but they failed to penetrate the other’s defense, which led to the limitation of playing in the midfield for most of this period.
And the two teams relied in their attacks on shooting balls from outside the penalty area, but it lacked accuracy, in addition to playing cross balls that defenders and goalkeepers dealt with brilliantly.
This half did not witness any serious attempts by the two teams, with the exception of one chance for Real in the 34th minute, when Vinicius Junior crossed a ground ball from the right side, Karim Benzema met her unmarked with a ground shot, but it passed next to the right post of goalkeeper Edgar Badia.
With the exception of that attack, there were no serious attempts on the two goals for the referee to blast the whistle at the end of the first half, imposing a negative tie between the two teams.
With the start of the second half, Elche’s team intensified its offensive attempts in search of scoring the lead, at the same time the Real team appeared confused, unlike the situation in the first half.
Elche’s team missed the opportunity to score the first goal in the 58th minute, when Fidel Chávez crossed the ground from the left, Guido Carrio met it with a powerful shot, but Thibaut Courtois, Real Madrid’s goalkeeper, shone and saved the ball.
In the 61st minute, Elche scored the lead from a corner kick that Daniel Calvo had risen to, and met it with a powerful header that hit the crossbar before crossing the goal line.
After the goal, Real organized its ranks, and began launching successive attacks on Elche’s goal in search of the equalizer, on the other hand, Elche retreated to the center of his stadium and relied on counter-attacks.
And Real Madrid managed to score the equalizing goal in the 73rd minute, when I played a short corner kick to Luka Modric, who played a cross from the left side, which Benzema raised to it and met it with a header into the goal.
Real’s attacking attempts continued to score the winning goal, which came in the first minute of the stoppage time of the match, when Karim Benzema hit a powerful ball from the borders of the penalty area to embrace his goal.
The remaining time of the second half passed without new, so the referee blew the whistle at the end of the match with Real Madrid winning 2-1.

Football Honka crushed in the VPS Cup, the HIFK match is postponed due to a coronavirus infection