Benavides, the Argentine who made history in the Dakar: ‘If I thought about the fears, I couldn’t even get on the bike’ 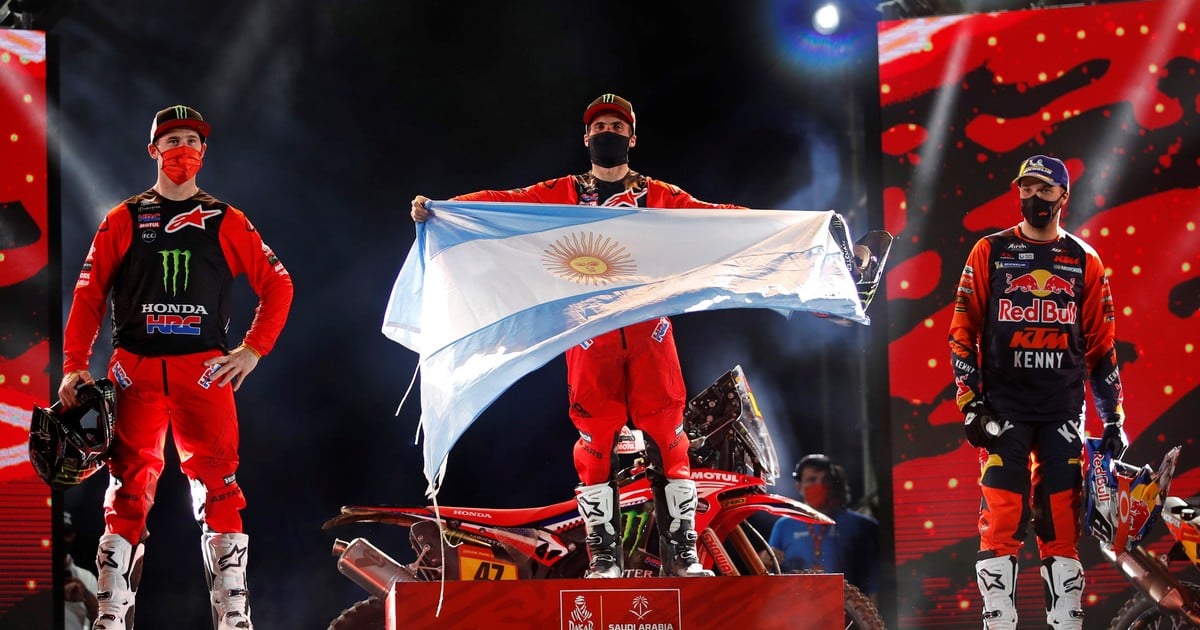 The hustle and bustle of flights, the protocol controls in times of pandemic, the reception of the governor and the fire engine ride to the monument to General Martín Miguel de Güemes in his native Salta have passed. Perhaps for the first time this year, and after winning the motorcycle category of the prestigious and very tough Dakar Rally (he is the first South American to do so), Kevin Benavides he allows himself to relax.

“There was a large caravan, everything was very nice”, he smiles from a distance, almost shyly and as if surprised by the show of affection of his people, the official Honda pilot and champion of the 2021 edition of the Dakar.

Benavides’s is quite an achievement. It’s true, there four other Argentines who have won this competition, the most difficult in the motor world: the brothers frames (3 times) and Alexander (2) Patronelli, Nicolas Cavigliasso and in this year Manuel Andújar, all of them consecrated themselves aboard their quadricycles.

The Salta, however, is the first winner on a motorcycle. Not only is it one of the two most recognized categories next to cars, but also the one that gave rise to the Dakar: it was on two wheels that Thierry Sabine he got lost during a competition, which gave him the idea for this contest.

It is also the most risky for pilots: in history it was charged 22 of the 27 lives that were lost because of the competition.

“We are aware that the risk in this race is very great, it is the most dangerous in the world and we know that obviously many things can happen, but we train for this and we are prepared,” says the champion, who adds: “I know that danger exists, that things can happen to me, But if I thought about the fears I couldn’t even handle When you go out to compete you don’t think about that. “

Benavides celebrates after the twelfth and last stage of the Dakar. Photo DPA

The Argentine knows well the risks that are run. You have lived them too closely not to know them. Last year, the Portuguese Paulo Gonçalves, of very close relationship with him, died in the seventh stage.

Far from changing the outlook, that situation – Kevin says – gives him “strength to continue doing great things.” He even assures: “Winning the stage on the one-year anniversary of his death was a way of honoring him.”

“He always told me that he would achieve this so this triumph is also dedicated to him, “he assures about his ill-fated friend. And what about Benavides himself? Did he think it possible?” Yes, I always thought I could, that’s why I persisted and kept fighting for that dream, because he knew he could do it. I didn’t know when, but I knew it was within reach“.

In this edition, the fifth in which he participates, Kevin found something different. “It had never happened to me in a Dakar, although it did in other races,” he says, thinking about the two ankle sprains and septum fracture nasal that suffered.

For this reason, but also because of the “roadmap and navigation” that the organization drew up, it defines it as “the most difficult” of the rallies it experienced. Which, of course, magnifies the achievement.

“The race had many ups and downs – Benavides evaluates -. It was changing very much (sic) all the time in the first week, the second not so much, but those changes are very emotional. The important thing was to be focused and calm. Also. It was very physical, the days were long and with technical and difficult stages, so it was very demanding, but I did a great workout in the year that helped me to endure “.

-Is there room for enjoyment in a setting of such technical, mechanical and physical difficulty?

-You do not enjoy it because you are not walking, but it is nice to be running. It is not enjoyed in the sense that you are not seeing the landscape, haha. The race yes, but within the framework of the competition, of the adrenaline of being there. You put on your own pressure, you are nervous, you think about what you have to do all the time. It is a special enjoyment.

Man, machine and flag. Benavides, his Honda and the Argentine colors. AFP photo

-One of your dedications of the title was for the psychologist Gustavo Ruiz. What have you worked with him?

-I started chatting with Gustavo in the middle of 2018. Obviously he’s focused on sports, but we also deal with a lot of issues on a personal level because you’re a pilot but first you’re a person and to compete well as an athlete you have to be well as a human being.

-And what do you feel you have achieved since you started frequenting it? Is it true that it accompanies you even during the Dakar?

-I feel that today I have greater responsibility, maturity, concentration and a lot of focus. We do a lot of exercises of this type and yes, it is true, during the race we talk every day and analyze each stage together, we propose strategies and objectives.

-And speaking of objectives, what’s next for you now? Is it easy to “settle in” to compete in races with less specific gravity than a Dakar?

–It is clear that the Dakar is the star race, but there is also the World Rally Championship, a very important title that I would love to achieve. Now I plan to rest well for a while and we will see what follows in the year. Surely I will do some dates of the World Cup, we will see how much is run by the issue of Covid, and obviously the Dakar next year. There I will be defending the title.

Anno 1800 getting harbor trading, tourism, and skyscrapers in third season of paid DLC