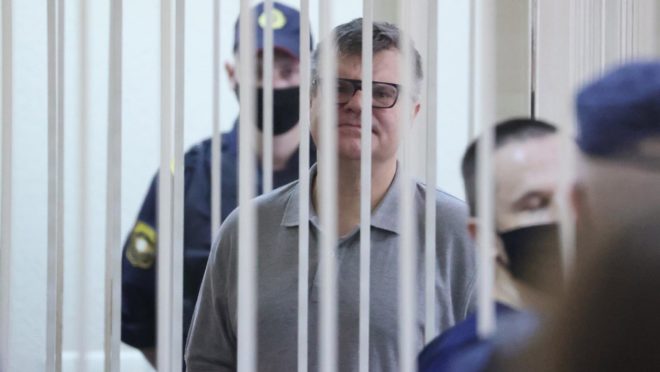 0
SHARES
0
VIEWS
Share on FacebookShare on Twitter
Former president of Belgazprombank, Viktor Babariko, in the defendant’s prison before the proclamation of his sentence in a court in Minsk, Belarus, July 6, 2021.| Photo: Ramil Nasibulin/BELTA/EFE

On Tuesday (6), the Belarusian Supreme Court sentenced businessman Viktor Babariko, former presidential candidate last year and one of the main leaders of opposition to President Aleksandr Lukashenko, to 14 years in prison.

The judges found Babariko, who has been in pre-trial detention since June 18, 2020, guilty of taking bribes as well as money laundering during a closed-door trial.

The 57-year-old opponent, considered a political prisoner by human rights organizations, was arrested while collecting signatures to present his candidacy for the August 2020 presidential election.

About a hundred people stood outside the Supreme Court’s headquarters today to express their support for Babariko, and only a small portion of them were allowed into the room where the sentence was handed down.

“I can’t plead guilty to crimes I didn’t commit. I don’t feel ashamed in front of my family because I didn’t commit any wrongdoing,” Babariko said last week at the sentencing hearing.

At the time, the Belarusian Attorney General’s office requested a 15-year sentence for the opponent.

“The cruel farce of the Belarusian judicial system has come to the fore with the conviction, which shows that the Lukashenko regime does not stop at anything to preserve power,” commented the US embassy in Minsk on Twitter.

In turn, Belarusian opposition leader in exile, Sviatlana Tsikhanouskaia, used the Telegram to describe as “demented” the condemnation of Babariko, a “person who decided to devote himself to politics and became one of the leaders who woke the country from a prolonged lethargy”.

The opponent’s defense assured that the conviction is based on “outlaw charges” and that it will fight with all means at its disposal to overturn it.

“Because the sentence is final, we are going to file an appeal for procedural supervision,” explained attorney Dmitri Laevski as he left the court. In addition, Barbariko’s lawyers plan to take the matter to the UN Human Rights Committee.

Laevski also said that his client had “taken calmly” at the Supreme Court’s verdict because “it’s not surprising” in the current circumstances. “But it’s a temporary decision,” he insisted, alluding to the defense’s intention to still obtain an acquittal from Babariko.